This text is tied together with the Purification of Mary (Feb. 2) 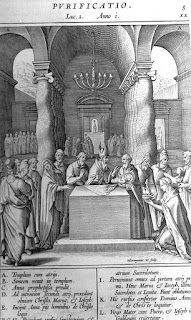 33 And Joseph and His mother marveled at those things which were spoken of Him. 34 Then Simeon blessed them, and said to Mary His mother, “Behold, this Child is destined for the fall and rising of many in Israel, and for a sign which will be spoken against 35 (yes, a sword will pierce through your own soul also), that the thoughts of many hearts may be revealed.”
36 Now there was one, Anna, a prophetess, the daughter of Phanuel, of the tribe of Asher. She was of a great age, and had lived with a husband seven years from her virginity; 37 and this woman was a widow of about eighty-four years, who did not depart from the temple, but served God with fastings and prayers night and day. 38 And coming in that instant she gave thanks to the Lord, and spoke of Him to all those who looked for redemption in Jerusalem.
39 So when they had performed all things according to the law of the Lord, they returned to Galilee, to their own city, Nazareth. 40 And the Child grew and became strong in spirit, filled with wisdom; and the grace of God was upon Him.

33 And Joseph and his mother marvelled at those things which were spoken of him.

The Evangelist calls Joseph the father of the Lord Christ, because the people called him so, on account of Mary being his espoused wife.

They marvelled at these things. To Joseph and Mary these words were a great marvel; for the prediction that he should be a light to the Gentiles had not been so clearly expressed by the angel as by this Simeon. Therefore we must not imagine that they marvelled because they did not believe this, but it is an indication of a great faith and eminent judgment. For this is the peculiar manner of faith, that the more firmly one believes anything to be God’s word the more he marvels and rejoices over it.

Mary marvelled not that she was the mother of this child, but at “those things that were spoken of him,” as all Christians do, who regard not what they are, but what is spoken of them.

With the marvelling is also indicated, that when God’s word is preached it is never without fruit. Isaiah 55:11.

34 And Simeon blessed them, and said unto Mary his mother, Behold, this child is set for the fall and rising again of many in Israel; and for a sign which shall be spoken against;

Simeon blessed them. Our God comforts the lowly, who are to pass through a wonderful experience.

Set for the fall and rising of many. Why does he say this and what follows to the mother, and not also to the father? He touches here upon nature, and mentions the natural mother. Perhaps it was also because Joseph would not live to see the sufferings of Christ.

Three kinds of people. He speaks especially of three kinds of people who are always on earth. The first are those who are offended at the truth and forsake it. The second are those who, with Daniel and his companions, say in their hearts, All that thou hast done unto us was right. They improve by the truth. The third are the great multitude, who forcibly resist it with intrigue and craft, are not satisfied to be offended at it, but wish rather to crush and suppress the truth. These commit two kinds of sin: First, that they oppose it, and then do not want to be regarded as sinners and doing wrong.

Christ is the object at which every one aims; all opposition aims only at him, and though the opponents contradict one another most vehemently, yet they are unanimous in opposing Christ. Psalm 2:1-2.

A sign spoken against. When men do this openly, devils must do it secretly, and these are very heavy temptations to unbelief, despair and blasphemy. But the word also adds a consolation; he says, He shall be a sign that shall be spoken against, but shall not be overthrown or destroyed.

The stone of offense. But the greater part is so mad and foolish, and will not rely on this stone, but rush upon it with their head and stumble at it. That is not the fault of the stone, but it is the fault of those foolish, blind people, who fall upon it and are dashed to pieces, whereas God has placed it there that they should believe on him, rise and be saved by him. Isaiah 28:16.

As the falling belongs only to them who already stand, so the rising comes only to those who regard themselves as poor, miserable sinners, that have deeply fallen. 1 Peter 6.

35 (Yea, a sword shall pierce through thy own soul also) that the thoughts of many hearts may be revealed.

A sword shall pass through thine own soul also. When the Virgin saw that her innocent Son had been condemned, it cut through her heart, especially his crucifixion. And not she alone had to see and experience the malice of the world, but the whole Christian Church at all times, when the light of the gospel shines. 2 Peter 2:6-8.

Thoughts of many hearts revealed, but not the thoughts of all. The thoughts of Christ and of his little flock and their hearts are revealed to every one; for he states plainly that every one can see very well the state and condition of his heart. But the great apparent saints we do not know; they are regarded as the holiest people, and yet they are not. Certainly the gospel has no worse enemies than those who are regarded as high, discreet, wise, virtuous and holy before the world.

36 And there was one Anna, a prophet ess, the daughter of Phanuel, of the tribe of Aser: she was of a great age, and had lived with an husband seven years from her virginity;

St. Anna, a prophetess. Will you fast and pray with this Saint Anna? very well; but see to it, that first you follow the person and then her works; first become an Anna.

In the first place, St. Luke says she was a “prophetess;” no doubt, a holy, pious prophetess; then certainly the Holy Ghost was in her, therefore the succeeding works were also good and righteous.

37 And she was a widow of about four score and four years, which departed not from the temple, but served God with fastings and prayers night and day.

A widow. Secondly, He praises her as a widow who remained in her calling. Thus do you likewise look to your position, and you will find enough good works to do, if you will be pious.

Fasting means all kinds of discipline and mortification of the body, which is not entirely pure from sin and evil inclinations, though the soul may have become righteous. and holy by faith (1 Corinthians 9:27; 1 Peter 2:5) The other part of divine service in which the soul is offered to God is “prayer,” by which is understood, not merely the oral prayer, but every thing that the soul does by hearing, speaking, meditating and undertaking in God’s word.

Day and night. This is to be understood that with such work she was occupied day and night.

38 And she coming in that instant gave thanks likewise unto the Lord, and spake of him to all them that looked for redemp tion in Jerusalem.

She coming in that instant. By this a great personal honor is shown to this holy woman, that she enjoyed this grace in preference to so many great people, because she recognized the poor child as the true Savior.

The word of God concerning Christ is discerned only by the hungry souls who look for redemption.

If thou wilt have Christ and his gospel, thou must have him not other wise than he is presented to thee in this gospel. Therefore consider that thou must hold to Christ for the resurrection, that he be no prodigy to thee; thou wilt not be able to make the devil and the ungodly pious. But do thou remain near to him who is our holiness and our resurrection, and do not be alarmed when others turn back and fall away. The devil leads the world into error; but those are thirsty and soon run into the errors. Therefore it is not our fault, nor the fault of the Lord Christ, that the devil causes the fall of the ungodly, but it is the fault of the ungodly. And because you hear that Christ will be a terrible sign to the ungodly, do you uphold yourself by him against fanatical spirits and be not alarmed in your conscience.

39 And when they had performed all things according to the law of the Lord, they returned into Galilee, to their own city Nazareth. 40 And the child grew, and waxed strong in spirit, filled with wisdom: and the grace of God was upon him.

fulfilled according to the law. They returned into Galilee, to their own city Nazareth, either from Egypt, or as it seems to me, immediately after the six weeks (v. 22,) and the appearance of the angel (Matthew 2:13) took place at Nazareth. By this the holy cross is painted the better. Thus the Lord Christ begins his pilgrimage from the time of his birth, and constantly pilgrims in this earth, having no abiding place.

And the child grew. What more could Luke have written? The time had not yet come that he should perform miracles. (John 2:11; Acts 20:37f) He appeared and was brought up like other children, only that he waxed stronger than other children, for his appearance was nobler, and the gifts of God were richer in him than in others. We must understand the words of Luke in regard to the humanity of Christ in the simplest sense. The Spirit was in him from the beginning of his conception; yet just as his body grew, and his reason increased in a natural way, so also the Spirit descended upon him more and more.