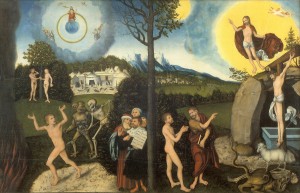 Once again this year, I had the unfortunate privilege as a called and ordained servant of the Word to help usher out the Church Year by preaching from one of the last three parables that Jesus told before He was arrested and crucified – parables that, as far as the people listening in the immediate Biblical context were concerned, probably played into the heavenly Father’s timeline and sealed the Lord’s fate.

I think that when a lot of folks these days try to imagine a scene where Jesus is teaching by way of a parable, in their mind’s eye it almost always has the gentle cartoonlike contours of a gathering of little ones at the feet of a tender bearded pre-school teacher with flowing locks and a bright beaming sunshine rising just over His shoulder. Maybe there’s even a butterfly flittering around a lamb sitting nearby. The Jesus in the image is very tame, very non-threatening.

Well, if there is ever a Sunday when that image is completely decimated, it is the Last Sunday of the Church Year.

We use the Historic Lectionary here at Our Savior in Hartland, Michigan, and so the Gospel reading for the Last Sunday is Matthew 25:1-13, the Parable of the Ten Virgins. That parable, no matter how you work with it, is a parable of judgement – just like the two parables that follow. There is Gospel in these parables, to be sure, and yet as an exegete you often find yourself digging deep into the loam to locate it, and then you contemplate prayerfully to be sure it is handled faithfully and thereby it shines brightly. And still, as you passed through layer after layer of concrete-like urgency, you realized that as the one charged with preaching the text purely (not necessarily forcing a Law/Gospel formula, or as Rev. Dr. David Scaer once sounded off – telling people off for five minutes and then telling them it will be okay for another five), you see that the most prominent elements of this text’s soul comprise a prescriptive warning that we be ready for His return at the Last Day. There is no way to faithfully preach this text and yet avoid the fact that the common mainstream Christo-American image of the gentle Shepherd is overshadowed by the imposing Divine Magistrate who will be standing upon the crossover of the eternal horizon at the Last Day.

This is startling to most, and here’s why.

I started this little expedition by saying that the preaching task involved with the Last Sunday of the Church Year was an unfortunate one. It was unfortunate because as a preacher, I am well aware that the postmodern world of listeners highly prizes and prefers the cartoon Jesus as opposed to the creedal Judge who comes to render a final verdict upon “both the living and the dead.” The postmodern listener prefers a Jesus who isn’t ever really frustrated with us for this or that reason, but rather is pretty much going to accept all of us just as we are and no matter what we believe or disbelieve about Him. But again, the text of Matthew 25:1-13 communicates differently. It sternly requires that we understand and embrace the reality that when the earth has finally come undone and the locales of our future existence – heaven or hell – are bearing down upon us, Jesus will indeed be standing there, but He won’t be in place to embrace and usher everybody into the eternal glories of heaven. To some, He’ll speak the terrifying words: “I don’t know you.” He’ll shut them out, and they will exist in the everlasting exclusion of condemnation.

Pastors – good luck preaching this to anyone these days without experiencing at least a minimal backlash of concerned stares from the pews.

I would also offer to the perusing parishioners that if you did not hear this at least in part in the preaching for the Last Sunday of the Church Year, then a very important measure of the intended Law was left out. Additionally, might I suggest that this may have occurred because your pastor fears your sensitivity? And he has a good reason to, doesn’t he? He knows that you, someone he went into the service calling a friend, may exit the service as his enemy. And not only that, he knows that this particular text paints him into a corner and the only way to twist himself out would be by lowering its tone and perhaps preaching it as some sort of “your best life now” moralization. You know, kind of a “God helps those who help themselves” or “the early bird gets the worm” kind of a thing. Surely, that kind of hectoring is possible with a parable that emphasizes preparedness.

But that’s not the message of this parable, and that’s not the task of your pastor. He must preach what he’s been given. And never does this gift contain that kind of message. In fact, Saint Paul said that the pastors who chicken out are the ones the world ends up adulating and yet by doing so, they are leading the sheep through the wide gate of destruction. The other guys – guys like your pastor – they know that the narrow gate is one that requires preaching the text purely with the possibility of harm, hatred, and sometimes even death, just like the One who first preached these parables in Jerusalem; the same One who gave your pastor the preaching job in the first place.

And so with that, love your pastor. Love him even when he warns you. Love him even when the message is harder than usual to hear. Be hasty not to be offended but rather listen even more intently for the soothing message of salvation that will most certainly be there in every sermon, even when the Law seems a little more prominent. And besides, there is a divine love hiding in that Godly warning. It is there precisely because God would not see you lost to the ignorant tragedy of an oil-barren lamp incapable of producing a fiercely lit flame of faith. And so again, even when the sermon seems a little heavier, a little fiercer, a little sharper, God is caring for you through your pastor. He is not failing to love you completely because He is not failing to make you aware of those things that trouble the heart and soul in order that the Gospel, even if it is only a sliver, would never be robbed of its splendor.