When I was a second year seminarian in the spring of 2006, my friend and fellow seminarian Mark Preus gave me one of the greatest gifts I have ever received.  It was a copy of the Kirchengesangbuch für Evangelisch-Lutherische Gemeinden (Church Hymnal for Evangelical Lutheran Congregations).  Commonly known in our day as “Walther’s Hymnal”, it was the first and only German hymnal used in the Missouri Synod.  Compiled by C.F.W. Walther way back in 1847, this hymnal was a foundation of Missouri Synod devotion for roughly six decades.  The copy I was gifted was a somewhat small book which came in a blue hardcover.  On the inside cover there was a stamp from Bethlehem Ev. Lutheran Church of Evanston, Illinois.  I felt like Mark had given me a treasure chest full of gold – only that the chest had a lock on it.  In whatever spare time I had I was trying to pick up theological German, but the contents of the German hymnal remained for the most part sealed to me – just as it had been sealed for most Missouri Synod Lutherans for a very long time.  I had a feeling I had something great in my hands, but there was no way to know for sure. 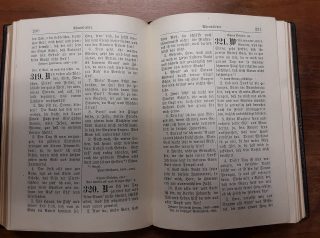 Having studied in Germany for the 2007-2008 academic year, I was privileged to acquire the German competency necessary to open my treasure.  As I paged through that hymnal with new eyes, I realized that I was given a special deposit, maybe the greatest collection of orthodox Lutheran hymnody on American soil.  These were the best words which gave voice to my faith, and my rightful heritage as a Missouri Synod Lutheran.  No doubt, I learned how the transition to English was hard on the Missouri Synod.  And not because German is somehow a more holy or superior language to another.  Rather, it is the reality that any language transition is a monumental shift.  When you are even talking about transitioning the language in which you worship, treasures of devotion will fall through the cracks.  Treasures were lost from Walther’s Hymnal when the Missouri Synod went to English.  Over half of the hymns disappeared.  Very many verses from Martin Luther and Paul Gerhardt were lost.  Hymns that dealt with realities of a broken world, like severe weather, drought, and war, were lost.  There were over 30 hymns which addressed death and dying.  Many of those hymns were bold enough to address a parent’s worst nightmare, the death of a child.  The majority of these hymns were lost.  We have needed these hymns, and recent generations have had to fend without them.  To be sure, paging through Walther’s hymnal has shown me that our modern Missouri Synod has much to learn from our past, treasures we never knew existed.

Over the years now serving in the parish, I have collected a handful of these hymnals here and there.  Some editions are beautiful books.  They have elegant black leather bindings, gilded pages, and a beautiful German script.  Their quality was excellent.  I still use one of these regularly for shut-in calls, which is in great shape even since 1923.  Having served for two years now in Southeast South Dakota, I have gathered that it must have been tradition in this area to present one of these hymnals to the newly confirmed.  They would have their names engraved in gold on their hymnals with their confirmation date.  These hymnals were also used heavily.  Some of my members have their confirmation hymnal held together today by a rubber band, these hymnals were used so much.  They did not have the excess resources which we use today, using endless reams of paper to print the propers for the day or even the whole worship service.  They used their hymnals and loved them.  They were all they had, and they were all which was needed.  Walther’s Hymnal cultivated a real Lutheran piety in the people, and it was no small part in making the Missouri Synod a strong, great church body. 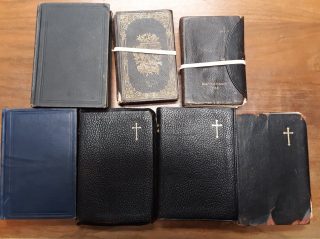 Matthew Carver did the church a tremendous service with his English translation of Walther’s Hymnal in 2012.  Sometimes I think it is one of the greatest contributions of this generation.  Now everybody can look inside and see what a treasure this hymnal is.  But sadly, I doubt you will find Carver’s translation in many places outside the bookshelves of a few pastors and faithful laymen.  I am unaware if it actually sits in any pew racks.  Nevertheless, it is my hope that Carver’s work will serve as the starting point for the compilation of a future English hymnal in our synod.  It is an incredible asset which was unfortunately unavailable for too long.

Even though Walther’s Hymnal is available in English today, I encourage you to remain on the lookout.  Perhaps your elderly relative has one of these beautiful old hymnals.  There might be a stash hidden away in your church somewhere.  Wherever you find them and whatever you do, do not throw them away.  Pass them on to posterity.  Give them to someone who cares.  As our synod has been in decline for so long, it would be wise for us to take notice what we were doing when our synod best flourished.  Walther’s Hymnal was everywhere during what was arguably our synod’s strongest days in the late 19th and early 20th centuries.  If we would have strong congregations again, Walther’s Hymnal might not be in the pew racks, but the spirit and devotion of that hymnal will be alive in the hearts of Missouri Synod Lutherans.  It is a spirit which is sacramental, catechetical, liturgical, and above all evangelical.  It is Lutheran song at its best.