In answer to Nicodemus’s query about God and being born again into His kingdom, Jesus reveals the persons, work, and relationship of the Father, the Son, and the Holy Spirit. Thus, it is this one God in three persons whom we adore in the belief, confession, and life of the Baptized in His Church.  [Rev. Kurt Hering] 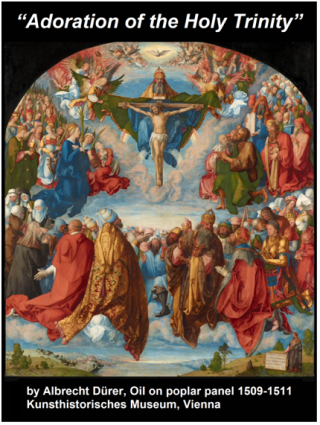 A READING FROM THE BOOK OF CONCORD
THE FEAST OF HOLY TRINITY
GOSPEL LESSON:  John 3:1–17
FORMULA OF CONCORD: SOLID DECLARATION
ARTICLE XII.37-40 OTHER FACTIONS, HERESIES AND SECTS.

ERRONEOUS ARTICLES OF THE NEW ANTI-TRINITARIANS

37] 1. Also, when some Anti-Trinitarians reject and condemn the ancient approved symbola, Nicaenum et Athanasianum (the Nicene and Athanasian creeds), as regards both their sense and words, and teach that there is not only one eternal divine essence of the Father, Son, and Holy Ghost, but as there are three distinct persons, God the Father, Son, and Holy Ghost, so each person has also its essence distinct and separate from the other persons; yet that all three are either as otherwise three men, distinct and separate in their essence, of the same power, wisdom, majesty, and glory [as some imagine], or in essence and properties unequal [as others think].

39] These and like articles, one and all, with what pertains to them and follows from them, we reject and condemn as wrong, false, heretical, and contrary to the Word of God, the three Creeds, the Augsburg, Confession and Apology, the Smalcald Articles, and the Catechisms of Luther. Of these articles all godly Christians should and ought to beware, as much as the welfare and salvation of their souls is dear to them.

40] Since now, in the sight of God and of all Christendom [the entire Church of Christ], we wish to testify to those now living and those who shall come after us that this declaration herewith presented concerning all the controverted articles aforementioned and explained, and no other, is our faith, doctrine, and confession, in which we are also willing, by God’s grace, to appear with intrepid hearts before the judgment-seat of Jesus Christ, and give an account of it; and that we will neither privately nor publicly speak or write anything contrary to it, but, by the help of God’s grace, intend to abide thereby: therefore, after mature deliberation, we have, in God’s fear and with the invocation of His name, attached our signatures with our own hands.

(You may download a letter size pdf file The Feast of Holy Trinity Sunday Bulletin Insert from this link.)