“The Good Shepherd and His Sheep”

“I am the good shepherd. The good shepherd gives His life for the sheep. But a hireling, he who is not the shepherd, one who does not own the sheep, sees the wolf coming and leaves the sheep and flees; and the wolf catches the sheep and scatters them.  The hireling flees because he is a hireling and does not care about the sheep. I am the good shepherd; and I know My sheep, and am known by My own. As the Father knows Me, even so I know the Father; and I lay down My life for the sheep.  And other sheep I have which are not of this fold; them also I must bring, and they will hear My voice; and there will be one flock and one shepherd.”  John 10: 11-16 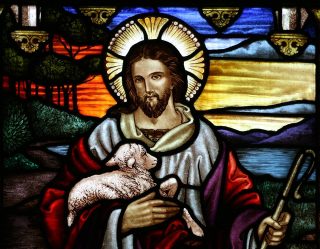 We Christians confess that Jesus is Lord.  You can see that he is a man.  He suffers and dies on a cross.  Yet he is the Lord God.  King David, who as a boy had been a shepherd, wrote the psalm that begins with the words: “The LORD is my shepherd, I shall not want.”  When Jesus says “I am the good shepherd,” he is hearkening back to that psalm, saying that he is the LORD God that David confessed to be his shepherd.

Today, let us take to heart four things that God teaches us about the Good Shepherd and his sheep:

First, the Good Shepherd lays down his life for the sheep;

Second, the Good Shepherd gathers his flock through his word;

Third, the Good Shepherd knows his own and reveals himself to them;

The Good Shepherd lays down his life for the sheep.  As we sang during Lent:

What punishment so strange is suffered yonder;

The Shepherd dies for sheep that loved to wander. 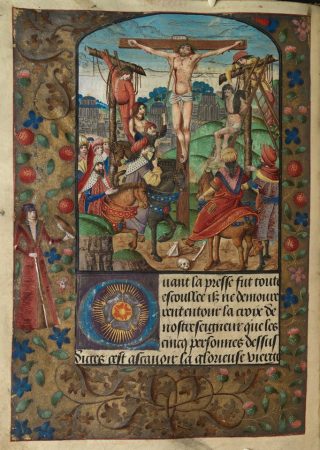 To do what you think is right and to rely on your own thinking is to create a problem that you cannot fix.  To trust in your feelings or the quality of your character or the sincerity of your intentions is to rely on sinking sand.  Sheep cannot solve the problems they make for themselves.

The crucifixion of Jesus on Calvary is God’s solution to our problems.  We can’t fix what we’ve broken.  We turned away from God, ran off, got lost, and were unable to find our way back to God.  We were helpless.  As Isaiah writes,

All we like sheep have gone astray;
We have turned, every one, to his own way;
And the Lord has laid on Him the iniquity of us all. Isaiah 53:6

By taking our iniquity – our sin – off of us and laying it on Jesus, God has delivered us from our sin.  He has broken its power over us.  He confronted all human evil with his innocence.  On Calvary, he crushed the lying head of the accuser and set us free.

His resurrection proves it.  He showed his disciples his hands and his side, displaying the wounds he received when he was bearing and removing the sin of the world, proving that he, who died, was risen from the dead.  To die for us and to rise again would not help us if we did not hear of it, rely on it, and receive its benefits through faith.

And other sheep I have which are not of this fold; them also I must bring, and they will hear My voice; and there will be one flock and one shepherd.

What does his voice say?  How does it sound?  He who went to the slaughter in the stead of his sheep, who bore their punishment, who gave his life for them to take away their sin, what does he say?  He says who he is.  “I am the good shepherd.”  He says what he does.  “The good shepherd gives his life for the sheep.”  This saying is giving.  The voice the sheep hear is the voice of the gospel.  It is the voice of forgiveness, peace, and eternal life.  The Good Shepherd gathers his flock through his word.  He speaks.  They listen.  They hear his voice.  They won’t listen to the voice of the stranger because they don’t know his voice.  They are sheep.  They’re not dogs.  Dogs are gullible.  They follow whatever voice promises them a treat.  Sheep are not so trusting.  They don’t trust just any voice.  They recognize their shepherd’s voice and won’t listen to another. 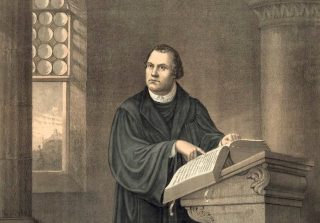 The voice of the Good Shepherd is the pure preaching of the gospel and the right administration of the sacraments.  Jesus, who died and rose to redeem his sheep, setting them free from sin and death and the devil’s control, cares for his sheep through the ministry he has established in and for his church.

The “other sheep” Jesus mentions are the Gentiles.  He came first to the Jews.  Then he went to the Gentiles.  He goes where his church goes.  He goes where his gospel is proclaimed.  He doesn’t gather his sheep together through false teachings and human opinions.  The hireling doesn’t preach Christ, but his own ideas.  He sees the wolf coming and he runs away because he cannot withstand the wolf.  Christ’s true ministers always preach Christ.  If you want preaching on how you can fix your own life by following tried and true principles of spiritual success, go and find a church where the hireling will say whatever scratches where you itch.  But when the wolf attacks, you’ll be on your own.

The Christian religion isn’t a system of morality or a program for success.  It isn’t a list of rules which, if followed, will lead you to your goal.  The Christian religion is summarized by Jesus in the words he spoke to the apostles on the day he rose from the dead.  He said, “Whosever sins you forgive, they are forgiven; whosever sins you retain, they are retained.”  The Good Shepherd gathers his sheep into one fold by preaching to them the law that exposes their sins to their conscience and the gospel that brings them forgiveness of sins from God himself.

I am the good shepherd; and I know My sheep, and am known by My own. As the Father knows Me, even so I know the Father.

Jesus knows his sheep.  He doesn’t just know about them.  He knows them.  He knows them with an intimacy closer than any merely human knowing.  Jesus knew his sheep from eternity.  He loved them before time began.  The Father who knows the Son and the Son who knows the Father lived in perfect love with the Holy Spirit from eternity.  And in eternity, God chose his sheep.  He predestined them to be conformed to the image of Christ.  Those he predestined, he called.  Those he called, he justified.  Those he justified, he glorified.

Jesus knows his sheep.  He is the eternal God.  He is the eternal Son who shares eternal love with his Father.  He entered into time and into the human race and was born by the Holy Spirit of the Virgin Mary.  He became one of us and endured all we endure, suffered all we suffer, and experienced as a man what all of us experience.  He did not commit the sins we committed, but he bore their guilt and punishment.  He knows us better than we know ourselves. 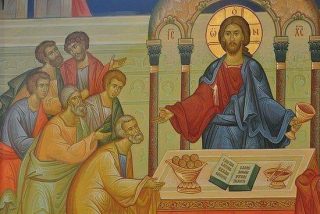 And we know him.  We know him because he knows us and calls us to himself.  He sends the Holy Spirit who draws us to him so that we can know him by faith.  Then the Holy Spirit reveals to our broken and contrite hearts the love of God displayed on Calvary, he washes our conscience clean, sets us at peace with God, gives true knowledge of God, and makes us members of his church.

“Oh, I don’t care about organized religion.  I have my own kind of spirituality.”  Of course, you do.  It is the spirituality of death.  It’s the spirituality of wandering into error after error, being trapped in a crevice on a cliff, falling to the ground, breaking your leg, and being devoured by a hungry wolf.  If you don’t know the Good Shepherd, you are lost.  You are without hope.  You are helpless in your sins.  You don’t have life.  You have only death and hell in your future.  Solomon writes,

There is a way that seems right to a man,

Outside of Christ, outside of knowing God in Christ’s death and resurrection, lies spiritual blindness.  Jesus is the only way to heaven.

This brings us to the fourth thing that God teaches us about the Good Shepherd and the sheep: the Good Shepherd gives his sheep eternal life.  We read, later on this this chapter of St. John, these words of Jesus:

My sheep hear my voice, and I know them, and they follow me.  I give them eternal life, and they shall never perish, neither shall anyone snatch them out of my hand.  (John 10:27-28)

We live in dying bodies.  We live in bodies infected by every kind of sinful desires.  We live surrounded by death.  We live in a dying culture.  But in the midst of sin and death, we, the sheep of the Good Shepherd, have eternal life.  We are headed for heaven!  No one can take this away from us.  We hear the voice that gives it to us.  Nothing in our lives is as precious as that voice.  Hearing it, trusting it, we rest secure in the care of the Good Shepherd.