(You may download a letter size pdf file Fifth S. of Easter (Cantate) Bulletin Insert from this link.)

Our Lord Christ sends the Holy Spirit to convict us of the depth of our sin and its impact, as well as the breadth of righteousness that is in Him.  [Rev. Kurt Hering] 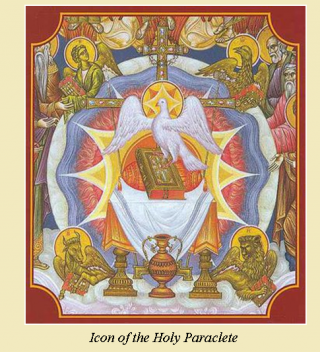 A READING FROM THE BOOK OF CONCORD
CANTATE: EASTER 5
GOSPEL LESSON:  John 16:5–15
THE APOLOGY OF THE AUGSBURG CONFESSION
ARTICLE II: ORIGINAL SIN

15] Neither have we said anything new. The ancient definition understood aright expresses precisely the same thing when it says: “Original sin is the absence of original righteousness” [a lack of the first purity and righteousness in Paradise]. But what is righteousness? Here the scholastics wrangle about dialectic questions; they do not explain what original righteousness is. 16] Now in the Scriptures, righteousness comprises not only the second table of the Decalog [regarding good works in serving our fellow-man], but the first also, which teaches concerning 17] the fear of God, concerning faith, concerning the love of God. Therefore original righteousness was to embrace not only an even temperament of the bodily qualities [perfect health and, in all respects, pure blood, unimpaired powers of the body, as they contend], but also these gifts, namely, a quite certain knowledge of God, fear of God, confidence in God, or certainly 18] the rectitude and power to yield these affections [but the greatest feature in that noble first creature was a bright light in the heart to know God and His work, etc.]. And Scripture testifies to this, when it says, Gen. 1:27, that man was fashioned in the image and likeness of God. What else is this than that there were embodied in man such wisdom and righteousness as apprehended God, and in which God was reflected, i.e., to man there were given the gifts of the knowledge of God, the fear of God, confidence in God, and the like?…

23] Therefore the ancient definition, when it says that sin is the lack of righteousness, not only denies obedience with respect to man’s lower powers [that man is not only corrupt in his body and its meanest and lowest faculties], but also denies the knowledge of God, confidence in God, the fear and love of God or certainly the power to produce these affections [the light in the heart which creates a love and desire for these matters]. … From these facts it appears that the ancient definition says precisely the same thing that we say, denying fear and confidence toward God, to wit, not only the acts, but also the gifts and power to produce these acts [that we have no good heart toward God, which truly loves God, not only that we are unable to do or achieve any perfectly good work].

The text used here is from Triglot Concordia: The Symbolical Books of the Evangelical Lutheran Church: German-Latin-English. These texts are in the public domain, can be found online @  http://bookofconcord.org, and may be  freely copied.