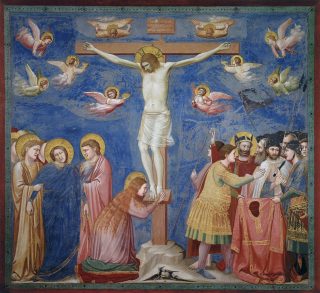 “Behold, the storm of the Lord! Wrath has gone forth, a whirling tempest; it will burst upon the head of the wicked. The anger of the Lord will not turn back until he has executed and accomplished the intents of his heart. In the latter days, you will understand it clearly.” Thus it is written in Jeremiah 23. Woe to the wicked! Woe to those who have sinned! The wrath of God will overcome them. Can a man outrun a tornado? Can a ship sail faster than a hurricane? So also the wicked will not escape the wrath of God.

We deserve to be numbered among the wicked. If “wicked” seems like too strong a term, consider that there is no such thing as a light sin in the sight of God. “Whoever keeps the whole law but fails in one point has become accountable for all of it,” as it says in James 2. So why are we not accounted wicked and swept away by the wrath of God?

It would be foolish to pretend that we don’t know the answer to this question. “In the latter days, you will understand it clearly,” saith the Lord. “The latter days” refers to the days of Christ. And we do understand this clearly. The latter days have come and the wrath of God burst upon the head of our dear Lord Jesus Christ. “Behold, the storm of the Lord! Wrath has gone forth, a whirling tempest.” Today we understand it most clearly, though it still causes us great wonder.

“Surely he has borne our griefs and carried our sorrows; yet we esteemed him stricken, smitten by God, and afflicted. But he was wounded for our transgressions; he was crushed for our iniquities; upon him was the chastisement that brought us peace, and with his stripes we are healed.” Jesus, the eternal Son of the Father now made flesh, Jesus, the spotless Lamb of God that taketh away the sin of the world, Jesus, the righteousness of God was made to be sin who knew no sin, so that in him we might no longer be accounted wicked, so that in him we might become the righteousness of God (2 Cor. 5:21).

Our Savior Jesus was arrested to set us free. Jesus was accused that no accusation would stand against us. Jesus was condemned that we might be acquitted. Jesus was mocked and spit on to lift up our faces and turn away our shame. Jesus was flogged in order to atone for our disobedience. Jesus was led as a lamb to the slaughter for the sake of us sheep who had gone astray. Jesus was numbered among the wicked so that we might be numbered among the righteous. Jesus was blasphemed that we might be honored. Jesus cried, “My God, my God, why have you forsaken me?” so that God would never leave us nor forsake us. Jesus thirsted like the rich man whose tongue was parched in the fires of hell that we, poor as we are, might be comforted with Lazarus in the courts of heaven. Jesus took the wages of our sin, which is death, in order to grant us by his merits the gift of eternal life.

On Jesus God’s wrath was spent. To say that we deserve worse than he suffered would be to insult his Passion and be left in doubt concerning the forgiveness of sins. Jesus has taken everything that you deserved to suffer. You have no debt that is left unpaid. This is freeing in two ways. 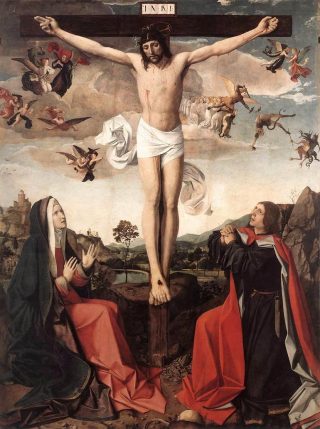 First, you don’t have to be like the unbelieving world that hates the Law of God and cannot stand to be told that it’s wrong. The world must try to justify itself because it does not know the righteousness of Christ. Therefore the world won’t call anything a sin but tries to make wrong right and black white and yet the wicked one only ends up more wicked still. However, since you know Jesus Christ by faith, who is a rich benefactor to us debtors, you don’t have to be afraid to hear that you have a debt. Since Christ always and freely offers the forgiveness of sins, it’s not the end of the world to hear that you have sinned. Sin is serious, and the blood of our Lord is not license to sin, yet why did Christ shed his blood if not to give us comfort when we come to a knowledge of our sins? Therefore, because of the sacrifice of Christ, you can sing with the psalmist, “Lead me in the path of your commandments, for I delight in it” (Ps. 119:35), “Oh how I love your law! It is my meditation all the day” (Ps. 119:97). The Law of God will instruct the new man and curb the old man, and convict of sin. Yet clothed in the righteousness of Christ and protected with the armor of his innocence we need not fear conviction by the Law, but can see the Law as the good gift that God intended it to be.

Second, when we reflect on the severity of Christ’s suffering and the greatness of his obedience, we receive the comfort that no sin is left unforgiven. What transgression could possibly be greater than the blood of Christ, which he shed not only from the stripes of the lashes and the holes of the nails and spear, but from every pore in his body, so deeply was he committed to your salvation? If the Lamb of God has taken away the sin of the world, then he has taken away every sin from every individual. Thus when the devil torments your conscience and holds up a single sin and tries telling you that this one sin is the deal breaker and now you’re doomed to hell, you can laugh in joy and say, “What is that to the blood of Jesus?” Certainly, there’s no such thing as a light sin, meaning a sin that doesn’t require the death of God himself to atone for it. But now Christ has atoned for sin and every sin is light to him. Thus we can sing, “Now hell, it’s prince the devil, / Of all their pow’r are shorn; / Now I am safe from evil, / And sin I laugh to scorn” (LSB 467:4).

“Wrath has gone forth,” and the latter days have come, and we do understand it clearly. We understand that Christ has borne the wrath of God for our sake, and in him, we are no longer wicked, but righteous. Praise be to the Father who offered his Son for our salvation. Praise be to the Son who willingly suffered for our sins. Praise be to the Holy Spirit who has given us faith in Christ, laid him in the cavern of our hearts, rolled the stone into place, and sealed it with Holy Baptism. Amen.

(I drew much inspiration for this sermon from the “Lutheran Prayer Companion,” particularly the meditations on the sufferings of Christ on pages 190-194)