Very early in the morning, on the first day of the week, they came to the tomb when the sun had risen.  And they said among themselves, “Who will roll away the stone from the door of the tomb for us?”  But when they looked up, they saw that the stone had been rolled away; for it was very large.  And entering the tomb, they saw a young man clothed in a long white robe sitting on the right side; and they were alarmed.  But he said to them, “Do not be alarmed. You seek Jesus of Nazareth, who was crucified. He is risen! He is not here. See the place where they laid Him.

The women discovered the empty tomb on Sunday morning.  Jesus died at three o’clock in the afternoon on Friday.  At sunset Friday, the Sabbath began.  The Sabbath was the day of rest.  They could not go to the tomb to anoint Jesus’ dead body on Saturday.  The Sabbath ended at sunset on Saturday.  Since there had been not time to give Jesus’ body proper care before the sunset on Friday, the first chance the women had to do so was early Sunday morning.  So they went to the tomb as the sun was rising on Sunday.  They went to see Jesus’ dead body.  But it was not there.  The tomb was empty.  The young man sitting on the right side of the tomb was an angel, a messenger of God, sent by God to speak God’s word to them.  He said to them, “Don’t be afraid.  You are looking for Jesus of Nazareth who was crucified.  He is risen.  He is not here.  See where they laid him.”

Every time we attend Divine Service on Sunday morning we confess that Jesus rose from the dead.  This means we confess that what Jesus says is true.  He said that he would rise from the dead and he did.  He said, “Destroy this temple and in three days I will raise it up.”  He was talking about his body.  They killed his body.  On the third day he raised himself from the dead as he said he would.  Jesus said that as Jonah was in the belly of the whale for three days, so he would be in the heart of the earth for three days.  Jesus promised his own resurrection.  He rose.  This proves that he speaks the truth.  His teaching is true. 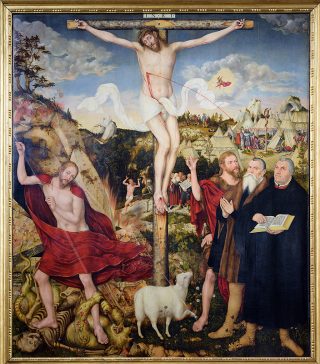 The Bible says that Jesus died for our sins.  He offered up his innocent life on the cross and there he bore the punishment, the guilt, the retribution, the anger of God against all sinners.  The Bible says he became a curse for us as the sin of all mankind was imputed to him.  He died to pay for it.  He died to take away God’s anger.  He died to reconcile us to God.

Not if Jesus stayed dead.  If the women had found Jesus’ dead body in the grave it would have meant that his offering to God was rejected.  But he rose from the dead.  The body that had borne all of your sin was alive, risen, and free from all sin.  If Jesus bore your sin, received the punishment it deserved, and succeeded in turning aside God’s anger against you and reconciling you with God, how can you know this is true?  You cannot look inside of God to see what he thinks of you or how he regards you and whether he is happy with you or angry at you, so how can you know that your sins are forgiven?  Jesus rose from the dead.  That is God absolving you.  God removed your sins from you as far as the east is from the west.  He sent all of your sin into the depths of the sea.  How do you know?  Jesus rose from the dead.  Where was the sin that took his life?  It was gone.  It was buried in Joseph’s tomb, and when Jesus walked out of that tomb, he left the sins buried.

St. Paul writes in Romans 4:25 that Jesus “was delivered up because of our offenses, and raised because of our justification.”  As surely as Jesus died for the sin of the world, so surely has God forgiven those sins!  The resurrection of Jesus is God’s absolution of the world.

Those who hold onto to their sin refuse to repent.  They won’t confess.  They don’t believe in any absolution from God.  While Christ’s resurrection is God declaring forgiveness to the whole world, those who do not believe it do not receive it and remain condemned and under the wrath of God.  It’s not that God did not absolve them.  It’s that they refused to believe it.

Before we celebrate the resurrection, we spend forty days in the season the church calls lent.  Lent is a time of repentance.  When you consider your life in the light of God’s commandments you will see that you have failed to love God above all things.  You have failed to love your neighbor as yourself.  Your sin against God doesn’t consist in mistakes, misjudgments, or inappropriate conduct.  Your sin against God is rebellion against your Creator.  It is idolatry.  You fail to love God most because you love yourself most.  That’s why you sin against God’s commandments.  And to top it off, we live in a society that elevates self-love as a virtue, despising the Christian teaching on humility and repentance.

But if you do not permit God’s law to condemn you, you cannot be saved.  I can preach absolution to you until the cows come home and it won’t penetrate a heart of stone.  Absolution?  For me?  What did I do?  Only the thirsty will drink the water, and only the hungry will eat the food.  Christ’s resurrection is God’s absolution of the whole world, but only those who hunger and thirst after righteousness will seek out this forgiveness.  This is this main reason why we go to church on Sunday morning.  It was on Sunday morning that God absolved us.  Christ rose from the dead.  God justified us.  We run to church to hear this gospel.  Our sinful hearts cannot bring us the peace that Christ alone can give.

Every time we attend Divine Service on Sunday morning, we confess that Jesus Christ rose from the dead.  This means that we confess that we shall rise in glory on the last day.  The Bible says:

But now Christ is risen from the dead, and has become the firstfruits of those who have fallen asleep. . .  But each one in his own order: Christ the firstfruits, afterward those who are Christ’s at His coming. . . For this corruptible must put on incorruption, and this mortal must put on immortality.  So when this corruptible has put on incorruption, and this mortal has put on immortality, then shall be brought to pass the saying that is written: “Death is swallowed up in victory.  O Death, where is your sting? O grave, where is your victory?” The sting of death is sin, and the strength of sin is the law.  But thanks be to God, who gives us the victory through our Lord Jesus Christ.  (1 Corinthians 15:20,23,53-57)

Those who are Christ’s are those who have been clothed with Christ in Holy Baptism and trust in him for their salvation.  They believe that he speaks the truth.  The doctrine he teaches is sound.  They believe that he is true God and true man, their God and their brother.  They believe that his resurrection is their absolution from God.  God for Christ’s sake forgives them all their sins.  And they believe that the dying bodies in which they live will be raised from the dead on the last day and be glorified.  In immortal and incorruptible bodies they will experience true joy, immersed in God’s love forever and ever.

The Divine Service here on earth does leave much to be desired.  Everything we do and say and sing is affected by our own apathy and sin.  The flesh fights against us every moment we are in church.  Sunday morning is the high point of our week, but there are weeks when we feel pretty low.  Remember, when you get discouraged in your faith and you might even feel inclined to wander away from Christ’s church and from Christ, the resurrection of Jesus is God’s promise to those who believe in him that the best is yet to come.  He is risen!  He is risen, indeed!  Hallelujah!