The Fourth Commandment concerns God’s authority on earth. Through father and mother God rules households. Through president, emperor, king, and other civil offices God rules the nations of the world. The authority of father or president is not the authority of a mere man, but is the authority of God himself. Now if a parent or civil authority commands us to do something contrary to God’s Word, then of course we say, as Peter did in Acts 5, “We must obey God rather than men.” However, such a command does not excuse us from showing honor and respect to the one in authority over us. If God wishes to remove a scoundrel from having charge of a family or a nation, that’s his business to set up and depose and he sees fit. We for our part don’t get to act like we’re no longer under authority. We may have to disobey one command because of God’s Word, but anything that’s not a sin we should gladly do. And even a bad father or ruler is worthy of respect, if not according to his person then at least according to the Fourth Commandment.

But seldom do we even need to say, “We must obey God rather than men.” When’s the last time your parents or the government commanded you to sin? More often we’re disobedient toward authority because we think the one in authority is doing a bad job and we know better than he does. Then we justify rebellion by fixating on the failure of the one in authority to do his duty, while at the same time turning a blind eye to our own duty.

This is how Absalom ended up forming a conspiracy again David, who was both his father and his king. Here’s how it began: Absalom had an older half-brother named Amnon, who was David’s firstborn son. Amnon violated Absalom’s sister Tamar, and David didn’t do anything about it. Was it not David’s duty, both as father and as king, to uphold justice and mete out punishment against the evildoer? But no consequence came against Amnon.

So Absalom took matters into his own hands and murdered Amnon. It’s astounding how often breaking the Fourth Commandment goes hand in hand with breaking the Fifth. A child is displeased with mom and dad’s sense of justice, and so takes matters into his own hands and hits a sibling. A group of disgruntled citizens rebel against the civil authorities and start a murderous uprising. Children despise their parents, and so don’t care for them physically in their old age. So it’s not surprising that Absalom quickly went from breaking the Fourth Commandment to breaking the Fifth.

Absalom fled Jerusalem to another country and was there for three years. Eventually David brought him back to Jerusalem. And two years after arriving back to Jeruslaem, Absalom appeared before his father and king. “He came to the king and bowed himself on his face to the ground before the king, and the king kissed Absalom.” A fine outward show of honor. But immediately after this comes the reading we heard tonight. Absalom does not honor his father and king. He has it out for him. He sneaks around and cleverly wins the hearts of the people, and soothes his conscience by saying, “See, all the people are discontent with my father and they like me and want me to be judge over them.” When you disobey authority don’t you like to talk about your disobedience with others and get them on your side, as if they could erase the Fourth Commandment and justify your disobedience? It’s been three thousand years since Absalom did this, and human nature hasn’t changed a bit.

You heard Absalom’s conspiracy, and how he dragged God’s name into it, pretending he had to repay a vow that he had made to the Lord, when he really just wanted to go off in full rebellion against father and government. Sin begets sin, and knocking over one commandment often knocks other commandments down with it. Absalom misused God’s name, misused the sacrifices that God had instituted in his Word, dishonored his father, murdered his brother, slandered the king’s reputation, coveted his neighbor’s house. And he would go on to commit adultery and take things that didn’t belong to him. And of course in all of this he broke the First Commandment, thinking that he would make a better god than the real one, that he could do a better job with authority and justice and distribution of kingdoms and power.

David and his servants fled for their lives, and after setting himself up in Jerusalem, Absalom went out hunting for his father. David had troops with him, Absalom had troops with him, and there was a great battle in the forest of Ephraim. Before the fighting started, David ordered the commanders of his army, Joab and Abishai and Ittai, “Deal gently for my sake with the young man Absalom.” David wanted his son to have a good life, and what parent doesn’t desire that for his child? But if David wanted his son to have a good life, he should have kept order and discipline in his family and upheld the Fourth Commandment. The Fourth Commandment says, “Honor your father and your mother, that it may go well with you.” Absalom devoted himself to breaking the Fourth Commandment, and so even though David tried to protect him, the Word of God would stand true and it could not go well for Absalom. 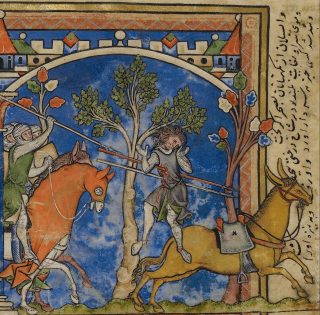 Absalom was riding through the forest on the back of a mule, and as he was passing under a great tree, his thick, luscious hair became caught in the branches. The mule went on, and Absalom was left suspended from the tree. A certain man saw him there and reported it to Joab, “Behold, I saw Absalom hanging in an oak.” “And [Joab] took three javelins in his hand and thrust them into the heart of Absalom while he was still alive in the oak. And ten young men, Joab’s armor-bearers, surrounded Absalom and struck him and killed him… And they took Absalom and threw him into a great pit in the forest and raised over him a very great heap of stones.” That was the end of Absalom. His life was cut short, he had no son, he received no proper burial, it did not go well with him. And David paid for his own negligence in upholding the Fourth Commandment in that he never got to see his son again, not even his corpse.

Does God forgive sins against the Fourth Commandment? Of course. His Son has hung on a better tree that that of Absalom, and Jesus hung there because of obedience, not disobedience. His blood covers all your sins, and he does not lie buried in stone, but has risen from the dead and exercises authority on earth through his Word. So yes, God forgives sins against the Fourth Commandment.

We should be warned, however, that sinning against the Fourth Commandment does not bring light consequences. God will uphold his authority by making examples of those who persist in disregarding it. And we should see this as a gracious thing on God’s part. If we learn to disregard the words of those whom God has put in authority over us and don’t see any harm in doing so, we will learn to disregard God’s Word as well and will suffer eternal harm for doing so. Obeying earthly authority certainly does not earn eternal life, but despising earthly authority can quickly turn into despising Christ’s authority and despising his words of eternal life. Thus we can be glad that God has set before us the example of Absalom. By warning us with such an example, the Lord is preserving our lives and teaching us to respect his authority. The fear of God opens our ears and makes us attentive. And then when the Lord speaks in his authority, he speaks all things for our good, and we learn what a fine thing his authority is, to him be honor forever. Amen.