“The Fall and Rising of Many in Israel”

And Joseph and His mother marveled at those things which were spoken of Him.  Then Simeon blessed them, and said to Mary His mother, “Behold, this Child is destined for the fall and rising of many in Israel, and for a sign which will be spoken against (yes, a sword will pierce through your own soul also), that the thoughts of many hearts may be revealed.”  Luke 2:33-35

Our text for today says that Joseph and Mary marveled at those things that were spoken of Jesus.  What things?  Immediately before our text, St. Luke records Simeon’s song.  It has been a part of the Church’s liturgy for a long time.  It goes like this:

Lord, now lettest thou thy servant depart in peace

According to thy Word

For mine eyes have seen thy salvation

Which thou hast prepared before the face of all people

A light to lighten the Gentiles

And the glory of thy people Israel. 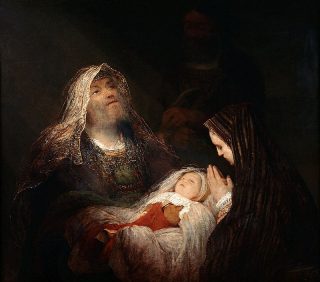 Simeon was an old man.  He was a pious Christian who was waiting for the Christ to appear.  God had revealed to him that he would not die before he had seen the promised Christ.  When Mary and Joseph brought the Baby Jesus into the temple to do for him what the law required, Simeon took the Christ Child in his arms and spoke these familiar words that have now been sung by millions of Christians over the centuries.  Joseph and Mary marveled over these words.  The entrance into this world of God in the flesh has been the source of wonder ever since it happened.

Simeon could depart in peace.  He could die in peace because he had finally seen what God promised he would see.  He saw his Savior.  He held him in his arms.  His soul found rest and peace in Jesus.  God had kept his word to that faithful old Christian.  When you are old and when your strength is leaving you and your body doesn’t work so well and your friends and loved ones are dying and life appears to be in decline – you remember that.  God keeps his word to faithful old Christians.  So don’t lose heart.  Simeon waited and waited and waited.  He patiently waited.  God said he would not die before he saw the Lord’s Christ and God kept his word.

Jesus will cause many to fall.  Now we’re talking here about the real Jesus, the Jesus that Mary bore, that Simeon held in his arms, whose life is described in the Four Gospels, who died on the cross, rose again, ascended into heaven, and whose doctrine is set forth in the New Testament by his chosen apostles.  This Jesus will cause many to fall.  There is this inoffensive crowd-pleasing Jesus marketed to religious consumers as a fine supplement to whatever spiritual self-help program they may be using.  This Jesus is a fake.  He’s a fraud.  He offends nobody.  He causes nobody to fall.

The real Jesus is the rock of offense and stone of stumbling as the prophet Isaiah called him.  St. Paul explains in Romans 9 that he causes people to stumble because they reject the righteousness that he offers them and that is received through faith alone and rely instead on their own obedience to the law to make them righteous before God.  Christ causes them to stumble because they want to work their way to heaven.  Christ won’t let them.  He tells them they need his righteousness.  His obedience and suffering is the only righteousness that will make anyone righteous before God.  Our own righteousness won’t do.  Those who stumble over Jesus try to fulfill the duties of their works-righteous religion.  As they try they trip over Jesus Christ.  Jesus cannot tolerate works-righteousness.  They fall because they are disobedient to the Word.  The Word made flesh causes them to stumble and fall.

“This Child is destined for the fall and rising of many in Israel.”  They are in Israel.  The inspired Simeon was not talking about those outside of the Church who sit off at a distance throwing stones at Christianity with a contempt born of their own ignorance.  There will be those as well.  But Simeon specifically identifies those who will fall and rise as belonging to Israel.  Israel is the Church.  Among the respected leaders of the visible Church of God on earth there will always be men who ooze religious sincerity, piety, and goodness.  They look good.  They act holy.  They are held in the highest esteem.  Even the unbelieving world admires them.

But they have stumbled over Christ and cannot get up.  They are enamored with their own feelings, sayings, and doings.  They trust in themselves.  They look for religious fulfillment in their own flesh, as if what they naturally think and feel apart from Christ can be fashioned to fit into Christ.  But Christ will be no one’s Christmas ornament.  He doesn’t adorn the life of the Christian.  He defines it.

The gospel offends.  Jesus is the sign that is spoken against.  That’s because he offends humanity at the very core of its being.  He offends us.  Yes, he does.  And we know it.  Thank God the gospel offends us!  Thank God it doesn’t flatter our flesh as do all of the counterfeit spiritual claims floating around.  Just think of the bitter end we would face if we trusted in a gospel that did not offend us.  An inoffensive gospel would give us more of the things that sooth our hurt feelings and provide comfort to our bodies.  An inoffensive gospel would make us healthier and wealthier.  It would provide us with bodily satisfaction, political peace, national greatness, and social justice.  These are the things that fallen and sinful humanity think are the greatest good.

But we know better.  Our greatest need is for redemption.  Anna the prophetess knew that!  Redemption is not political, social, or emotional deliverance.  It is freedom from the guilt of sin.  It is deliverance from the power of the evil one.  It is the forgiveness of sins that comes only by the merits and mediation of Jesus.  If forgiveness is to be treasured, one must first be a sinner who knows that he needs it.  Only those who acknowledge their sin and confess it to God as sin can rise with Christ.  Spiritual health is denied to those who will not admit their sickness.  Spiritual wealth cannot be had by those who refuse to admit their poverty.  The reason that Christ is the rock of offense and the stone of stumbling is because religious folks care more about what the crowd thinks of them than they do about what God thinks of them.  Thus they trade away eternal treasures for temporary appearances.  The crowd’s love is fickle, but those who live for the moment and ignore their eternal needs find what is passing away quite good enough.

It is the rejection of the gospel – either by blatant denial, apathetic dismissal, or deceitful falsification and distortion – that cuts like a sword through the Church’s soul.  Simeon addresses Mary, but Mary represents the whole Church.  What Mary suffered when she witnessed how the religiously well-connected and well-respected rejected her Son, the Church of all ages suffers as well.  The sword that pierces the Church’s soul is the sword of the Spirit.  It reveals a chasm between us Christians and those for whom Christ is but a decoration for a religion that excludes him.  The greatest joy is the joy that comes from God forgiving you your sins.  The greatest sorrow is in seeing that forgiveness rejected, despised, and tossed aside as if it is worthless.

The joy and sorrow of Christian faith and life go together.  There is nothing more wonderful than the forgiveness of sins.  Jesus and forgiveness cannot be separated.  Where Jesus is, there is the forgiveness of our sins.  Where Jesus is not proclaimed, there is no forgiveness, but only divine judgment against sinners for their sins.  Sickness, crime, natural disaster, poverty, death, and all troubles in life are sufficient evidence of God’s judgment against sin.  Without Jesus this judgment is God’s last word on the subject.  You can spruce it up all you want but you cannot remove the curse.  Only Christ can.

And he does.  Jesus in Simeon’s arms was proof for Simeon of the forgiveness of sins.  Jesus is God in the flesh.  God joins the human race to forgive us.  We see Jesus and we see God’s salvation.  God prepared this right out in the open where the whole world can see it.  Christ’s lowly birth, his holy life, his miracles, his teaching, his suffering, his death, and his resurrection from the dead are all historical events.  These events happened in space and time.  These events were witnessed.  Simeon held Jesus in his arms.  Mary watched Jesus die.  All of these events happened just as the Bible recounts them for our benefit.  The life of Jesus is the life of humanity.  From the manger to the cross we witness his redemption that would set the world free from sin.  It is as St. Paul put it in today’s Epistle Lesson:

But when the fullness of the time had come, God sent forth His Son, born of a woman, born under the law, to redeem those who were under the law, that we might receive the adoption as sons.

Here is our rising.  It takes us right up to heaven.  It elevates us above all of the suffering of this world.  And when the sword pierces our soul as we see unbelief, contempt, disinterest, and hostility directed against the meritorious suffering of Jesus, against his precious blood, against the virtue of his death, against the magnitude of his love, against the assurance from God himself that all our sins are forgiven for Christ’s sake, that unbelief will fill us with sorrow.  Jesus cried over Jerusalem on account of her unbelief.  The Church cries with her Lord.  Mary’s soul was pierced on account of the unbelief she witnessed.  Every Christian feels the pain of unbelief because we belong to Christ.  He is our head and we are his body.  The sword of the Spirit reveals the hearts of believers and unbelievers.

We Christians know our sin.  We admit our unworthiness.  We confess that we deserve but punishment from God.  We confess Jesus the innocent Child, Jesus the holy Man, Jesus the mighty God, Jesus the sacrifice for sin, Jesus the Redeemer of Israel, Jesus the Savior of sinners.  He raises us up to heaven even while we live in these dying bodies here on earth.  He exalts us and sets us before his Father as his dear children washed clean of all sin, holy and righteous before him.  He makes us heirs of everlasting glory.  This truth defines us as the Holy Spirit moves us to call on God as our dear and loving Father.  He enables us to endure the cut of the sword into our soul.  In fact, we consider it pure joy to be conformed to our Lord Jesus in suffering before we enter into glory.