Faith alone makes us Christians. Confession alone marks us as Christians. Only God can judge the heart. Only God can see what we really and truly believe. Nobody but God can see our faith, but the whole world can hear our confession of the faith. Christians confess their faith. The reason someone won’t confess his faith is because he has no faith to confess. St. Paul describes the relationship between believing and confessing in Romans 10:8-10,

But what does it say? “The word is near you, in your mouth and in your heart” (that is, the word of faith which we preach):  that if you confess with your mouth the Lord Jesus and believe in your heart that God has raised Him from the dead, you will be saved. For with the heart one believes unto righteousness, and with the mouth confession is made unto salvation.

Faith and confessing the faith go together. It is possible to confess insincerely and not believe a word of it. We leave the judging of faith to God. We can see only the confession of faith and we can examine it in the light of God’s Word to see if it is true or not. 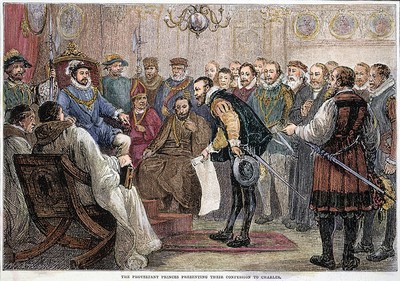 Jesus says, “Whoever confesses Me before men, him I will also confess before My Father who is in heaven.” He is not talking about confessing sins. We are not required to confess our sins before the world. We confess them to God. We confess them to those we have offended and we seek to be reconciled to them. We go to the minister of Christ, confess our sins against God and our neighbor, and receive absolution from the pastor, as from Christ himself, confident that the absolution of Christ’s minister is from Christ.

For there is nothing covered that will not be revealed, and hidden that will not be known. Whatever I tell you in the dark, speak in the light; and what you hear in the ear, preach on the housetops.

Our faith is personal. I cannot believe for you and you cannot believe for me. But the fact that faith is personal does not mean that it is private. It is not.   Faith is a public matter. Baptism is a public event, even if only a couple of people are there to witness it. The Christian faith has always been confessed publicly. It is not just the personal opinion or feeling or experience of an individual Christian. Christian confession is confessing the truth that belongs to the whole church of Christ.   The church is not a secret society, like the Masonic Lodge, where first you join and pledge loyalty and then you are initiated into its sacred mysteries. The Christian faith is an open book. When Jesus was grilled by Annas the high priest and was asked about his doctrine, he replied:

I spoke openly to the world. I always taught in synagogues and in the temple, where the Jews always meet, and in secret I have said nothing.   Why do you ask Me? Ask those who have heard Me what I said to them. Indeed they know what I said. John 18:20-21

Christians have always had creeds. A creed is a confession of faith. It is a statement of what we believe. St. Paul incorporated early Christian creeds into his Epistles. The earliest Christian creed was “Jesus is Lord.” The Apostles’ Creed developed in the early church to be used at baptisms.   We cannot but confess the faith into which we were baptized and that Christ has called on us to confess before the world.

We confess the three catholic creeds: the Apostles’ Creed, the Nicene Creed, and the Athanasian Creed. We confess as individuals and as the church. During the sixteenth century, in Germany, God sent his servant, Martin Luther, to reform the church. We do not call ourselves Lutherans out of loyalty to Luther. We were given the name Lutheran because we confess the same gospel that Luther confessed. But Luther didn’t come up with it. It is the biblical gospel that had been obscured, denied, and ignored by so many for so long. In the Lutheran Reformation, God brought the pure gospel to light. The gospel is God’s teaching. At the heart of this teaching is that a lost and condemned sinner is forgiven of all his sins and rescued from death and hell, not by his own works or merits, but by God’s grace alone, solely through faith in Christ who offered up his life to God to make satisfaction for our sins.

Here is how we confess this Christian truth in the Augsburg Confession, Article IV:

Our churches also teach that men cannot be justified before God by their own strength, merits, or works but are freely justified for Christ’s sake through faith when they believe that they are received into favor and that their sins are forgiven on account of Christ, who by his death made satisfaction for our sins. This faith God imputes for righteousness in his sight (Rom. 3-4).

Today is June 25. On June 25, 1530 the Augsburg Confession was presented to the Emperor Charles V in Augsburg, Germany. It was a time much like our own. The gospel was denied by high ranking churchmen. Those who taught the truth suffered persecution. Radical Islamic terrorists threatened the European continent.   Charles the V wanted to devote his attention to fighting against them, and the Reformation distracted him from this task. He called the meeting in Augsburg to see if matters could be resolved. Luther couldn’t attend because the Emperor had made him an outlaw for refusing to recant his faithful confession of the Christian teaching. But Philip Melanchthon, a brilliant theologian who had worked closely with Luther, was at Augsburg. He wrote the Confession that was later read to the Emperor.

The Augsburg Confession confesses the truth that the church of all ages has always confessed. It clearly proclaims the truth by which sinners are saved. It stands as a faithful, biblical, evangelical, and catholic confession of the one true Christian faith once and for all delivered to the saints. But that was so long ago. Why talk about it today? Things have changed. Surely this old document can’t address the issues that confront the church today!   But it can. It does! The Lutherans were under attack. They confessed. They confessed the truth. The Lutherans are under attack. Are we confessing? Or are we running away? The Augsburg Confession confesses the truth. Are we confessing it?

When you attend this congregation, participate in the worship, and commune at the altar, you are confessing that the teaching of this church is true. You are confessing Jesus and his pure gospel. But when Jesus says, “Whoever confesses me before men, him will I also confess before my Father who is in heaven,” he’s talking about more than going to church on Sunday. We are faced with opportunities to confess all the time. What do we say?

Or do we say nothing at all because we are afraid? Jesus said:

And do not fear those who kill the body but cannot kill the soul. But rather fear Him who is able to destroy both soul and body in hell.

What are we afraid of? Christians are murdered for being Christians in such places as Egypt and North Korea. Christians have been persecuted throughout the ages. During the Reformation, Christians were under the threat of death for confessing the truth. What do we face? A bit of discomfort?

“Confess me,” Jesus says. Do we? Or are we afraid? Do we buy into the notion that our faith is a private matter between us and God? Jesus doesn’t agree with that. He says, confess it openly! Proclaim it from the rooftops! I recall visiting with a Mormon missionary about thirty years ago in East Grand Forks, Minnesota where there is as high a concentration of Lutherans as you will find anywhere in America. When I told the missionary that the Lutheran Church was the true church because we had the true doctrine, he told me that in all of his visits to Lutherans he had never heard a Lutheran make that claim.

What a shame! Lutherans ashamed of the pure confession of the truth! We are afraid to confess. What do we do when friends or relatives come to visit for a weekend?   Do we invite them to church? Or do we use it as an excuse to skip church because some of them might be offended by our closed Communion policy? So then, we fear family and friends and not God?   The Bible teaches closed Communion.   In Acts 2:42, St. Luke describes the early church as continuing steadfast in the apostles’ teaching and fellowship, in celebrating the Lord’s Supper together, and in the prayers. From the beginning, confessing the same doctrine and joining together at the altar have been joined together. Closed communion was the universal practice of the ancient church. When you commune at an altar you are confessing the teaching of that church.

This is not new and it isn’t complicated. We are afraid of telling friends and loved ones who commune at altars that teach false doctrine that that’s what they are doing.   Why? If we told them, we would have to confess our faith. We don’t want to confess. We don’t want to take a stand. We’re afraid. We want to turn Jesus into our own little private Jesus we can hide in our pocket and leave there until it’s safe to take him out.

We have no reason to fear anyone but God.   Confess Christ and his pure gospel, and the God who determines the fate of the sparrow and the number of hairs on your head will surely take care of you. No one ever lost anything of value by confessing Christ. The gospel that tells us how Christ has rescued us from the threatening perils of our sins by bearing those sins on the cross and washing them away by his blood is the gospel that gives us to courage to confess Christ before men wherever and whenever we can. Amen