“The Catechism in Six Parts: Confession”

Tonight we come to the part of the Catechism that is probably the least known to us today, and that is Confession. The practice of Confession may be unfamiliar to you. Confession is unfamiliar to most Lutherans these days, even though it has been around for as long as the church has been around. It is a church practice that the church doesn’t practice much anymore. It is infrequently used. Tonight I want to dispel some myths and some fears about Confession, so that we’ll feel more comfortable about it and maybe put it into practice. We just read questions and answers on Confession from the Small Catechism. Now we’ll go on from there and raise some other questions as well. I’ll start with what may be your first question:

Pastor, how can you say that Confession is “unfamiliar” or “infrequently used”? Don’t we do Confession and Absolution at the start of the Divine Service?

Pastor, I thought Lutherans got rid of Private Confession. Isn’t going to the pastor for Confession just a Catholic thing?

No, it’s not. Private Confession is a Lutheran thing, too. Luther did not get rid of Private Confession. He just reformed it, cleaned it up of its abuses. There were three abuses in the medieval Roman Catholic Church that needed to be corrected. One was that Confession was forced, mandatory, done under coercion and compulsion. The second abuse was the enumeration of sins, that you had to come up with a complete listing of all your sins, in detail, or else you could not be sure that you had confessed adequately. The third, and perhaps the worst, abuse was that, instead of putting the emphasis on the absolution, God’s free gift of forgiveness, the priest would give the penitent works of satisfaction to perform, works of penance, to offset his sins. These “three oppressive things,” as Luther called them, had corrupted the practice of Confession, and had turned it from a gift into a torture. So these were the abuses that the Lutherans corrected and reformed.

But Luther never got rid of Private Confession. Far from it. He strongly encouraged people to go to Confession. He even wrote “A Brief Exhortation to Confession,” in which he says such things as the following: “If you are poor and miserable, then go to Confession and make use of its healing medicine.” Or, “So we teach what a splendid, precious, and comforting thing Confession is.” Or again, “When I urge you to go to Confession, I am doing nothing else than urging you to be a Christian.”

Likewise, our Lutheran Confessions say the same thing. From the Augsburg Confession, Article XI: “Our churches teach that private Absolution should be retained in the churches.” Or from the Smalcald Articles, Article VIII: “Confession and Absolution should by no means be abolished in the Church.” Again, this is talking about Private Confession.

But Pastor, do I have to go to Private Confession to get forgiveness?

No, you don’t. You don’t “have to.” This is not a “have to” question. This is a “get to.” You “get to” go to Confession and Absolution. It’s a gift! It’s the gospel! To be sure, God is rich in his grace, and he gives us his forgiveness in other ways as well. In Holy Baptism all your sins were washed away, and Baptism is a gift that keeps on giving. Your sins are forgiven also when the pastor preaches the gospel to you in the sermon, proclaiming the good news that Christ Jesus died on the cross for your sins, taking them away. And of course you get forgiveness in the Sacrament of the Altar, when you receive the body and blood of Christ, given and shed for you for the forgiveness of sins. No doubt.

These are all wonderful means of grace by which God delivers the forgiveness won by Christ on the cross. Holy Baptism, Holy Gospel, Holy Communion–all gifts of God, all means of grace. Each one has its own distinctive value and benefit and place in the life of the Christian. But then so does Holy Absolution. And we don’t want to set one gift of God against another. In other words, just because I get forgiveness in the sermon doesn’t mean I shouldn’t go to Communion. Just because I get forgiveness in Baptism doesn’t mean I shouldn’t go to Confession. No, God gives us all of these gifts, each one, for us to use and benefit from.

So what’s so special about Private Confession, Pastor?

For one thing, it helps us to be honest about ourselves. We readily say we are “poor miserable sinners,” but if we just keep it at that general level, we may try to excuse or rationalize sins we should be repenting of. The truth is, poor miserable sinners do poor miserable sins. And so examining our lives according to the Ten Commandments and coming to grips with our actual sins helps to keep us honest and accountable. It helps us to realize the depths of our sinfulness and our ongoing need for Christ’s forgiveness.

And that leads us to the most important benefit of Confession, and that is, the Absolution. The Absolution is the word of forgiveness. To realize that, yes, God knows my sins, how lousy of a sinner I am, and yet he forgives me–yes, me! I hear the forgiveness spoken into my ears, with my name on it! I feel the pastor’s hands on my head, Christ’s authorized representative loosing me from the burden of my sin and my guilt! That is what is so distinctive and refreshing about Individual Confession and Absolution: precisely that it is individual, dealing with my sins and directing God’s cleansing and forgiveness and care to me.

Luther puts it this way in his Brief Exhortation: “So any heart that feels its sinfulness and desires consolation has here a sure refuge when he hears God’s Word and makes the discovery that God through a human being looses and absolves him from his sins.” “[It] is a work that God does when he declares me free of my sin through His Word placed in the mouth of a man. It is this splendid, noble thing that makes Confession so lovely, so comforting.” Yes, the great treasure in Private Confession is the Absolution, spoken to you in particular.

But Pastor, I’ve never gone to Private Confession. I’m scared. How can you reassure me?

Let me guess what’s scary or intimidating about it. Maybe you think you have to come up with some huge, awful sin–like robbing a bank or murdering someone–in order to go to Private Confession. No, ordinary, garden-variety sins are welcome any time. Maybe you can think of one or two that weigh on your mind. Lustful thoughts, harsh words, not treating your husband or wife with the love and care you know you should–that sort of thing. But even if you can’t come up with any sins in particular, or you’re not quite ready to speak about them, then just make a more general confession and the pastor will still speak God’s word of forgiveness to you.

But Pastor, if I told you my sins, my dirty awful sins, wouldn’t you think less of me? Wouldn’t it change our dynamic, our relationship, and you wouldn’t be my friend anymore? No, I wouldn’t think less of you. If anything, I might be tempted to think more of you, that you took advantage of the opportunity to come to Confession. But then, don’t go and get a big head about it and say, “Hey, look at me! I went to Confession!” That would be pride, and then you’d have to come back to Confession for that!

No, nothing you say would shock me. I believe what the Bible says about our sinful nature, how the old Adam keeps on having evil desires and thoughts. And hey, your pastor knows what a sinner he is! So I won’t be shocked by your sins. In fact, I’m here to give you God’s forgiveness for them. 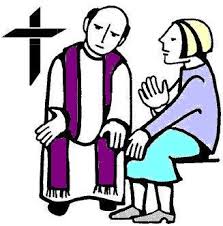 And what’s more, Private Confession is just that: Private. The sins you confess go nowhere else. I am under oath, solemn oath, never to divulge the sins confessed to me. I never have, and I never will. I don’t even divulge them to myself, in a sense. What I mean is, when you confess your sins to me, my ears become a graveyard. The sins die there. I don’t carry them around with me in my head and hold them against you. I can still be your friend. But the more important thing for you is that I be your pastor. God has assigned me here to take care of your soul. And that includes hearing the sins you confess, the sins that trouble your soul, and then forgiving them in the name of Christ.

So like I say, Pastor, I’ve never done Private Confession before. What would it look like? How would I go about it?

For that, let’s turn in the Lutheran Service Book to page 292, where there’s a form we can use for “Individual Confession and Absolution”. . . .

Pastor, when can I go to Private Confession?

Pastor, tell me once again: Why should I go to Confession?

For the gospel. For the forgiveness of your sins. To receive the gift that Jesus has for you: Holy Absolution, with your name on it!

If my sins should cause me grief,
When my conscience seeks relief,
To my pastor I can go
And confess the sins I know;
He will lay hands on my head
And forgive in Jesus’ stead.
Absolution, full and free!
God’s forgiveness–yes, for me!