“Arise, shine, for your light has come, and the glory of the LORD has risen upon you.”

And that’s unfortunate. Because having church on Epiphany used to be more common than it is today. Many churches have dropped having Epiphany services on Epiphany, which is always January 6, regardless of the day of the week. Instead, these churches transfer Epiphany to the Sunday before or the Sunday after, or they even ignore it altogether. If they transfer it to a Sunday, then whatever was on that Sunday gets bumped from the church year. And if they ignore Epiphany altogether, then they’re ignoring a major festival in the church year, one that has been celebrated in the Christian church for many, many centuries–in fact, one of the earliest festivals to be observed. And that’s a shame. Because the themes of the Epiphany festival are so important and so joy-giving. And they’re summed up in that opening verse from Isaiah 60: “Arise, Shine, for Your Light Has Come.”

Why is it so important that our light has come? Because otherwise we would be sitting in the dark. Isaiah says so: “For behold, darkness shall cover the earth, and thick darkness the peoples.” This is talking about spiritual darkness, not about the fact that that we have limited daylight at this time of year. Spiritual darkness–being in the dark about God and about ourselves and what life is really all about. That is the natural condition of mankind since sin entered the world. We’re all just groping around in the dark, not knowing where we came from or where we’re going or which is the right path to take. Even if we know the right way to go, we keep wandering off the path and getting lost. That describes the spiritual darkness that shrouds sinful mankind.

Look at how lost and clueless so many people are. Millions of people around the world. The Muslims, with their false God called Allah. Post-Christian Europe, which has become completely secularized and is suffering the consequences. Mormons, bamboozled by the false teachings of Joseph Smith. The people who follow false teachers like Joel Osteen and Joyce Meyer. Atheists and agnostics and post-modernists, who have no interest in what they disparagingly call “organized religion.” They all have lost their way. They all are fumbling around in the dark. So much spiritual darkness to go around.

But they are not the only ones. Before we got so proud and haughty, let’s take a look at our own darkness. Israel of old was suffering the consequences of their own dalliance with darkness. They thought they knew better than what the prophets were preaching. They became like all the other nations around them, thinking they could go it on their own, without listening to God’s word. As a result, they were driven out of the land and taken into exile. The depressing darkness of the Babylonian Captivity fell upon the people, and they suffered from their own foolishness.

We do that, too, don’t we? Even as God’s people, the church, we fall into the old ways, into the ways of the world. We tune out God’s word, warning us against wrong turns and dead ends. We listen to the siren song of the world, luring us to steer in that direction, and we end up crashing on the rocks. We indulge our flesh and our desires, even when we know it’s wrong. That’s dancing in the dark. That’s stepping out of the light and turning back to where we should not go. And we all do it. 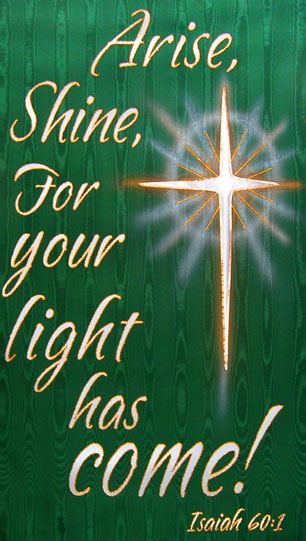 We need to be called back to the light. And that’s what Isaiah is doing for us. His message reminds us of who we are and who it is that came for us: “Arise, shine, for your light has come, and the glory of the LORD has risen upon you. For behold, darkness shall cover the earth, and thick darkness the peoples; but the LORD will arise upon you, and his glory will be seen upon you.”

Isaiah here is telling us that we have been called out of darkness and into the Lord’s marvelous light. We have been set apart, to belong to the Lord, to live as his people. We have an identity and a purpose in life. Do you know that? Do you see yourself, do we see ourselves, in that way? That we have a special calling, that we do not belong in the dark anymore.

How did this happen? Because of what the Lord has done. He sent his light to shine upon us. He is the light who dwells among us. Jesus Christ is the light of the world. A star led the Wise Men to where the child was, and they were overjoyed when they saw his face. Christ is shining out with the light of life, even on this dark night in January.

In Christ, we see God for who he is for us. We see a gracious God in the face of Christ. Otherwise, we would not know God as he wants to be known. We would be lost, knowing that there must be a god or gods up there somewhere, and we would feel a sense of guilt and separation and even hatred or resentment toward God. But we wouldn’t know how to fix it. And we couldn’t, anyway.

So God comes and does the job for us. He sends his only-begotten Son, in our flesh, the little baby named Jesus. “Where is he who is born king of the Jews?” In a humble town, in a family of humble means, not where you would expect a king to be found. But there he is. Like he will be later, in another place you would not expect a king to be found–hanging on a cross, dying. And darkness covered the land as he died. Jesus will die for the sins of the world. The darkness falls on him, not us. But that light, his light: “The light shines in the darkness, and the darkness has not overcome it.” Christ rises from the dead, and now he shines out with the light of life. New life and everlasting life, righteousness and resurrection, are yours in Christ. The little child in the little town, humble and not what you would expect, yet he is the light of the world. And God directs some foreigners, some outsiders, to make a long trek to find him. For this Jesus is not just the king of the Jews. He is the king of all peoples, of all nations. He’s the king of the Gentiles, too. And God wants everybody to know it.

Isaiah saw this coming, the nations coming to meet the Messiah: “And nations shall come to your light, and kings to the brightness of your rising. Lift up your eyes all around, and see; they all gather together, they come to you. . . . A multitude of camels shall cover you, the young camels of Midian and Ephah; all those from Sheba shall come. They shall bring gold and frankincense, and shall bring good news, the praises of the LORD.”

This is a happy day! Epiphany is a joyous occasion. What a joy it is to know you have a Savior, when you’ve been sitting in darkness. This changes everything. Praise the Lord, I saw the light! And so did you. You’ve been enlightened by the Holy Spirit, given you in your baptism. The Spirit will lead you in the light, and back to the light, whenever you drift off the path. He does this by God’s word, which you need. A regular diet of Word and Sacrament–that’s what you need to stay healthy this year. The Feast of the Epiphany is a good start.

And so now this is your time to shine. You and I–we Christians shine like stars in a world of thick darkness. “Let your light so shine among men that they see your good deeds and give glory to your Father in heaven.” Let people see Jesus in you and through you. With your deeds and your words. Are there people you know–friends, relatives, associates, neighbors–are there people in your circle of relationships for whom you could be a star leading them to Jesus? Leading them here, to the church, where Jesus is? Ask God to help you let your light shine. Not that you manipulate people. But that you manifest Jesus. So that you love and serve your neighbor with the love that flows through you as a Christian.

That, dear friends–that is how you “arise and shine,” even in a cold and dark January. “Arise, shine, for your light has come, and the glory of the LORD has risen upon you. For behold, darkness shall cover the earth, and thick darkness the peoples; but the LORD will arise upon you, and his glory will be seen upon you.” Happy Epiphany.