“The one who humbles himself will be exalted.” Now I don’t know if our Lord was talking about my Chicago Cubs there or not, but finally my humble Cubbies have been exalted. Well, actually, I do know: Jesus was not talking about the Cubs, because he said, “the one who humbles himself.” And it wasn’t that the Cubs were humbling themselves all those years, it was all the other teams humbling them. So maybe the Cubs being exalted now is just a matter of them having a whole bunch of good players. So no spiritual lesson to be learned there.

But there is a spiritual lesson to be learned in the words of Jesus today. It has to do with how we position ourselves before God. Listen again to Jesus’ words: “For everyone who exalts himself will be humbled, but the one who humbles himself will be exalted.” You see, now doesn’t that sound upside-down? But it’s true. And we see this principle at work in the story that Jesus tells, the parable of “The Pharisee and the Tax Collector.”

The reason Jesus tells this parable is because his hearers needed to hear it. They are described as those “who trusted in themselves that they were righteous, and treated others with contempt.” It’s this self-righteousness and the looking down on others that Jesus will rebuke.

So Jesus begins this story. “Two men went up into the temple to pray, one a Pharisee and the other a tax collector.” Now right off the bat you would expect the Pharisee to be the good guy and the tax collector to be the bad guy. The Pharisees were widely regarded as the most moral, the most righteous, the most religious people in the community. In contrast, the tax collectors were looked down upon as generally being corrupt, crooked, and disloyal to the nation. Not much admirable about them. But there would be admirable things to say about the Pharisees.

And this Pharisee did not need much prodding to say those admirable things about himself. Even to God. The Pharisee is standing by himself there at the temple, and he prays like this: “God, I thank you that I am not like other men, extortioners, unjust, adulterers, or even like this tax collector. I fast twice a week; I give tithes of all that I get.” So this Pharisee is someone his culture would look at and they would praise him. They would look up to him. He was not a blatant, obvious sinner that everybody could identify and look down upon. He was not, for example, an extortioner or an adulterer.

So the Pharisee in the story was clearly not an outwardly manifest sinner. You would think he was a pretty pious fellow. And the Pharisee would have you know that he was. “I fast twice a week; I give tithes of all that I get.” Well, that’s pretty impressive. To fast, not just once or twice a year, but to fast twice a week–wow, what religious self-discipline! To give a tithe, to give ten percent of everything you have as an offering to God–such sacrificial giving! Why, this Pharisee would be at the top of the list of pious people to be praised and emulated.

But Jesus turns all that upside down. Because this Pharisee was trusting in these works of his to make himself righteous before God. He didn’t think of himself as a sinner. He thought he was superior to all those sinners who were not as good and righteous as he was. But in Jesus’ estimation, that is not praiseworthy. No, indeed, it is deadly. The Pharisee’s pride is what stands out in the way Jesus describes him. And it sets him in contrast to the next guy Jesus tells us about, namely, the tax collector. 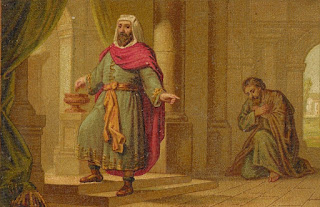 The Pharisee stood by himself at the temple, because he was so outstanding and superior to everyone else. The tax collector, by way of contrast, stood afar off, because he sensed his unworthiness to come before God. Out of shame, he would not even lift up his eyes to heaven. Rather than patting himself on the back, this man was beating his breast in contrition. Rather than listing a litany of why God should be pleased with him, the tax collector simply says, “God, be merciful to me, a sinner!”

The tax collector recognizes his guilt before God. He confesses it. He knows he is a sinner. He’s not delighting in his sins; instead, he is sorrowing over them. And the only thing he can think of to say is not to make any excuses, but simply to turn to God and seek his mercy. “God, be merciful to me, a sinner.”

“Be merciful to me,” the tax collector prays. The Greek word that’s used here is from the same root that’s used in Romans 3, where it says what God has done in order to be merciful to you. It says there that God put forward Christ Jesus as a “propitiation” by his blood. A propitiation? What’s that? And what does that have to do with God being merciful to sinners?

A propitiation is an atoning sacrifice. It is a sacrifice that makes atonement for sins, covers them, so that they are not counted against you. And that happened at the temple on the Day of Atonement, when the high priest would enter the Holy of Holies and sprinkle the blood of the prescribed sacrifice on the Ark of the Covenant. He sprinkled it on the lid, the cover, which was called the mercy seat. And that sacrifice, Romans 3 says, was pointing ahead to the propitiation, the atoning sacrifice, Christ would make by shedding his blood on the cross.

So there’s the connection. When the tax collector prays that God would be merciful to him, the basis for that mercy is that Christ would “mercy-seat” him by making the atoning sacrifice for his sins. And your sins also, dear Christian! You can pray to God to be merciful to you, because Jesus “mercy-seated” you by his blood on the cross. Your sins are atoned for, fully forgiven, because of what Jesus did for you. He is your righteousness. Plead that before God and not your own goodness. Don’t be afraid to be a sinner. Don’t excuse your sins; confess them. Recognize yourself as a sinner in need of God’s mercy. And by his mercy you too will go to your house justified. To be justified is to be declared righteous by God, not guilty before him, because your punishment has already been served by Christ and his righteousness is credited to your account.

“God, be merciful to me, a sinner.” You know, not everybody is ready to pray that prayer. Not everyone is willing to admit that they are a sinner. For example, there is a false teacher out there by the name of Joyce Meyer. Maybe you’ve heard of her. Did you know Joyce Meyer used to be a member of an LCMS church in St. Louis? But she no longer likes what our church teaches. You see, Joyce doesn’t think she’s that much of a sinner. She has said of her time in the Missouri Synod: “All I was ever taught to say was ‘I, a poor, miserable sinner.’ I am not poor, I am not miserable and I am not a sinner. That is a lie from the pit of hell.” Well, no, sorry, Joyce, you are the one spouting a lie. If you cannot confess that you are a poor miserable sinner, then you are deceiving yourself–and deceiving others. For the Bible says, in 1 John 1, “If we say we have no sin, we deceive ourselves, and the truth is not in us.” The truth is not in you, Joyce Meyer.

But there is a truth we can rely on, and it is this: “If we confess our sins, God, who is faithful and just, will forgive our sins and cleanse us from all unrighteousness.” Why? Because the blood of Jesus, God’s Son, cleanses us from all sin. God has “mercy-seated” us in Christ.

“God, be merciful to me, a sinner.” That was the tax collector’s prayer. And it is my prayer and your prayer too. And because God has been merciful to you, by sending Christ to be the atoning sacrifice for your sins, this is how you will go down to your house today justified, declared righteous, not with a righteousness of your own, but with the perfect righteousness of Christ. “For everyone who exalts himself will be humbled, but the one who humbles himself will be exalted.”