I’ve read them all – from Kennedy to Kane to Van Rheenen to Jenkins. I refer to and use none of them.

In the end, as a congregation, we are traveling a path rarely recommended by the aforementioned volumes. And this path, which is essentially a confluence of three important streams of thought and action, in my estimation, has proven to be steady and sure.

The first stream is the most important. It is both the instrument of calibration and the point of origin; the unchanging truth which establishes the course. Unfortunately, it is also the one component that many of the evangelism volumes and popular trends are most likely to disregard, and because of this, the paths they end up recommending become pretty much useless for a guy like me.

The first stream works from the elementary premise that it is preeminent to know and understand what Christ Himself says about how Christians are made. He declares that His Christians are made by baptizing and teaching, that is, Word and Sacrament (Matthew 28:19). This first stream carries along to an equally fine knowledge which the Apostle John clarifies for us in 1 John 5:6-12. He tells us there that this same Lord Jesus Christ makes His presence among His believers and strengthens them in the faith through the means of Baptism, the Lord’s Supper, and the Word of the Gospel pronounced in Absolution, read, preached, and taught. From there, the first stream washes along to another gem of truth which shows that Jesus, the Light of the World (John 8:12), has said that by His Gospel given through Word and Sacrament, Christians become lights in the world around them (Matthew 5:16). And finally, this first stream makes its way through the Book of Acts and into what is for us now 2,000 years of Christian history proving that the church does not grow because of specialized programs or gimmicks. Such things have never proven sturdy for introducing people to Jesus. By way of the Gospel, the Lord’s Christians have themselves been re-created to be the means for drawing others to that which instills and sustains faith. The Lord sends His Gospel invitation into all nations through the Christians, His church.

The second and third streams are very closely related. They emerge from the shared wellspring of “identity.”

In particular, I explain the second – the theology of worship – rather thoroughly on our church’s website. It’s a wordy piece, but it needs to be, and it has proven to be helpful to those who have either come to us by way of personal invitation or referral, one of our communications to the community, or by simply stumbling upon us as they were seeking a worship home that wasn’t mushy. In it, I take the time to explain the differences between the language of the world and the language of the church. I work to present that the Word of God is powerfully relevant in and of itself. I spend considerable time affirming the identity of our parish as one that is well-secured in the theology presented. Feel free to click here to visit the site to read the fuller rendition. In the meantime, I’ll share a pertinent portion of what I’ve provided there as it deals with a fundamental within our understanding of worship – that it is not a tool of “evangelism,” at least not in the popular sense of the word. And by the way, I would encourage anyone trolling this article to maybe take some time and read the full write-up on our website so that you are not too terribly tempted to offer negative commentary about anything in the following without having the appropriate context. Remember, this is a snippet of a fuller explanation. It is provided as somewhat of a summary of a singular point within what is a much fuller discussion on the topic of worship.

“To clarify, ‘evangelism’ is the actual ‘reaching out’ from the believer to the unbeliever with the Good News of Jesus Christ. Evangelism is what believers leave a worship service strengthened to do, and it happens in various ways. As has been said, worship, on the other hand, has another precise purpose. Yes, evangelism does happen in a worship service. It has to. The service has the Word of God which is the power to convict and convert the unbelieving heart, but principally, worship is not evangelism. Worship is about God meeting with those who are already His and giving them what they need for faith and life in this world and the world to come. Catechesis is the critical tool in the hand of worship. Catechesis, in its formal efforts, is the delivering of this Good News with the substantive teaching of the Gospel’s contents which should also have as a goal the recognition of worship for what it truly is – namely the time and place where a believer is gathered into the fullest earthly measure of the new society with the rest of the citizens of God’s kingdom to receive the gifts of forgiveness of sins, life, and salvation that He gives, and from there, to go forward as pilgrims into the foreign lands of this world and speak the powerful language of faith to others.”

Just as it is important to understand how Christ makes Christians, so also is it crucial for a church to understand what worship actually is as it relates to her evangelism efforts. Enough said there.

The third stream is pretty simple. It is to behold the previous streams and to see them converge into a straight-forward communication of the church’s identity to the surrounding community. It is choosing to use the church sign out by the road for messages like these… 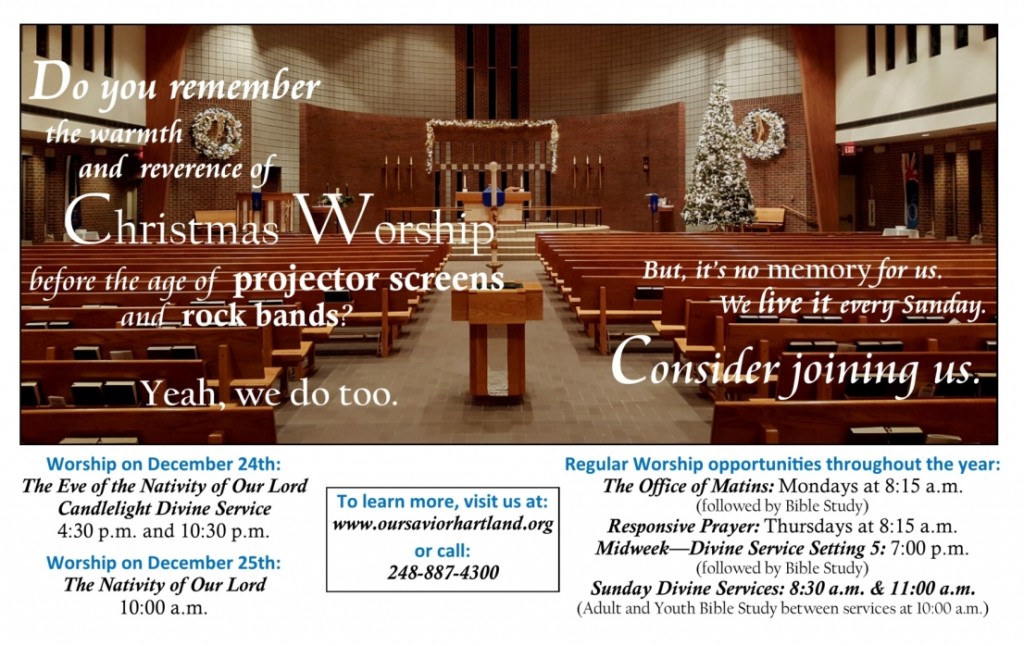 It is taking the opportunity to use the few short minutes you’ve managed to acquire on the radio airwaves not to sell your church as hip while at the same time fractionally hinting to a spiritual dimension as reason for its existence – like this radio commercial – but rather communicating a substantive identity, highlighting important distinctions, and most importantly (since it is an opportunity to be heard), speaking as clearly as possible the Word of God’s Law to reveal sin and His Gospel to bring about repentance and faith – like this radio commercial.

That’s it. That’s our evangelism program (if you want to call it that) in a nutshell.

Now, from an individual communicant member perspective, the first stream pointed out that the grandest part of the effort happens between people, and so I would emphasize that a pastor’s work of teaching is never done. We are always to be preaching and teaching, leading the people God has placed into our care into good grazing lands. This means being sure to catechize and encourage each Christian precisely for speaking to neighbors and family as the Spirit moves and provides.

From an organization perspective, we don’t spend a lot of money on the efforts that I described above. But I can tell you that in a day and age of popular but shallow theologies and spiritual starvation, every time we present a church sign like the ones above, we receive visitors. Every time we do a mailing like the ones above, we receive visitors. Not tons, but that’s not the point. The Holy Spirit deals with the numbers. Coincidentally, I can tell you that when this type of messaging is happening, we receive a good number more visitors than before we embraced the third-stream heading. And by the way, what’s interesting to me is that many of the visitors seem to be staying long enough to be catechized. Not all choose to make Our Savior their home, but in my opinion, the ones who do and the ones who don’t are both showing a commitment to taking that first step. I believe that this happens because while the world around them is doing anything and everything to sell itself – as are so many of the other churches they are encountering before they discover us – we are not. We are simply doing our best to remain true to Christ’s mandate, laying ourselves and our intentions bare, avoiding all temptation to waver in our Lutheran identity, and working to communicate all of this as clearly as possible and as genuinely as possible. Compared to most other churches around us, this alone makes us quite unique, and it sure seems as though it is resulting in folks having few if any misconceptions about us, which means they have a pretty good idea as to who we are and what we’re all about before they ever make the deliberate attempt to walk through the front doors. That is an incredibly organic beginning, one that is in many ways similar to what happens on the individual level between two friends. There’s no gimmick. There’s nothing shaky or artificial. It’s a solid beginning with promise.

To conclude, when it comes to stream three, I won’t say you must do what we are doing because certainly it is true that community contexts vary enough that our particular messaging may not necessarily be suitable. Although, I would say that the spirit of stream three has proven to be a good one, and whether or not it produces visitors, the message is both challenging and desperately needed. As far as streams one and two, I will argue fervently that these are non-negotiable. Rest assured that if you doubt Christ’s ways for making Christians and reach for something else, if you see holy worship as an evangelism tool that is to be reconstructed in order to meet the communities perceived wants, you will have charted the wrong course.