How does a Christian deal with claims like this?

The tactic used in this meme is intimidation. There is no way most readers could research all these claims. The implication is that the maker of the meme must have done the research. Therefore it must be true. After all, how can I possibly argue. This is the use of the Snow Job fallacy [http://utminers.utep.edu/omwilliamson/ENGL1311/fallacies.htm]

Contrary to the closing claim: “Most scholars” do not actually make such a claim as this meme pretends. Nor were early church leaders wanting “to seize the enthusiasm from crowds already gathering on” that day. For basic background on when the Church began using Dec 25th and why read here. [https://steadfastlutherans.org/2013/12/redeeming-holy-days-from-pagan-lies-christmas-2/]

I would encourage readers to spend some time actually reading these myths to discover that none of the claims are true. That has great value in refuting these arguments in the future. But don’t read the folklorist stuff. Read the old myths in translation from the ancient languages. What you will find is that the people who put out memes like this do not have any legitimate claim. They are just passing along a group of lies.

And there is another valuable way of showing the claims that these pagan gods cannot possibly have been born on December 25th. December 25th did not exist as a month or a day in any of the calendars of any of the cultures in the list. December is an exclusively Roman cultural month name.

For Those Who Want Some More Detail

Some might object, “Don’t be silly, we mean the equivalent date on their calendar!” Really?!! The meme has the audacity to make a specific historical claim that it was December and it was the 25th of that month. It is precisely this particular date that the meme claims is a demonstration of the falseness of Christianity. Which way do they want it?

No Equivalence to December 25th in Other Ancient Calendars

Horus, Osiris, Zoroaster, Mithra: these are Egyptian and Persian. The Egyptian and Persian cultures had a fixed number of days in their calendars. This means that the calendar year would cycle through 1/4th a day every year so that at last, after 1,460 years, the solar year and the calender would match up for one day. The the whole cycle [called a Sothic cycle] would start all over again. They had no month “December” nor did they count their days within their months the same way as the Romans. To claim that any of these false gods were born December 25th and that Jesus is an imitation is a lie. And those claims are worthy of ridicule based on both the history of calendars as well as the reading of the ancient myths.

Attis, Heracles, Dionysus, Adonis, Hermes, Prometheus, Krishna: The Phrygian/Greek/Indian gods. The Indian and Greek calendars present another set of problems. Which calendar does one use? Ancient India and ancient Greece had no standard calendar. Each region or city-state established their own calendar. Each had their own set of religious holy days. Both the calendars and the holy days differed from place to place. The start of the year was different from one city to the next. The counting of the months, when months or days would be intercalated was different (leap days and months). The names of the months were different from city to city. Even the way the new month would be declared and published was different. The method of counting days within a month and the reasons for them varied. There is no simple equivalent that can be made to “December” or to the 25th in these calendars.

For Those Who Want A Lot of Detail:

No Equivalence in the Old Roman Republic Calendar

As a month, December did not come to be fixed around the winter solstice until the Julian reforms of 46 B.C. Before that the Roman Calendar was a much more loose lunar/solar calendar and had possibly been as much as half a year out of synchronization with the solar year.

59 1 The adjustment of the calendar, however, and the correction of the irregularity in the computation of time, were not only studied scientifically by him, but also brought to completion, and proved to be of the highest utility. 2 For not only in very ancient times was the relation of the lunar to the solar year in great confusion among the Romans, so that the sacrificial feasts and festivals, diverging gradually, at last fell in opposite seasons of the year, but also at this time people generally had no way of computing the actual solar year; the priests alone knew the proper time, and would suddenly and to everybody’s surprise insert the intercalary month called Mercedonius. [Caesar 59.1-3, http://penelope.uchicago.edu/Thayer/E/Roman/Texts/Plutarch/Lives/Caesar*.html]

But since that number [of days in Romulus’ year] matched neither the revolution of the sun nor the phases of the moon, it sometimes happened that the cold season fell out in the summer months and, conversely, the hot season in the winter months: when that happened, they let pass as many days—assigned to no particular month—as were needed to bring them to the time of year when the conditions of the heavens matched the month they were in. [Kaster, p. 155]

These documents are just two clear examples of many. They demonstrate there is no foundation for those who would promote the meme at the top of the article and claim that what they mean is that December 25th means the winter solstice.

The last year of the old Republican calendar was called the “Year of Confusion” [https://en.wikipedia.org/wiki/46_BC]. Emperor Julius made that year last 445 days in order to bring his new calendar plan into operation. It is only after the Julian reforms that one can start to talk about a consistent month and day of the year.

The only example of a pre-Julian Roman Repubican calendar that has come down to us is the fragmented Fasti Antiates maiores. 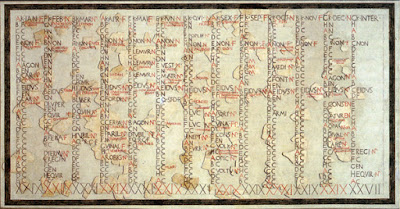 This calendar was found in Antium (modern Anzio), Italy, in the year 1915. It is broken, but largely readable.

The thirteen month names head the columns: JAN, FEB, MAR, APR, MAI, IVN, QUIN, SEX, SEPT, OCT, NOV, DEC, INT. January through June (IVN) are the same month names we use. Then come Quintus and Sextus. Quintus was renamed Julius in his honor when he reformed the calendar in 46 B.C. Sextus was renamed Augustus in his honor after he fixed a leap year problem that was introduced with the Julian reforms. September through December carried through. INT stands for the Intercalation month that was to be used to keep the months in the appropriate season when those in charge of the calendar determined it necessary to do so.

On the right is a close-up of the November/December columns (based on Degrassi and Michels). What you will notice is that in each month there is no ordinal reckoning or numbering of days from 1 to the last numbered day. There is no “25th” of the month at all.

What this particular calendar shows us is that days were lettered A to H, then A to H. This is called a nundinal (“nine-day”). It was a cycle that would start over again on the ninth day. This means it was an eight day long cycle that the Romans used for their business and worship. It corresponds to the 7 day work week but is one day longer. And anyone using a 7 day week would need to take this into account. Sunday worship for Christians, Sabbath for Jews would be on a different letter of the nundinal in each nundinal cycle. Those using Greek calendars would have the same problem. The Greeks generally began their seven day week on Saturn’s day. Because the Greek and Mosaic weeks both had seven days they overlapped consistently. Thus, Sabbath, or the Seventh Day in the Mosaic order would always have happened on the same day of the week in the Greek method. So, generalizing a bit, Saturn’s day, or Saturday, aligned with the Sabbath.

The next column after the nundinal markings tells whether the day is according to Roman law a: F-Fastus=’lawcourt day’; C-Comitialis=’assembly day’ or ‘N-Nefastus=’non court day.

There are three special divisions of the month marked on the columns. The first day of the month is at the top, heading the column. Next to the nundial letter is the letter K. This stands for kalendae ‘kalends.’ The word probably meant that this day would be “called out” as the new month. We can just use it as a reference to the first day of the new month. But in the time before the Julian reforms, this day was most likely announced by a priestly leader (pontif) and established based both on seasonal and lunar considerations.

The fifth day of November and December (along with January, February, April, June, August, and September) are marked NON. For March, May, July and October the seventh day of the month is marked NON. NON is short for Nonae=ninth. That is, it marks the ninth day before the Ides.

Eight days later is the Ides, marked EIDVS on the calendar. Probably this was meant to indicate the full moon. The Republican calendar puts the Ides of a particular month either on what we would number as the 13th or the 15th of the month. But that is not how the Romans counted the days.

How the Roman Republic and the Julian Reform Counted Days

The Romans would name their days by an inclusive count of how many days the date happened before the Nons, Ides, or Kalends. Thus, for example, Hippolytus wrote in between 202-211 AD.

We can note that Hippolytus (who wrote over a century before Constantine’s Council of Nicea) was using the Julian calendar and stated that Christ’s nativity was eight days before the kalends of January. This, as a calendar day name, is equivalent to the Gregorian date name of December 25th.

This equivalency works because the Julian Calendar gave December 31 days. But if you look at the Republican Calendar you can see that December was given XXXIX or 29 days. Thus eight days before the kalends of January would be comparable to the Gregorian naming convention of December 23rd. But it would not be the correct date on the Gregorian Calendar. For most named dates in the literature of the Roman Republic before the Julian reforms there is very little chance of determining a Gregorian equivalence unless there is some other event dated in a different way—such as astronomical events.

What we can say is that well before Constantine there were Church leaders using the Julian calender who pointed commemorated the birth of Christ on the 8th day before the Kalends of January. A date we would legitimately equate with December 25th in our current system.

When someone presents an argument like the meme above which claims all sorts of ancient pagan gods actually had claim to a birthday on December 25th there is no need to panic. They are attempting to undermine faith in Christ by this attack. But the attack has no merit. The information is dishonest. The various ancient mythologies of these false gods do not support the claim. And, as we have seen above, the use of the Julian/Gregorian calendar date of December 25th is a flat out impossibility when we look at what is known from actual historical documentation.

For other articles dealing with specific challenges to Christmas and holy days associated with the date of Christmas:

Some Pagan days claimed as sources for the Christmas cycle

For some general introduction: