2nd-Last Sunday of the Church Year
Trinity 26
And the text for the Feast of St. Martin, Pastor- November 11 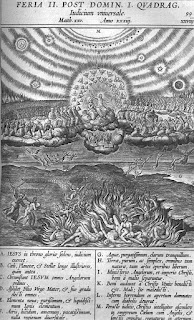 31 “When the Son of Man comes in His glory, and all the holy angels with Him, then He will sit on the throne of His glory. 32 All the nations will be gathered before Him, and He will separate them one from another, as a shepherd divides his sheep from the goats. 33 And He will set the sheep on His right hand, but the goats on the left. 34 Then the King will say to those on His right hand, ‘Come, you blessed of My Father, inherit the kingdom prepared for you from the foundation of the world: 35 for I was hungry and you gave Me food; I was thirsty and you gave Me drink; I was a stranger and you took Me in; 36 I was naked and you clothed Me; I was sick and you visited Me; I was in prison and you came to Me.’

44 “Then they also will answer Him, saying, ‘Lord, when did we see You hungry or thirsty or a stranger or naked or sick or in prison, and did not minister to You?’ 45 Then He will answer them, saying, ‘Assuredly, I say to you, inasmuch as you did not do it to one of the least of these, you did not do it to Me.’ 46 And these will go away into everlasting punishment, but the righteous into eternal life.”

31 When the Son of man shall come in his glory, and all the holy angels with him, then shall he sit upon the throne of his glory: 32 And before him shall be gathered all nations: and he shall separate them one from another, as a shepherd divideth his sheep from the goats: 33 And he shall set the sheep on his right hand, but the goats on the left.

When the Son of man shall come. The aspect of such glory and majesty will immediately bring the greatest terror and pain to the damned. 2 Thess. 1:9. It is, indeed, painful to the Christians, that they must remain in the midst of the untoward, perverted, bad people of the world, which is the devil’s kingdom (Matt. 12:10) but here, as in all their sufferings on earth, they have the consolation of the future day of judgment, when Christ shall make such a division.

Those on his right hand, etc. It sounds strange that he makes the judgment entirely dependent on these works alone, and gives them as the ground and reason of it. These are called the works of mercy, or on the other hand the unmerciful works, which (to speak in a subtle manner) are the works only of the fifth commandment. But what of the works of the other commandments? Why does he so highly exalt these commandments which are also approved by Turks and heathen?

Answer: 1. It sounds as if he would teach hereby that many among the Christians, after having received the preaching of the Gospel of the forgiveness of sins and of grace through Christ, afterwards became worse than the heathen. Matt. 19:30.

2. He wishes to remind us, who are redeemed from the condemnation of the fifth commandment and eternal death, and have a gracious God, who bestows on us all goodness for time and eternity, that we should also look upon this goodness shown to us as an example.

When saw we thee an hungred? etc. With these words he does not say that those who are not Christians merit eternal life by such works, but he speaks of the works of believing Christians. For there is no doubt of this, that whoever will do such works of mercy to Christians, must himself also be a believing Christian; but whoever does not believe on Christ, will certainly not have such an affec tion for Christians, and much less for Christ; that for his sake he should show mercy to the poor; there fore he will also pass sentence on both parties accordingly, whether they have done those works or have not done them, as an open evidence of the fruits of their faith or their unbelief? Behold, here already in this world the distinction is made between the sheep and the goats, that each may very well perceive it in himself, and this must also be seen outwardly.

Then shall the righteous answer him, etc. But how does this come, that the “righteous” do not know that they have done this to Christ, as they say, “Lord, when saw we thee an hungred?” etc. Evidently, because they do not regard what one gives, perhaps to a poor preacher, school master or sexton, as such a precious thing before God. Yea, the world regards it as money entirely thrown away.

Did it not to the least …. did it not to me. You will not be able to excuse yourself; for then he will tell you through your own conscience: Friend, were there not people who preached to you? or perhaps, poor scholars who should have been educated and trained to preach God’s word? or other persecuted, suffering poor Christians, whom you could have visited and supplied with food, drink and clothing?

46 And these shall go away into ever lasting punishment: but the righteous into life eternal.

These shall go away, etc. Who ever is so disposed that he does works of mercy for Christians, because he believes he has a faithful Savior and Redeemer in Christ, who has reconciled him with God; yea, who himself also suffers oppression from the devil and the world, on account of his faith, let him be joyful and of good courage; for he has already secured the blessed, joyful sentence: Come, thou blessed one!

I’m including some background on St. Martin and Martinmas because of his significance to European Christianity, the shape of the Church Year, and because Martin Luther and Martin Chemnitz were baptized on this date and named after him. It would not be inappropriate, then, to take this opportunity to preach on the Gospel lesson historically selected for this observance.

Martin was born in Hungary, the son of a Roman tribune of the Imperial Horse Guard Auxilia either AD 316 or 336. At age 10, and against his father’s desires, he became a catechumen of the Christian Church. At age 15 he was required to serve in the Roman cavalry (ala). When Caesar Julian (the Apostate) succeded his father Constantine, Martin left military service, was jailed for desertion, and set free by providential circumstances. He then chose to become a priest. He studied at Tours under Hilary of Poitiers, and opposing Julian’s Arianism. He preached the Nicene Confession of the faith on his way to Italy to confront the Arians. At Illycrium he was publicly scourged for his confession of faith. After a short exile he returned to Tours after Hilary was re-seated as Bishop in AD 361. Tours became a major center for promoting the genuine Nicene Confession of the Christian faith.

He reluctantly accepted the position of Bishop of Tours in 371, after which he sought to widely proclaime the Nicene Confession and convert the pagans. He launched a project of destroying pagan sacred sites. According to his contemporary and biographer, Sulpicius Severus, Martin did this even by acceptiing and surviving a challenge from the pagans as to whether the True God would spare his life. [Life of St. Martin, Chapter 13] 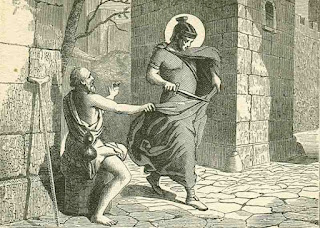 Martin made a reputation with the secular authorities as an effective advocate for the imprisoned, to the extent that the authorities would try to avoid meeting with him lest they be publicly persuaded to release certain prisoners. His charity is celebrated by the legend about his sharing of his cloak.

Martin died in 397 in central France. He became popular throughout all of Celtic and Germanic Europe.

By the 6th century the Feast of St. Martin on November 11th was observed as the beginning Quadragesima Sancti Martini (Saint Martin’s Lent). This period paralleled the Lententide before Easter. It was observed from November 11 to Epiphany, January 6th. During these 56 days with 40 days of fasting. In medieval documents Martinmas was very often regarded as the end of the agricultural year and the beginning of winter. In 581, the synod held at Macon, in Gaul declared Martin’s Day to be the beginning of a season of preparation for Christmas. According to the Gelasian Sacramentary, as early as AD 750 this prepratory season had been reduced to five Sundays preceding. Pope Gregory the VII reduced it to the four Sundays of Advent during the eleventh century. Throughout these centuries, however, Martin’s Day was still observed not only as a popular Church festival, but also as the end of the economic/legal year and the popular beginning of the winter season. (Tille, Yule and Christmas, chs. 3-6)

On the eve of Martinmas in 1483 a baby boy was born to Hans and Margarethe Luder in Eisleben, Germany. They brought their new child to the Sacrament of Holy Baptism the next morning, November 11th, and named him after St. Martin of Tours.

On November 9th of 1522 a baby boy was born to Klaus and Euphemia Chemnitz. Their son was also named in honor of St. Martin, in all probability he was also baptized on Martinmas.