Second Sunday After Michaelmas, or the 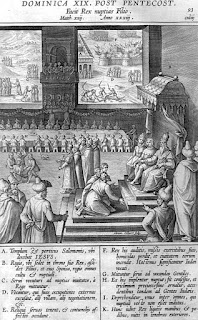 22 And Jesus answered and spoke to them again by parables and said: 2 “The kingdom of heaven is like a certain king who arranged a marriage for his son, 3 and sent out his servants to call those who were invited to the wedding; and they were not willing to come. 4 Again, he sent out other servants, saying, ‘Tell those who are invited, “See, I have prepared my dinner; my oxen and fatted cattle are killed, and all things are ready. Come to the wedding.”’ 5 But they made light of it and went their ways, one to his own farm, another to his business. 6 And the rest seized his servants, treated them spitefully, and killed them. 7 But when the king heard about it, he was furious. And he sent out his armies, destroyed those murderers, and burned up their city. 8 Then he said to his servants, ‘The wedding is ready, but those who were invited were not worthy. 9 Therefore go into the highways, and as many as you find, invite to the wedding.’ 10 So those servants went out into the highways and gathered together all whom they found, both bad and good. And the wedding hall was filled with guests.

11 “But when the king came in to see the guests, he saw a man there who did not have on a wedding garment. 12 So he said to him, ‘Friend, how did you come in here without a wedding garment?’ And he was speechless. 13 Then the king said to the servants, ‘Bind him hand and foot, take him away, and cast him into outer darkness; there will be weeping and gnashing of teeth.’

2 The kingdom of heaven is like unto a certain king, which made a marriage for his son,

The kingdom of heaven. Here we are to learn what is the meaning of the words, “Kingdom of heaven.” When you hear of the kingdom of heaven, you must not only gaze up at the sky, but remain here below and seek it among the people over the whole world, where the Gospel is preached, and where there is faith in Christ, and the sacraments are properly administered. All that is necessary is, that the Lord God remove the partition wall which intervenes; namely, when we die; then all will be pure heaven and salvation.

A marriage. He calls it a marriage, not a time of toil and mourning, but a time for rest and joy, where one adorns himself, eats and drinks and is merry.

Then he makes the picture still more attractive and beautiful. He calls it not only a marriage, but a royal marriage. This marriage is a union of the divine with the human nature. And what kind of love Christ bears towards us is presented in the most affectionate manner in this picture of a wedding. There are different kinds of love; but none is so warm and ardent as bridal love. This love looks not to enjoyment, but only to the bridegroom, and says, I wish to have thee only. And as the bride loves the bridegroom, so we also love Christ, if we believe and are the true bride. And though he gave us heaven and the wisdom of all the prophets, and the glory of all the saints and angels, we would disregard it all, unless he also gave himself to us. (See Song of Solomon 2:16) “My be loved is mine and I am his.” And he also will have my heart entirely; for the external things, such as outward virtues, are only handmaidens; he will have the bride herself. Now from this love and cordial confidence, flows the communion of all that they both jointly possess.

Thus we shall also become partakers of his divine nature (2 Peter 1:3-4.) But what do we bring to him? Nothing but grief. This an is uneven match. But he arrays his bride with all kinds of adornments.

3 And sent forth his servants to call them that were bidden to the wedding: and they would not come.

Call them that were bidden. The invitation to this wedding commenced at the beginning of the world (Patriarchs, Adam to Noah, then the prophets.)

4 Again, he sent forth other servants, saying, Tell them which are bidden, Behold, I have prepared my dinner: my oxen and my fatlings are killed, and all things are ready: come unto the marriage.

5 But they made light of it, and went their ways, one to his farm, another to his merchandise:

One to his farm. “The farm;” that is, worldly honor is a great hindrance to our appreciation of Christ and believing on him.

Merchandise. By this is meant temporal goods, avarice, or the care that we might come to want or perish.

6 And the remnant took his servants, and entreated them spitefully, and slew them.

Treated the servants spitefully. The third party are the worst; they are the high, the wise, the self-conceited spirits; these not only despise the invitation, but they also kill and murder the messengers. These were the Pharisees and Scribes. But the servants, who give the invitation to the marriage, are not only killed but also robbed of their honor and treated spitefully. Thus it is to be and our Lord God says nothing until his time comes.

7 But when the king heard thereof, he was wroth: and he sent forth his armies, and destroyed those murderers, and burned up their city.

The king was wroth and burned their city. This was done to the Jews by the Romans. But it is better to understand it spiritually; God destroyed the temple and city of Jerusalem and abrogated the Jewish economy entirely. It is true, that there is also much evil among us, such as anger, avarice, lewdness, etc., but such sins are as nothing in comparison with this detestable perversion of the word of God. The first world already, which despised Noah, the preacher of righteousness, God destroyed by the flood.

Therefore see to it, as you value your own salvation, that you beware of this sin, honor God’s word, hear it diligently and cheerfully. For if we would do this for no other reason, yet we should do it for this reason, that God has commanded it and thereby love and service is shown him. But there are yet other and greater reasons; for God says, If thou wilt diligently hear and keep my word, thou shalt be lord of the devil.

8 Then saith he to his servants, The wedding is ready, but they which were bidden were not worthy.

They which were bidden were not worthy.  The Jews crucified Jesus, and since that time they have not been worthy to hear a word of him.

Go ye into the highways. We may never accomplish so much with our preaching, that all in a whole city, village or house shall become pious; but as it is written here, Bid to come in, both “good and bad.” See I Corinthians 11:19.

11 If And when the king came in to see the guests, he saw there a man which had not on a wedding garment:

Not having on a wedding garment. That is, having no faith. For the wedding garment is Christ himself, whom we put on by faith. (Romans 13:14) Afterwards the garment imparts a splendor; that is, faith worketh love. Wilt thou bear fruit? then first become a tree; afterwards the fruit follows of itself. Now, those who were not clothed with the wedding garment are yet pious people, and far better than the former, mentioned in verses 3, 5, 6; for we must regard them as such who have heard and understood the Gospel; but depended on some kind of good works, and had not fully come to Christ.

12 And he saith unto him, Friend, how earnest thou in hither not having a wedding garment? And he was speechless.

And he was speechless. When this shall be charged against such loose Christians, either to their own conscience, or at the last day, they will not be able to give an excuse. They have known their duty very well; it has been preached to them often enough.

13 Then said the king to the servants, Bind him hand and foot, and take him away, and cast him into outer darkness; there shall be weeping and gnashing of teeth.

Cast him into outer darkness. They must perish with their works, for they do not shine forth by faith, in the true garment; they must be imprisoned with the devil in hell and endure the hellish fire; for they are bound “hand and foot,” so that they cannot loose themselves by works. And in addition to this, they must lie in darkness and be separated from God’s light; namely, from all consolation and faith, (the internal light.) Heat and cold are the two greatest plagues upon the earth. As if he would say, Ye shall have to suffer more than can be expressed in words or comprehended in thought.

14 For many are called, but few are chosen.