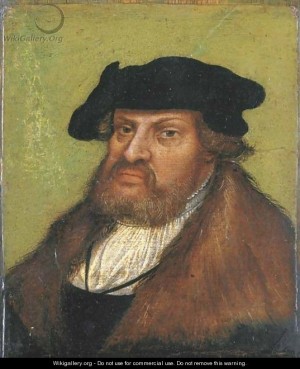 Elector John of Saxony died on August 15, 1532.  While he was the fifth of seven children born to Elisabeth of Bavaria and Ernest of Saxony, he inherited the title of Elector in 1525 when his older brother, Frederick the Wise, died with no legitimate heir. Elector John earned his moniker, Steadfast, because of his resolute support for the Lutheran Reformation in his territories and his confession of the Augsburg Confession in 1530.

On August 18, 1532, Martin Luther preached the funeral sermon based on I Thessalonians 4:13-14.  He emphasized the temporary nature of Christian death and the hope of the resurrection of the body.  Luther affirms Christian mourning for the faithful departed in the following manner: “For the steadfast man is not the one who thinks himself so strong that he refuses to be touched when a good friend has slipped away; rather the Christian is one who is hurt but yet endures it in such a way that the spirit rules the flesh.” (Luther’s Works 51: 232-33)  Most importantly, Luther exhorted his congregation to focus intently on Christ’s death and resurrection as the source of their hope and trust in God.

In this funeral sermon Dr. Luther also included some specific statements regarding Elector John’s life and death as a Christian.  Luther praised John for being a devout man who attempted to live virtuously.  However, he also referred to John’s occasional failures in government and his state as a sinner redeemed by God’s grace.

Dr. Luther recognized John’s role in promulgating the Augsburg Confession.  In fact, he stated that John had “suffered the real death, not only for himself, but for us all” when the devil attacked him at the Diet of Augsburg in 1530.  There John publicly staked his land, people, body, and life upon this confession of Christ’s death and resurrection.  After he explained that John did commit some sins as a ruler, Luther proclaimed:

Praise the fact that he confessed Christ’s death and resurrection, by which He swallowed up death and hell and all sins, and remained steadfast in his confession. This covers and swallows up the multitude of sins as the great ocean swallows up a spark of fire.  Therefore all other sins are as nothing compared with this one thing, that Christ’s death and resurrection be not denied, but openly confessed.  (LW 51: 237)

Since John had already experienced a real death through his public confession of the faith, Luther noted that his bodily death presented no struggle.  John remained steadfast in his baptism, heard God’s Word, and confessed Christ before men. (Matt. 10:32)  Similarly, all Christians possess baptism, the Gospel, and the Lord’s Supper whereby they confess Christ to the world.