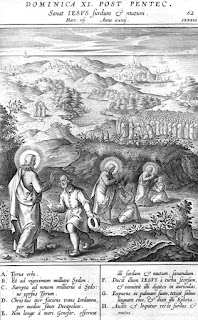 31 Again, departing from the region of Tyre and Sidon, He came through the midst of the region of Decapolis to the Sea of Galilee. 32 Then they brought to Him one who was deaf and had an impediment in his speech, and they begged Him to put His hand on him. 33 And He took him aside from the multitude, and put His fingers in his ears, and He spat and touched his tongue. 34 Then, looking up to heaven, He sighed, and said to him, “Ephphatha,” that is, “Be opened.”
35 Immediately his ears were opened, and the impediment of his tongue was loosed, and he spoke plainly. 36 Then He commanded them that they should tell no one; but the more He commanded them, the more widely they proclaimed it. 37 And they were astonished beyond measure, saying, “He has done all things well. He makes both the deaf to hear and the mute to speak.”

This gospel of the healing of the deaf and dumb man, presents our Lord Christ as a merciful, gracious man.

The deaf and dumb man. That this man was so unfortunate as to have no use of his tongue and ears, like other people, these are all the strokes and stings of the very devil. Before the world it has the appearance as if they were natural failings, for the world does not understand the devil, who causes such distress on earth. Therefore we should thank our Lord God, that he hath sent his Son, and graciously preserved us, so that the evil foe has not been able to oppress us with that kind of plagues.

Beseech him to put his hand upon him. Here we see that many were interested in the poor man, as if it were their own distress, and brought him to Jesus, that he might obtain help. Herewith both faith and love are indicated. Now we must treat of the faith of others. For here it is recorded, that they brought him to Jesus in their own faith and work; he does nothing in the matter, but it is done by the faith of another; but it is possible that through the faith of another we may attain to our own faith. Again, though Christ, who died for us, should come to us, it would do us no good, unless we be lieved on him.

The preachers and apostles, (who are here signified as those who brought the deaf mute to Christ,) lead the poor consciences to God in three ways; namely, by preaching, by correct living and by intercession. Now, when the word is administered in these three ways, it cannot fail, but must produce fruit; (Isa.55:11.) This is, because we are all priests and kings; that, like Christ himself, we may mediate for one another, and pray for faith (John 16:26 f. ; 1 Pet. i2:9 f.) Also, when one baptizes (and the Christian church prays that God would pour faith into the child) we see this in the children’s faith. But to pray effectually, lies not in our power. (See Rom. 9:1 ff.) We must submit to God’s will.

Put his finger into his ear. By the finger we understand the Holy Ghost, which he breathes into him, and makes the heart believing, chaste and pious. Then the spittle which he puts upon his tongue is the word of God; this he puts into his mouth, that he may speak.

Now, when it is said that he took him aside from the multitude and looked up to heaven, this means, If God takes me not aside from the multitude and gives me his Holy Spirit, that I may cling to the word which I have heard, all preaching will be in vain for me. But how much it costs him, that he looks up to heaven and makes use of divine power, invokes divine grace, that it may come and operate! By this he indicates that this must come from heaven, and operate with divine power in the heart of the man, and then he will be helped.

He sighed. This he did not so much for the sake of the tongue and ears of this poor man; but it was a sigh for all the tongues and ears, yea, all the hearts, bodies and souls of all men from Adam to the last one. This gospel, therefore, depicts Christ as the man who interests himself for you and me and all of us, as we should be interested for ourselves; as though he were involved in the sins and evils, just as we are; and that he sighs over the very devil, who brought about the evil. The dear Lord has seen very well what evil and distress shall yet be caused by the tongues and ears. For that is not the greatest evil which the tyrants shall bring upon Christianity against the word; but that little piece of flesh behind the teeth shall bring the greatest harm to the kingdom of Christ.

Straightway his ears were opened. The bodily benefit of having sound ears and tongues he bestows also upon the heathen; but to the Christians alone belongs this divine benefit, that he opens their eyes and loosens their tongues. (Rom. 10:10.) On account of this spiritual wonder he here makes so much ado. For thereby he wishes to indicate that it requires much trouble to cause a deaf man to hear and a dumb one to speak. He employs also a special gesture to in dicate that if we wish to be loosed from the devil’s bonds, it must be done through the external word or office of the ministry and through signs.