Scene 1, 600 B.C. Ezekiel is called to be God’s prophet to the nation of Israel. The Lord tells Ezekiel: “Son of man, I send you to the people of Israel, to nations of rebels, who have rebelled against me. They and their fathers have transgressed against me to this very day. The descendants also are impudent and stubborn: I send you to them, and you shall say to them, ‘Thus says the Lord GOD.’ And whether they hear or refuse to hear (for they are a rebellious house) they will know that a prophet has been among them.”

So this is Ezekiel’s calling and his job description. The Lord is sending him to a rebellious people, to a people who will not listen to what he has to say. It is a people you would think ought to listen to the word of the Lord, after all the Lord had done for Israel in their history. And yet, they will not listen. Ezekiel will be a prophet without honor. Nevertheless, regardless of the reception he receives, Ezekiel is called to be faithful in speaking the message the Lord gives him. Because that is what a true prophet does.

You know, sometimes when we hear the word “prophet,” we think of someone who is able to predict the future. Now sometimes the Old Testament prophets did that, foretelling what would come, because the Lord had revealed that knowledge to them. But the big thing about the biblical prophets is not so much foretelling as it is “forth-telling.” The prophets were to forth-tell, that is, they were to speak forth the word that the Lord had for them to speak. And it was a word of law and gospel. Often there was some serious law, calling the nation to repentance for their sins, even pronouncing judgment on the nation when they would not repent. And at the same time, there was also a message of gospel, a word of hope for the faithful remnant, assuring them that the Lord would not forget them, even as judgment would fall on the nation as a whole. Forth-telling, telling forth the word of the Lord, speaking faithfully the message of law and gospel–that is what prophets are called to do. And when they are not received, as was often the case, then they are prophets without honor.

Scene 2, the first century AD, about the year 30. Jesus goes to the synagogue in his hometown of Nazareth. He begins to teach there. And when Jesus teaches, it is great wisdom that he speaks forth: The proper understanding and application of God’s law, how God’s people are to live. The powerful proclamation of God’s promises, how they are fulfilled now in him, how the kingdom of heaven has come among us in the person of Christ. And yet the people would not listen. It says, “And they took offense at him.” And so Jesus says to them, “A prophet is not without honor, except in his hometown and among his relatives and in his own household.”

And so this is Scene 2B, Jesus sending out his disciples. He tells them, quite frankly, that there will be those who will not receive them. He says, “And if any place will not receive you and they will not listen to you, when you leave, shake off the dust that is on your feet as a testimony against them.’ So they went out and proclaimed that people should repent.”

Jesus tells them that there will be those who will not receive them, but still they go out. Jesus’ commission encouraged them to go, gave them the courage to go and preach. And they did what they were sent to do: They proclaimed that people should repent.

What is it to repent? And why is it so important that preachers proclaim it? To repent means to turn from your sins–to acknowledge them, confess them, and turn from them. To repent means to change your way of thinking, your whole mindset about things. To see things from God’s perspective, as his word is proclaimed to you. It means to give up on self and to rely on God for the righteousness you need to stand before him. All this is packed into the preaching of repentance. 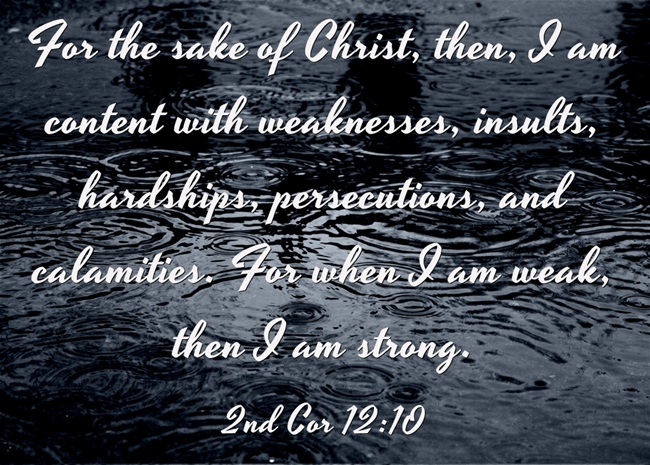 Scene 3, also in the first century, about 25 years later, maybe around the year 55, and St. Paul is writing to the Corinthians. Paul has been very busy over the years, traveling far and wide to preach the gospel of Christ, and now he reflects on his experience. Things have not always gone so smoothly. In fact, Paul has experienced a lot of rejection, a lot of suffering, for the cause of Christ. But this is what he says about that. He writes: “For the sake of Christ, then, I am content with weaknesses, insults, hardships, persecutions, and calamities. For when I am weak, then I am strong.”

“Weaknesses, insults, hardships, persecutions, and calamities”? Is this how God’s prophet ought to be treated? No, of course not. But it comes with the territory, when you bring a message that a lot of people don’t want to hear. They will hate you for it. They will mistreat you, beat you up, persecute you. That’s what happened to Paul. But it did not stop him from preaching. Because Paul had a promise that was greater than the persecution. Because Paul had a Savior who was stronger than the suffering. And guess what, dear friends? So do you.

It is our Lord and Savior, Jesus Christ. He, Jesus–he took the Big Suffering for us. Jesus took the punishment for our sins upon the cross. By his shed blood, we are forgiven. When the Son of God dies for you, that covers everything. All your guilt is taken away. And when this same Jesus rises from the dead, and he shares that resurrection victory with you in your baptism–well, that changes everything, doesn’t it? It puts any persecution into perspective. It puts our sufferings here in this life into the Big Picture of salvation and eternal joy. This is why Paul could say, “For the sake of Christ, then, I am content. For when I am weak, then I am strong.” And we have that same confidence in Christ.

And how we need it! For now we come to Scene 4, twenty-first century America, the Fifth of July, 2015. Where are we today in the U.S. of A.? I’ll tell you where we are. We are prophets without honor, we in the church who come bearing the word of the Lord. The people of this country are not listening to God’s word. They are rejecting the message of repentance and faith. Our country has gone crazy. The brainwashing, the indoctrination, has been so thorough, from all the levels of our society. Television, movies, celebrities, the entertainment industry, the media, officials in our government, corporations, public education–all of them railing against the word of God, despising God’s word, rebelling against it. And when they reject God’s word, they reject God’s messengers, the church that is faithful to God’s word.

People do not want to hear that what God calls sin is sin. They hate that. They call evil good, and good they call evil. We saw that just recently with the Supreme Court ruling legalizing homosexual so-called “marriage” in all fifty states. What is an abomination before God is now the law of the land. And so many of our fellow countrymen do not have a problem with this.

What they do have a problem with is us. We are the bigots, we are the homophobes. And they take offense at us. So get ready for persecution. In fact, it’s already here in many places. Bakers, florists, wedding photographers, people who because of their moral convictions cannot in good conscience provide goods or services that would directly approve or celebrate what is a sin before God–they are being taken to court and suffering major penalties and being driven out of business. Churches may be next. The God-haters have the church in their line of sight, and things could very well get worse, if they ever get better.

So be ready. Don’t let this stuff surprise you or get you down. Suffering for the sake of Christ has always been the church’s experience. In some ways, we’ve had it pretty easy here in America for a long time. But that looks to be changing.

But what does not change is this: God’s promises to his people. Our Lord promises to be with us, through whatever hard times we endure, whether from persecution or from any other suffering we experience. “Never will I leave you, never will I forsake you.” “Blessed are you when all men speak evil of you for my sake. Rejoice and be glad, for great is your reward in heaven.” “In the world you will have tribulation. But take heart; I have overcome the world.”

Dear friends, in this world–and now, even in our nation–we may be prophets without honor. But by God’s grace, praise the Lord, we are prophets **with** a Savior!