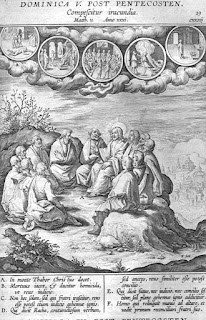 20 For I say to you, that unless your righteousness exceeds the righteousness of the scribes and Pharisees, you will by no means enter the kingdom of heaven.

21 “You have heard that it was said to those of old, ‘You shall not murder, and whoever murders will be in danger of the judgment.’ 22 But I say to you that whoever is angry with his brother without a cause shall be in danger of the judgment. And whoever says to his brother, ‘Raca!’ shall be in danger of the council. But whoever says, ‘You fool!’ shall be in danger of hell fire. 23 Therefore if you bring your gift to the altar, and there remember that your brother has something against you, 24 leave your gift there before the altar, and go your way. First be reconciled to your brother, and then come and offer your gift. 25 Agree with your adversary quickly, while you are on the way with him, lest your adversary deliver you to the judge, the judge hand you over to the officer, and you be thrown into prison. 26 Assuredly, I say to you, you will by no means get out of there till you have paid the last penny.

20 For I say unto you, That except your righteousness shall exceed the righteousness of the scribes and Pharisees, ye shall in no case enter into the kingdom of heaven.

Righteousness of scribes and Pharisees. These were the best, most learned and pious among the Jews ; yet he calls them directly by name, and accuses not some persons among them, but the whole communion; he reproves not only some of their evil works or sins, but their righteousness, and even their outwardly holy living; insomuch, that he denies them entrance into the kingdom of heaven.

But what was the piety of the Pharisees? It was not wrong that they were orderly and inoffensive in their lives and conduct. For God requires this of us always, as his word commands, “Thou shalt not kill, commit adultery; Thou shalt not steal,” etc.; he who obeys these com mandments does what is right. But in this the Pharisees did wrong, that they boasted of and depended on these outward works, to be pious and just before God, whereas God wants not only the works, but also the heart; — the heart must be pure of all hatred, wrath and evil lusts, so that he who can advance thus far, may say that he is pious. In this righteous ness ye may exceed the righteousness of the Scribes and Pharisees. Yes, you say, but where do you find such a heart ? Answer: Besides all the good which we can do, we must humble ourselves before God and say, I am a poor sinner, judge me according to thy grace!

21 Ye have heard that it was said by them of old time, Thou shalt not kill ; and whosoever shall kill shall be in danger of the judgment:

Thou shalt not kill. In the fifth commandment they considered that the word “kill” meant merely to murder some one with the hand. Thus they made a hand out of the word “thou;” and in the same manner they made out of the word “kill,” that which produced a carcass. But at the same time their heart was full of hatred, jealousy and bitterness. And although there was even among themselves, nothing but contention, jealousy, hatred and murmuring, they still passed under the excellent appearance of great sanctity; insomuch that on account of their great holiness they rejected even God’s well-beloved Son, and delivered him into the hands of the heathen Roman governor, and on account of their great holiness they would not go into the judgment hall, that they might not be defiled, believed they were guiltless of the blood of Jesus, and had kept the law perfectly. John 18:20; Acts 5:28.

The world does not regard it a sin or injustice for any one to be angry, when he is unjustly injured, and it is true, that such a one has rights against the person who has injured him; he can also justly appeal to the judge, and call for help. But he does too much, when he adds his wrath and avenges himself, and out of small justice a much greater injustice will be done.

Angry with his brother. Here the Lord designates four kinds or degrees of anger. Although one degree is always greater than the other; for the Lord himself determines the different degrees and the punishment for each, yet every one of them, (the smallest as well as the greatest,) is a sin against this commandment; consequently he who entertains only in his heart an enmity, hatred or grudge against another, is also a murderer. Let us consider well, that Christ severely condemns anger, and calls us all “brethren.”

Herewith Christ entirely excludes anger from the whole world. It is true, there must be anger, if it is exercised by those who must do so, as by parents, or government, and when the anger goes no farther than to punish sin and crime. But you must not play a sharp game, and give the reins to your anger under the authority of your office; but, when one sees another commit sin, he should admonish and warn him to desist. This is the exercise of a Christian and fraternal, yea, paternal anger. It is the anger of love, that wishes no evil to any one, but only friendship to the person and enmity to sin, as good sense may direct any one.

Vengeance is the rough irritation in the throat, and embraces all the signs of wrath.

Thou fool. How is it then, that Christ himself often says to his disciples “O fools,” and ” Ye of little faith,” which is a great offense for a Christian? Answer: Here we must look to the heart, (and not to the person.) As is the condition of the heart, so also the works are to be regarded. Just as a father often calls his son a fool, and chastizeth him yet in addition; but does all this out of love, and the heart of the father still remains sweet toward the son; so also does Christ; so do the apostles and the saints.

Hell fire. There is, indeed, only one hell, but there are different punishments therein, and consequently one is nearer to the curse than another; just as he is nearer to death, over whom it is to be decided what manner of death he shall die, than he who has been brought before the bar of justice.

It is certain, that we are all guilty of the transgression of the command ment, “Thou shalt not kill,” and he who is not divinely born again will not be able to prove himself innocent of murder.

23 Therefore if thou bring thy gift to the altar, and there rememberest that thy brother hath aught against thee;

That thy brother hath aught against thee. With these words the Lord hit the thoughts of the Pharisees very finely; they imagined that they could befog the eyes of the Lord, so that he could not see the jealousy and hatred in their hearts against their neighbors, and that other people should also regard them as pious in this respect.

God would much rather be robbed of thy service due him, than of thy duty or love to thy neighbor; and he will sooner excuse thy negligence of his service, than the ill-treatment of thy neighbor. If thou couldst offer in sacrifice all the oxen in the whole world, what would it avail? To him one human soul is worth more than all the oxen on earth.

Agree with thine adversary. Now the Lord warns also the other party that has been offended and thinks he has good reason to be angry, that he should willingly forgive, and not wait long, but resolve, if mine adversary comes and asks forgiveness, then I will cheerfully forgive him; but if he does not come, then I will still be favorable and friendly to him, because we are together on the way through this life. For otherwise his opponent might bring the matter before the Judge, God in heaven, and say, With thee I find grace, but not with mine adversary. Then there is no restitution for me, for in Luke 6:38 he says, With what measure ye meet it shall be measured to you again.