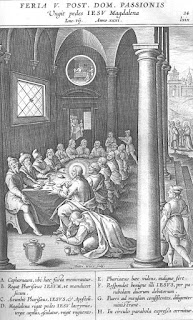 36 Then one of the Pharisees asked Him to eat with him. And He went to the Pharisee’s house, and sat down to eat. 37 And behold, a woman in the city who was a sinner, when she knew that Jesus sat at the table in the Pharisee’s house, brought an alabaster flask of fragrant oil, 38 and stood at His feet behind Him weeping; and she began to wash His feet with her tears, and wiped them with the hair of her head; and she kissed His feet and anointed them with the fragrant oil. 39 Now when the Pharisee who had invited Him saw this, he spoke to himself, saying, “This Man, if He were a prophet, would know who and what manner of woman this is who is touching Him, for she is a sinner.”

40 And Jesus answered and said to him, “Simon, I have something to say to you.”

41 “There was a certain creditor who had two debtors. One owed five hundred denarii, and the other fifty. 42 And when they had nothing with which to repay, he freely forgave them both. Tell Me, therefore, which of them will love him more?”

43 Simon answered and said, “I suppose the one whom he forgave more.”

And He said to him, “You have rightly judged.” 44 Then He turned to the woman and said to Simon, “Do you see this woman? I entered your house; you gave Me no water for My feet, but she has washed My feet with her tears and wiped them with the hair of her head. 45 You gave Me no kiss, but this woman has not ceased to kiss My feet since the time I came in. 46 You did not anoint My head with oil, but this woman has anointed My feet with fragrant oil. 47 Therefore I say to you, her sins, which are many, are forgiven, for she loved much. But to whom little is forgiven, the same loves little.”

49 And those who sat at the table with Him began to say to themselves, “Who is this who even forgives sins?”

50 Then He said to the woman, “Your faith has saved you. Go in peace.”

37 And, behold, a woman in the city, which was a sinner, when she knew that Jesus sat at meat in the Pharisee’s house, brought an alabaster box of ointment,

A woman that was a sinner. The Evangelist does not call this poor woman by name; though some think she was Mary Magdalene, of whom the Evangelist speaks in Luke 8:2. But whatever her name may have been, certain it is that she was a sinner.

38 And stood at his feet behind him weeping, and began to wash his feet with tears, and did wipe them with the hairs of her head, and kissed his feet, and anointed them with the ointment.

Washed his feet with tears. What was the cause of her distress is not mentioned; but the Lord Christ knew it very well, and mentions it twice in plain words, when he says in verse 47, “Her sins which are many are forgiven;” and afterwards in verse 48, “Thy sins are forgiven.” She confesses her sins and wishes with all her heart to be delivered from them. She speaks this not with words, but shows it by her tears. God has not commanded that we should enumerate our sins, as is customary in the papacy. It is not regarded as humility and an indication of true repentance, when a man recounts, one by one, every sin which he has committed. But inasmuch as God has not commanded it, we should not demand it in the church; but especially is such a confession contrary to Scripture, when it is intended to serve for the forgiveness of sins.

Genuine repentance. See, this is the beginning of true repentance, that, in the first place, your heart is alarmed on account of the wrath of God against your sins, and you desire very anxiously to get rid of them and to forsake them; then necessarily follows a different kind of life, as was also the case with this woman.

But this also belongs to true repentance, that like this woman, you run to the Lord Christ and seek for giveness; yea, that you have the heart and confidence in him. For, that she humbly prostrates herself at his feet, bedews them with her tears, wipes them with the hair of her head, kisses them, etc., all this is an indication that she heartily trusted in the Lord Christ and loved him.

And in this respect this woman has no advantage over us. For though we can not personally come to the Lord Christ, yet he has left his command and his word here on earth, that for his sake and in his name we should have forgiveness of sins.

39 Now when the Pharisee which had bidden him saw it, he spake within himself, saying, This man, if he were a prophet, would have known who and what manner of woman this is that toucheth him: for she is a sinner.

42 And when they had nothing to pay, he frankly forgave them both. Tell me therefore, which of them will love him most?

Which of them will love him most? It is natural that we esteem and love him whose kindness we have enjoyed and who has done us good. Therefore Simon himself must answer, “He to whom he forgave most will love him most.” What he says of the two debtors is applicable to all men. True, there is a difference among us, as regards our outward life. But when we come before God’s judgment, we shall have to say, “We have nothing to pay.”

The Pharisee, as far as his life is concerned, is more pious; but because he does not confess his debt, his debt remains upon him; the woman owes much more, but she confesses, and prays for pardon; therefore she is forgiven of her whole debt.

The other part of the teaching and the greatest consolation is, that God has such a kind, gracious heart.

44 And he turned to the woman, and said unto Simon, Seest thou this woman? I entered into thine house, thou gavest me no water for my feet: but she hath washed my feet with tears, and wiped them with the hairs of her head.

45 Thou gavest me no kiss: but this woman, since the time I came in hath not ceased to kiss my feet.

46 My head with oil thou didst not anoint: but this woman hath anointed my feet with ointment.

Seest thou this woman? Simon the Pharisee does not know that he lacks the chief thing. He thinks he is doing a great work and showing a great favor, by inviting the prophet Christ to be his guest, and placing him among the Pharisees, as a great rabbi. But this work is omitted; namely, to see his own sins and desire the pardon of his sins. Therefore the Lord Christ must reprove him, and sets forth his best works, whereof he boasted, as shameful sins.

47 Wherefore I say unto thee, Her sins, which are many, are forgiven; for she loved much: but to whom little is forgiven, the same loveth little.

She loved much. The Lord comprises the preceding parts very accurately and nicely in these words: “Wherefore I say unto thee, her sins which are many, are forgiven.” This is evident from this, “she loved much.” But to you and your companions, your sins are not forgiven For one sees in you no true love toward me, which love must follow, if you regarded yourselves as sinners, and believed that you could be released from your sins by me.

Note. The papists quote this passage against our doctrine of justification by faith, because Christ says, Her sins, which are many, are for given, for she loved much; and say forgiveness of sin is not obtained by faith, but by love. But that this is not the meaning is shown at this place by three things:

The first is Christ’s word to the woman in verse 50: “Thy faith hath saved thee.” He is designedly silent about love, when he speaks to the woman, but praises only her faith; while on the other hand he is silent about faith, when he speaks to the Pharisee, and praises only her love, as if he would say, You condemn an open sinner, who far surpasses you in justification by faith, which you do not see; but has also excelled you by the justification of love, which, in deed, you strive for, but have not attained.

The other thing is the passage in verse 47, “But to whom little is forgiven, the same loveth little,” whereby he declares that the forgiveness of sins is before love.

The third thing is the parable itself, verse 41, etc., which clearly states that a creditor frankly forgave two debtors, who could not pay.

48 And he said unto her, Thy sins are forgiven.

Thy sins are forgiven. It was in tolerable to the Jews to hear a man appropriate to himself the power to forgive sins. (Verse 49; Matt. 9:3) In order to show that he is Lord of all things, Christ absolves a sinner. Because she openly declares her faith by fruits meet for repentance, and exhibits her love, she is also publicly absolved before you and regarded as justified.

49 And they that sat at meat with him began to say within themselves, Who is this that forgiveth sins also ?

Who is this that forgiveth sins? Since they regard him not as the Christ, so he also pays no attention to them, but lets them sit and eat.