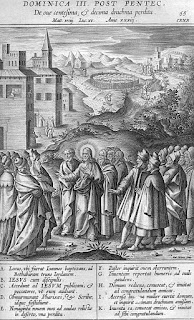 15 Then all the tax collectors and the sinners drew near to Him to hear Him. 2 And the Pharisees and scribes complained, saying, “This Man receives sinners and eats with them.” 3 So He spoke this parable to them, saying:

4 “What man of you, having a hundred sheep, if he loses one of them, does not leave the ninety-nine in the wilderness, and go after the one which is lost until he finds it? 5 And when he has found it, he lays it on his shoulders, rejoicing. 6 And when he comes home, he calls together his friends and neighbors, saying to them, ‘Rejoice with me, for I have found my sheep which was lost!’ 7 I say to you that likewise there will be more joy in heaven over one sinner who repents than over ninety-nine just persons who need no repentance.

8 “Or what woman, having ten silver coins, if she loses one coin, does not light a lamp, sweep the house, and search carefully until she finds it? 9 And when she has found it, she calls her friends and neighbors together, saying, ‘Rejoice with me, for I have found the piece which I lost!’ 10 Likewise, I say to you, there is joy in the presence of the angels of God over one sinner who repents.”

This gospel contains words which live and impart life, when they are received by themselves, and it is one of the most consoling gospels in the whole year.

Publicans and sinners. St. Luke expresses freely and plainly what kind of people Christ had about him. Everywhere in those eastern countries those were called “Publicans,” who were appointed by the Romans to collect and care for the tribute in a town or city, and returned a specified amount of the money to the government. But as this was a large amount to be returned to the Romans, these officers had to oppress the people, in order to secure a profit for themselves. In like manner the masses of the people were generally called “sinners,” who were mostly rude people, and openly lived in a disgraceful, wild way in avarice, adultery, etc. Such people are found near Christ, and they came to hear him. Now there remains yet a spark or two of virtue, or piety within them so that they have pleasure in Christ, and like to hear him preach, and see what he is doing. Who will now dare to say that God is with him, while he associates with such knaves and loose people ? They could not judge otherwise, for they knew nothing of Christ’s kingdom and office, and that he had come into the world to save sinners. His righteousness serves to atone for our sins. The outward work of love is very great when we leave our goods to others and become their servants; but the greatest work is this, when I give up my righteousness and let it serve to atone for the sins of my neighbor.

He spake this parable. Here Christ takes his own course, and shows that he will be absolutely uncontrolled, and have his own free will in every thing, as is also seen in the gospel, that there is a remarkable self-will in the man, who is otherwise such a mild, willing and serviceable man, as no other man on earth; but when they attack him with the law, and wish to domineer over him, then all friendship is at an end.

This is written for our example, that we may learn what a true Christian man is, according to the Spirit, and not to judge him by the law. For we shall be so highly exalted and free through Christ and his baptism, that our conscience, after we believe, knows no law, whether they be ten commandments or one ; whether God’s or the Pope’s, or the Emperor’s. So haughty is he, that he shall not be under the law; and again, so willing is he, that he will do much more than the law demands.

Thus do you also live, that you must wait till you are driven and plagued by the law; but of yourself do without the law, what you should do. I Peter 2:16; Rom. 6:18.

Christ could easily have answered them, as he did Nicodemus, (John 3:16-17,) but he wished to convince them with homely parables and stop their mouths.

An hundred sheep. The Lord Christ is not only self-willed, in that he does not submit to their domina tion, but he also gives good reason for his conduct, and refutes them with very fine tact; yea, he convicts them by their own actions and example, so that they must be heartily ashamed for imputing such motives to him, and blaming him for doing such great things, which they them selves do in very small things, and yet wish to be honored for so doing.

The pitiable thing. There is nothing more pitiable, than a lamb straying away from the pasture of its shepherd; it is helpless, every moment in danger of being caught and devoured by the wolf. This is just the case of a sinner, whom the devil entices away from God and his word, and leads him into sin. For there he is not safe a single moment, since the devil goeth about as a roaring lion, seeking whom he may devour. 1 Peter 5:8.

How to preach. But we must always adapt our preaching to the character of the people. You must preach the law where you find rough, rude people who live secure and without fear; for the great multitude is not the lost sheep, but it is the wild goat, that can neither be kept nor held. But those are the lost, wandering sheep, who are depressed by their sins, and who are struggling in faith, not knowing what to do or where to stay. Where you find such, be silent about Moses, but speak of the dear shepherd.

The lost is found. The lost sheep is by itself, yet this is commendable in it, that as soon as it hears the shepherd’s voice, it runs to him.

The Shepherd’s treatment. Just as the shepherd is not angry with the sheep that he found, but treats it most tenderly, so also Christ acts when he has the lamb, does not treat or drive it according to any law, but he lays it on his shoulder, and takes all the labor and trouble upon himself. He carries and protects us, so that we are safe from all danger of sin, the devil and death, though they frighten us and act as if they would tear us away and devour us. And he carries us always, as long as we live, so that we need not look upon our lives, how pious and strong we are, but rest only on his shoulder.

Will not be found. But there are also such sheep, who indeed, hear the voice of the shepherd, but will not let themselves be “found.” What takes place then? Nothing else, than that from day to day, longer and farther they go astray, and fall into the snare of the devil, so that they can no more disentangle themselves.

One sinner that repenteth. Hereby he explains whom he means by his lost sheep; namely, such a sinner that repents, etc., who feels his sins, who is heartily sorry for his sins, and who would like to reform. Thus this Gospel not only comforts poor sinners, but teaches us also how we should conduct ourselves towards this good shepherd; namely, that we come to Christ, diligently hear his word, and learn thereby to reform our lives.

More than over ninety and nine. Thus it is in all other things; the lost one causes greater pain, sadness and distress, and the found one rejoices and comforts more than those that remain, and were not lost. A mother may have many children; she loves them all and would not like to lose one of them. But if it should happen that one of them is taken sick, then the sickness makes a difference in regard to her other children, so that the sick one is now most loved, and the mother concerns herself and nurses none more diligently than the sick one.

The ten pieces of silver. The first parable refers to our dear Lord Christ. But the other parable of the woman refers to the Christian Church, which has the office of the ministry, to bring poor sinners to repentance, to rescue them from eternal death and damnation, that they may be saved. “She lighteth a candle;” that is, the word of God, and “sweeps the house;” that is, she teaches how to be pious, and how to gain the comfort of the grace of God.