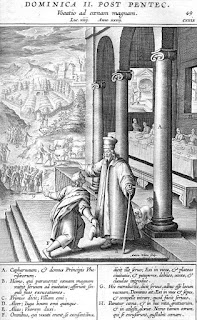 16 Then He said to him, “A certain man gave a great supper and invited many, 17 and sent his servant at supper time to say to those who were invited, ‘Come, for all things are now ready.’ 18 But they all with one accord began to make excuses. The first said to him, ‘I have bought a piece of ground, and I must go and see it. I ask you to have me excused.’ 19 And another said, ‘I have bought five yoke of oxen, and I am going to test them. I ask you to have me excused.’ 20 Still another said, ‘I have married a wife, and therefore I cannot come.’ 21 So that servant came and reported these things to his master. Then the master of the house, being angry, said to his servant, ‘Go out quickly into the streets and lanes of the city, and bring in here the poor and the maimed and the lame and the blind.’ 22 And the servant said, ‘Master, it is done as you commanded, and still there is room.’ 23 Then the master said to the servant, ‘Go out into the highways and hedges, and compel them to come in, that my house may be filled. 24 For I say to you that none of those men who were invited shall taste my supper.’”

The great supper. This gospel is not to be understood as referring to the holy Sacrament, or bread of the altar, as the papists have violently dragged it in on All Saints’ day; but the sum and substance of this parable is, that the gospel has been preached to all the world, but few people have accepted it. And it is here called a supper, that the gospel may be the last word and teaching, which shall close the world.

Eat bread in the kingdom of God. After the Lord Christ had read a lecture to the host (vs. 12-14,) instructing him how to invite guests, not the rich, but the poor, who can invite him again in the future life, one of them who wanted to be very wise and much more learned than the Lord Christ, begins to speak with great importance and says, “Blessed is he that shall eat bread in the kingdom of God.” As if in his great wisdom he would say, If it concerns preach ing, I can do it also, and better than you; for I regard this to be a right high sermon. Christ replies to this fellow-guest with this parable: Yes, it is good, you speak correctly and well; all the world could be blest, and eat bread in the kingdom of God. The supper is prepared, if they only did not despise it. Yea, you yourself and your kind, you Jews, would be blest above others, if you would only accept the invitation. But, those that were bidden remain out side, those to whom Christ was promised and prophesied will not accept him.

A certain man made a great supper. This man is our Lord Christ himself; he has prepared a great supper; the viands are grand and above measure precious; namely, the holy gospel; yea, Christ our Lord himself, he himself is spiritually the supper. Where there is a Christian congregation, there is the table. The preaching of the gospel is the dishes. The preachers are the waiters. It is a great, everlasting, truly imperishable supper, which nourishes, strengthens, gives consolation, joy, life and salvation. Therefore it is also called a great supper, because it is endless and incomprehensible, and gives everlasting righteousness, joy, and life, as sure as Christ himself has these goods.

The “many” are the Jews. There fore Paul in his epistles always puts the Jews first. Rom. 1:16.

When the hour had come. That is, when Christ was born and was to die and rise again, then the servants went out; namely, John the Baptist and the apostles, and said to those bidden, the people of Israel, Dear people, you are invited, the time is here, come now, for all things are now ready. To indicate the unity of the invitation, the Evangelist says, “And sent his servants,” for all the apostles were sent out with one word.

All things are now ready. The work of salvation was finished; every thing was performed, so that it should cost us nothing.

They began to make excuse. This is a rebuke for the guests, who were sitting with Christ at the table. Theirs is a twofold sin; not only that they despise the gospel, but they also wished to justify themselves, and be regarded as holy, pious and wise.

A good cause. These men, who excused themselves, had a right good cause. For one must have a wife and children, when God bestows them, and these must eat and drink, and in addition one must have cows, oxen, fields and meadows and so forth. But the fault is, that they cling with the heart to the field, oxen, wife, so that on that account they despise and neglect the supper. Bring in the poor, maimed, halt and blind. As if he would say, if you will reject me and my gospel, I will also reject you, The highways and hedges. We are these Gentiles, who have not lived in any city, but were idolaters, and did not know what we are, or what God is. Therefore our court is called a free and open place on the public highway in the field, where the devil has free course and space.

Compel them to come in. For the world resists the gospel in every way, because it is the word of the cross and an offense, and will not endure this teaching.

Here we see why Christ, for our sake, spares the world so long, though he had reason enough any moment to destroy it on account of our sins. But he does it not, because he needs more guests, and on account of the elect.