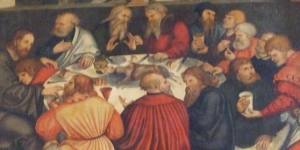 “Now the blind world, because it does not know God and his work, concludes that it is owing to its own cleverness, reason, and strength that a community or dominion endures and thrives.  Accordingly, they gather together great treasures, stuff their coffers, construct mighty towers and walls, provide suits of armor and vast supplies of provisions, enact wise laws, and conduct their affairs with courage and prudence.  They just go ahead in their arrogance without even consulting God about any of it, like those who built the Tower of Babel [Gen. 11:1-9].” Martin Luther, “Exposition of Psalm 127, for the Christians at Riga in Livonia,” in Luther’s Works, vol. 45, p. 328.

Luther’s exposition of Psalm 127:1b (Unless the Lord watches over the city, the watchman stays awake in vain) allowed him to discuss the nature of human society and government.  In this case, he explains how the sinful world ignores God and trusts in its own efforts and greatness.

“Meanwhile, God sits above and watches how cleverly and boldly the children of men proceed, and he causes the psalmist to sing in his praise, ‘God brings the counsel of the nations to naught’ [Ps. 33:10].  Again, ‘God knows the thoughts of man, that they are vain’ [Ps. 94:11].  And yet again, ‘He takes away the spirit of princes, and deals strongly with the kings of the earth.’ [Ps. 76:12].  He allows such cities and dominions to arise and to gain the ascendancy for a little while.  But before they can look around he strikes them down; and in general the greater the kingdom, the sooner.  Even though they flourish for a short time, that is in the sight of God little more than a beginning. Never does one of them arrive at the point it strives to reach.” Ibid., pp. 328-329.

Despite worldly arrogance and the cleverness of rulers God brings down great kingdoms and replaces them with ease.  Luther then presented a number of examples of God’s actions.

“If you look at the history of the kingdoms of Assyria, Babylon, Persia, Greece, Rome, and all the rest, you will find there exactly what this verse says.  All their splendor is nothing more than God’s little puppet show.  He has allowed them to rise for a time, but he has invariably overthrown them, one after the other.  As they gained a brief ascendancy, through human wit and arrogance, so much the more quickly did they fall again; not because they lacked manpower, money, goods, and all manner of resources, but because the watchman had ceased to uphold them, and cause them to see what human wit and power could accomplish without his watchful care and protection.  So it turned out that their cause was nothing but vain counsel and a futile undertaking which they could neither uphold nor carry out.” Ibid., p. 329. [Emphasis added]