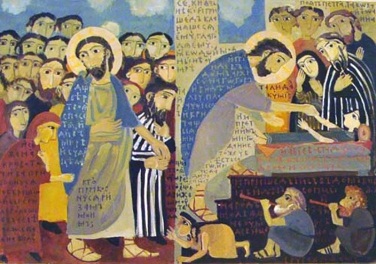 Two women, forever bound together in Holy Scripture. Two women, one an adult, suffering from a flow of blood for twelve years; the other a young girl, twelve years old, dead, but then rising from the dead. Two women, afflicted by disease and death as we all are. And yet two women, both saved, delivered, and healed, in the same way that we are. And so our theme this morning, “A Flow of Blood and a Rising from the Dead.”

Our text is the Holy Gospel for today, from Mark 5. And as I say, these two women are forever bound together in the Bible. For in the parallel accounts in Matthew 9 and Luke 8, the stories of these two women are likewise linked together. Which makes sense, since the events themselves, the healing of the woman with the flow of blood and the raising of Jairus’s daughter–those two events occurred one after the other one day in the ministry of Jesus.

Let’s set the scene. Last week we heard about Jesus calming the storm and crossing the Sea of Galilee in a boat with his disciples. Now when they disembark, there’s a crowd waiting for Jesus. They had heard about his wonderful miracles–cleansing a leper, healing a paralytic, restoring a man’s withered hand–and so people with various ailments were coming and hoping he might do a similar work for them. There was something about this Jesus that set him apart, so that people knew that he had authority from God, and that he would use his authority to help people who were suffering.

So there was a great crowd gathered around him. Here comes one of the synagogue rulers, Jairus by name, and he’s got a request. His daughter is dying. “Is there anything you can do, sir? Can you come and lay hands on her, so she will get well and not die? Please!” Boy, if there’s anything that can rip a father’s heart to shreds, it’s seeing his little child suffering. But Jairus knows how compassionate Jesus is, and he’s right, because Jesus starts to go with him.

But there’s this big crowd all around, pressing in. And as Jesus is walking with Jairus, someone in the crowd reaches out and touches his outer garment. It’s the woman I mentioned, the one with the flow of blood. She’s suffering from what we used to call, in more delicate times, “female troubles.” Perhaps a too-heavy discharge, which was causing her problems. And this has been going on now for twelve years. She had gone to doctor after doctor for all those years, and spent a lot of money, but still no cure. Any of you who have suffered from a chronic medical condition, whatever it is, you can identify.

So this woman comes toward Jesus, hoping that, even if she cannot get a private audience with him, simply touching the hem of his garment could be enough to make her well. It’s not magic that’s in her mind, but rather faith–faith in Christ’s goodness and his divine power. She does get near enough. She touches his garment and is healed.

Jesus notices this. “And Jesus, perceiving in himself that power had gone out from him, immediately turned about in the crowd and said, ‘Who touched my garments?’” “Wait,” you say. “There’s a big crowd all around him, pressing in, jostling and bumping and trying to get close, and Jesus notices when one person touches his outer garment?” Yes, and in this thought you would be thinking right along with the disciples. They said to him, “You see the crowd pressing around you, and yet you say, ‘Who touched me?’”

Now whether Jesus really didn’t know–which is possible, according to Jesus’ human nature–or whether he knows, but wants to stop and call attention to it and draw the woman in to talk to her, our text doesn’t exactly say. In any case, the woman does come before Jesus, and he does speak to her. He says, “Daughter, your faith has made you well; go in peace, and be healed of your disease.”

Jesus wants to commend this woman for her faith. And in so doing, he directs us also to the source of our ultimate healing. It is faith. “Daughter, your faith has made you well.” Now when we hear this, we need to be clear. It is not any old faith that has healed her. It is not some generic faith, in whatever you want to have faith in. And it is certainly not faith in yourself. That will only damn you, for you are a sinner.

Rather, the faith that saves, the faith that makes you whole, is specifically faith in Jesus. Jesus, the only Son of God come from heaven. Jesus, the Christ, the Messiah, the Savior of mankind. No other faith saves. No other faith will deliver you from disease and death. Only faith in Christ. And it is not because it is “your” faith, as though your act of believing is some sort of meritorious work in itself. No. Faith has value by virtue of its object. And this object, the one in whom your faith is placed, namely Jesus–he it is who saves you. So to say, “Your faith has made you well, your faith has saved you,” this is nothing other than to say it is Christ who saves you.

For you and I–and the woman in the story, and all the men and women and boys and girls of this world–we all are sinners, in need of cleansing from our sins, in order to stand before God whole and clean and at peace with God. And only the blood of Christ, God’s Son, can provide this cleansing and healing and this peace.

Jesus came to do this very thing: to suffer and die for your sins, so that you would be forgiven and at peace with God and saved for eternity, whole and sound. And this is what he has done. Believe in him, trust in him, and your faith–because it is faith in Christ–your faith will save you and make you well.

But now there’s this other woman to get to, the very young woman, the girl who is dying, Jairus’s daughter. Jesus and Jairus are headed that way. But wait! It’s too late. Here come some messengers from Jairus’s house: “The little girl has died. Don’t bother the Teacher anymore.” Do you think this is going to stop Jesus? No way. Jesus reassures Jairus: “Do not fear, only believe.” There’s that faith thing again.

They get to the house. Lots of weeping and wailing going on. “Why are you making a commotion and weeping? The child is not dead but sleeping.” “Sleeping,” Jesus says. Now the girl had actually died, she was indeed dead, but Jesus says that she’s sleeping. You see, sleep is something you get up from. And this girl is about to get up. 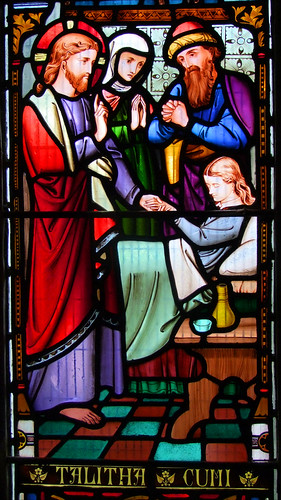 Jesus shoos everybody out. He takes Mom and Dad and three of his disciples in with him when he goes into the girl’s room. “Taking her by the hand he said to her, ‘Talitha cumi,’ which means, ‘Little girl, I say to you, arise.’” Jesus speaks, and things happen. His word carries the authority even to raise the dead. The little girl does get up, and she’s all right.

Dear friends, Jesus will speak this word to you, too, this “Talitha cumi.” Oh, now you may not be a “talitha,” that is, a little girl. You may be a teenage boy or a mature woman or a middle-aged man or even an old fogey like some of us here. But Jesus will speak to you one day and tell you to get up. And you will arise. That will be on the Last Day, the day when Christ returns and raises the dead and gives life to our dead bodies. And we will live forever in his kingdom, whole and complete, in both body and soul.

How do we know this? Because Jesus himself rose from the dead, victorious over death and the grave. And he shares this blessing with us. All of us who have been baptized into Christ, we share in his resurrection, which guarantees our own. You can take it to the bank. This is a sure hope for all those who trust in him.

You see, the forgiveness of sins, the resurrection of the body, and the life everlasting–they all go together. And they all have their nexus, their central connecting point, in Jesus Christ our Lord. He it is who forgives our sins. He it is who will raise us from the dead. He it is who gives us everlasting life.

So do not fear, only believe. Your faith has saved you, your faith will make you well, for it is faith in Jesus. Fear gives way to faith when it is faith in Christ. Your forgiveness, your resurrection, your being saved and whole for eternal life–all these are yours, by grace, because of “A Flow of Blood and a Rising from the Dead.” Yes, because of Jesus’ holy precious blood and his victorious resurrection!