The first time, in chapter 8, it says: “And he began to teach them that the Son of Man must suffer many things and be rejected by the elders and the chief priests and the scribes and be killed, and after three days rise again. And he said this plainly.” But what was Peter’s reaction to hearing this? He began to rebuke Jesus. “No, no, Lord, this should never happen to you.” And then Jesus had to rebuke Peter, saying, “Get behind me, Satan! You do not have in mind the things of God but the things of men.” Jesus predicts his Passion, his suffering, but the disciples do not get it.

The second time, in Mark 9: Jesus is again teaching his disciples, saying, “The Son of Man is going to be delivered into the hands of men, and they will kill him. And when he is killed, after three days he will rise.” “But they did not understand the saying,” it says, “and were afraid to ask him.” And right after that, what were the disciples discussing? They were arguing with one another about who was the greatest. Boy, these guys just don’t get it! Jesus tells them that he, their Master, is going to be killed, and all they can talk about is which one of them is the greatest.

And now we get the same thing here in chapter 10. Jesus gives his third Passion prediction, and for the third time the disciples demonstrate they just don’t understand. Jesus is going on ahead of them, leading the way as they head for Jerusalem, even though he has said that that is where he is going to be rejected and killed. And he tells the disciples, now in even greater detail, what will happen to him there: “See, we are going up to Jerusalem, and the Son of Man will be delivered over to the chief priests and the scribes, and they will condemn him to death and deliver him over to the Gentiles. And they will mock him and spit on him, and flog him and kill him. And after three days he will rise.”

Jesus could not be making this any plainer, but these boys just don’t get it. How come? Well, all this talk of the Son of Man, that is, the Messiah, being rejected and suffering and being killed–this did not fit their expectations of what should happen to the Messiah of Israel. They thought it should be all glory and grandeur and greatness. Drive the Romans out of Israel. Restore the greatness of the kingdom. Peace, prosperity, plenty. Everybody welcoming and acclaiming the great king, the Christ. Happy days are here again. Better even than the glory days of King David and King Solomon. Yes, the Messiah should come marching into Jerusalem and take up his rightful throne.

And if Jesus is that guy, and if they, the twelve, are his closest followers–well, then it stands to reason that they should get a share in that glory. Cabinet positions, at least, in the new administration. That was what the disciples were looking for and expecting. And among the twelve, they were also wondering which of them would get the best and the choicest spots, higher up in the administration, right next to the king himself.

So James and John speak up and voice what the rest of them are thinking: How about me for one of the top spots? They come to Jesus and they say, “Teacher, we want you to do for us whatever we ask of you.” Well, that’s a little presumptuous, but OK, go on. “Grant us to sit, one at your right hand and one at your left, in your glory.” The best seats in the house, when King Jesus comes into his glory! Yeah, that sounds pretty sweet. That’s what James and John are asking for.

Did James and John have any reason to think that they, more than the others, might be in line for these plum positions? Yes, they did. After all, they were two of the first disciples chosen. They had been with Jesus since the beginning of his ministry. And Jesus had picked them, James and John, to go with him on a couple of assignments that the other guys had not been chosen to go on. The raising of the little girl from the dead. The trek up the mountain for the transfiguration. Oh, Peter had been in on those occasions, too. Peter, James, and John seemed to form the “big three” out of the twelve, Jesus’ inner circle. But James and John want to put in their claim for top spots before Peter opens his big mouth. So Jesus has to straighten them out about this glory business. He says, “You do not know what you are asking. Are you able to drink the cup that I drink, or to be baptized with the baptism with which I am baptized?” And they answer back, without the slightest hesitation, “Oh yeah, sure, we can do that. No problem.” Really, James and John? Do you really realize what you are saying? Do you understand what this “cup” and this “baptism” will entail? It will be a cup of suffering. It will be a baptism of blood. You see, that is what Jesus himself will endure. Are you ready to endure that kind of suffering with him? To be on Jesus’ right and on his left–the next time we’ll hear that expression is when Jesus is hanging on a cross and there are two criminals hanging next to him, on either side. Do you want that? But that is what will come, if you want to follow Jesus.

James and John are theologians of glory. They don’t understand the necessity of the cross. But then, that sort of thinking comes naturally to us all. The other ten disciples are indignant with James and John, not because they asked the wrong question, but because they thought to ask it of Jesus first. They too are theologians of glory. And so are we all, by nature. We all want what’s coming to us, as long as it’s good. We deserve it. God must be pleased with us. We’re better than other people–well, at least the really bad people. Gimmee, God, gimmee what I want. Glory and good stuff. Success, not suffering. I deserve it.

Like James and John, we would like people to serve us. We would like to have other people do what we say and to please us. In our minds, the world revolves around us, around me. But this sinful tendency of ours, to be turned in on ourselves, this is what sin is. And what sin deserves is death. God’s condemnation, not our elevation. And so then, this is precisely why Jesus had to go up to Jerusalem, to suffer and to die–for sinners like James and John, for theologians of glory like you and me.

Jesus has to straighten us out. He has to straighten out our thinking, and even more than that, he has to get us straight with God, or else we would be hopelessly lost. Jesus tells the disciples, and he tells us, as well: “You know that those who are considered rulers of the Gentiles lord it over them, and their great ones exercise authority over them. But it shall not be so among you. But whoever would be great among you must be your servant, and whoever would be first among you must be slave of all. For even the Son of Man came not to be served but to serve, and to give his life as a ransom for many.”

The way of this world is to strive for glory and power, and when you get it, to use it for your own advantage. But that is not the way it is in Christ’s kingdom. The way of greatness in God’s kingdom is the path of service. To serve others, in love. If you are in a position of authority, you are there to serve those entrusted “under you,” so to speak. If you are a father or mother, you have that office of authority in order to be God’s channel of blessing to your children. If you are a husband, you are not there to lord it over your wife; you are there to lay down your life for her, as Christ loved the church. And so it goes. Servanthood equals greatness in God’s kingdom. This is something the disciples would learn and would come to understand, but at this point they still don’t get it. 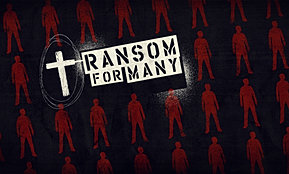 To serve and to give his life as a ransom. “Ransom”: That’s a key word here. “Ransom,” it could also be translated “redemption.” The term was used in the ancient world for the price that was paid to set somebody free from a state of bondage. If there was a slave or a prisoner of war, and that person could not free himself from his captivity, somebody else might come along and pay the ransom price, the redemption, that did set that other person free. And that’s what Jesus is talking about here when he says he came to give his life as a ransom. Jesus will pay the ransom, he will redeem us from our state of bondage. We could not free ourselves. But Jesus would do this, he has done this, by giving his own life as the ransom that sets us free.

Luther captures this perfectly in his explanation to the Second Article of the Creed: He, Christ, “has redeemed me, a lost and condemned person, purchased and won me from all sins, from death, and from the power of the devil; not with gold or silver, but with his holy, precious blood and with his innocent suffering and death, that I may be his own and live under him in his kingdom,” and so on.

Dear friends, Jesus came to serve and to give his life as a ransom, as your redemption. He did this for you when he went to the cross for your sake. By his death, you have been set free from death. By his resurrection, you have been set free to live a new life. It is a life of love and service, a life that may involve suffering and sacrifice for now, but one which ultimately will be far outweighed by the glories of the age to come. Do you get it? Yes, you do! You get all of Christ’s righteousness, all of his forgiveness, all of his life–yes, all the blessings of his kingdom–all yours as a gift.