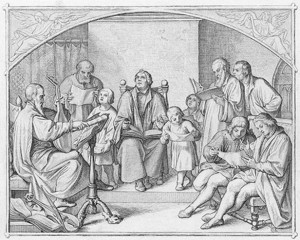 We continue to look at how the Small Catechism was used in 1580; the year the Lutheran Book of Concord was published and adopted as the confession of what Scripture teaches.

How did they use the Small Catechism?

The second of these three sections says this:

In the cities the superintendents (if there be any), or the pastors shall demand of the council a list of the citizens and inhabitants of the city arranged according to the districts in which they reside, which the council everywhere shall furnish.

As some have been frightened away from this examination because at some places when the young people, especially servants and maids, cannot answer all the questions quickly, the clergy are in the habit of using harsh words, thus embarrassing them before the people, and as pastors and clergymen occasionally ask difficult questions–ofttimes unfamiliar not only to the young but even to the old–so that it is impossible for them to answer, the visitors shall seriously admonish the pastors in cities and villages to speak to the young people in a friendly, fatherly manner, with all mildness and restraint…. Thereafter they shall praise the children and servants who are able to answer from their Catechism, and shall admonish the others, where they have failed that they should learn it from those who knew it before the next examination.

The pastors and clergymen, however, shall ask the young people no other questions than those contained in D. Luther’s Catechism, always using the same words…. And finally, if there be children who have learned the Catechism at school, and are sure of it, there is no need of a long examination and questioning, but when these have been questioned about several parts of the Catechism, now about one, then about another part, the clergyman can easily see whether the child remembers the Catechism or not. But those who have learned it only partly, he shall ask how far they have progressed, and then ask of the children of the same grade one question after another, in which way he can easily learn how far they have progressed. He should praise them for what they have learned, and also in a friendly and fatherly manner admonish them to continue their studies and not cease till they have learned the whole Catechism.

But if there are people who never have been at school and therefore have not learned the explanation of the Catechism, they shall nevertheless be questioned as to whether they know the Lord’s Prayer, the Creed, the Ten Commandments, the words of the institution of Holy Baptism, of the Lord’s Supper, and the Holy Absolution as these are publicly read in the churches to the people on all the Sundays and feast days. Afterwards they shall admonish them with gentle words inf a fatherly way that they learn the questions and explanation of the Catechism from the children who have been at school. A whole year should be allowed for this purpose and if they will apply themselves with diligence, they can easily learn these portions from others.

That the parents, masters, and mistresses may not only see how their children and servants are questioned, but also hear what they answer, especially as some are not able to answer satisfactorily and there is so much more reason for urging their children to diligently study the Catechism at home … the parents, if not both, at least one …, as well as the master or the mistress shall themselves bring their children and servants to this examination …. And as the parents in the cities have probably learned the Catechism in their youth, though they no longer retain the exact words in their memory on account of their age, and also are timid about speaking publicly so that if they miss only in one word, they are in danger of being mortified before the servants and ridiculed by the young people who would be tempted to apply less diligence to the learning of the Catechism, because they see their parents no longer know how to recite it word for word–they shall be exempted from this examination.

In the villages, however, it is to be held with young and old alike, though with a similar consideration of the conditions, especially as far as the older people are concerned, whose religious knowledge can be ascertained in the Confession. Since not only young children, but frequently the grown sons and daughters, servants and maids are also afraid to speak publicly and for that reason cannot recite what they have learned and know well, the Visitors [pastors who helped to supervise several churches in a region] shall make it a rule in all churches, especially the small ones that the pastor shall direct the servants to remain in their usual pew, or, when the churches are large, outside of the choir so far from the clergyman that they cannot hear what the pastor speaks with the others or what they answer. Afterwards through the custodian, district master, or anyone who most opportunely can be charged therewith, he shall summon through a note one group of servants after the other to come to him into the choir; then he shall examine them as above indicated.

Where, however, the congregation is large and the clergymen numerous, they shall station themselves in the choir in different places, that nobody may overhear another, confuse him or the servants, or disturb him in the examination. So the people will not be detained too long and all will be done with good will and to the profit of the Church.

The clergymen will subsequently be spared much labor in the Confessional if they thus learn to know their parishioners’ and hearers’ understanding of their faith by this public examination…. And the pastors and clergymen shall diligently instruct the people that this is the right Christian confirmation or firmung, that is the affirmation of the faith which the sponsors have confessed in the place of the new-baptized infant, and in which the child was baptized, and remind them that they are to live according to this faith all their lives.

1929 Luther’s Small Catechism: A History of Its Origin, Its Distribution and Its Use. Wartburg Press, Chicago. Pages 157-159