“I love your Christ, but I dislike your Christianity.” That is a quote that has been attributed to Mahatma Gandhi, the leading figure from India of the 20th century. Sometimes it’s quoted as “I like your Jesus. I don’t like your Christians.” Or something like that. Whether Gandhi actually said this or not, the point is the same: Some people want to have Jesus–or at least the Jesus of their imagination–they want to have Jesus, but without the church. They try to pit the two against each other, Jesus and the church. Now Gandhi himself was not a Christian. But there are even people who consider themselves Christians who would say pretty much the same thing. They claim they can be Christians without any association with the church. They like to call themselves “spiritual but not religious.” “Oh, I believe in God,” they say, “but I don’t believe in organized religion.” Or, “You don’t have to go to church to be a Christian.” Again, they’re trying to pit Jesus against the church.

Our text today is the Holy Gospel, from Matthew 16. There Jesus tells us how inseparably committed he is to his church. First, though, let’s set the scene. Jesus has been traveling around with his disciples for some time now. He’s been going around Galilee, engaged in his ministry of preaching, teaching, and healing. The twelve disciples have been traveling with him, witnessing all these things. And they have seen the reactions of the people where Jesus has been. They have heard the talk about Jesus. They have heard people’s comments and opinions about their Master. And so now Jesus asks them what they’ve been hearing. He’d like a report. So he asks the disciples: “Who do people say that the Son of Man is?” By the way, as you probably know, whenever Jesus says “the Son of Man,” he’s referring to himself.

So now, disciples, give a report: “Who do people say that the Son of Man is?” And the disciples tell him: “Some say John the Baptist, others say Elijah, and others Jeremiah or one of the prophets.” Well, nice. Nice responses there. People are saying nice things about Jesus, comparing him to the prophets of old. And to some extent, you can understand why. Elijah, Jeremiah of long ago, John the Baptist of more recent vintage–those men were prophets of God who preached the word of God boldly, courageously, calling Israel to repentance. And so did Jesus. So you can understand the similarity and the comparisons. Those are nice things people are saying about Jesus. All complimentary. But all falling short of the mark.

You see, Jesus is much more than a prophet. In fact, he’s the one the prophets were pointing ahead to. Jesus is the one they were looking forward to as the fulfillment of their preaching. So to leave it at just “Jesus is another prophet” is lowballing Jesus and missing the point.

And that’s what Jesus wants the disciples to realize and to be clear on. So he turns the question around and asks them now for their own answer: “But you–who do you say that I am?” And Simon Peter, usually the first one to open his mouth, speaks up for the group. He says, “You are the Christ, the Son of the living God.” Well, see, that’s more than merely saying that Jesus is another prophet. It’s a whole lot more. Peter calls Jesus “the Christ,” that is, the Messiah, the Anointed One, the great deliverer and end-time king sent from God, as promised for centuries. To call Jesus the Christ is to say that he is the fulfillment of God’s great plan to bring in the kingdom of heaven here on earth. It is to say that Jesus is the fulfillment of all our hopes, that he is the one and only Savior sent from God. Indeed, Simon Peter says that Jesus is “the Son of the living God.”

What does Jesus think of Peter’s answer? He commends it, big-time! “Blessed are you, Simon Bar-Jonah! For flesh and blood has not revealed this to you, but my Father who is in heaven.” To know who Jesus is, to know that he is the Christ, the Son of the living God–this is not something you can come up with on your own. No, God has to reveal it to you. He has to open your mind to understand this and take hold of it as your own, by faith. Faith is the gift of God, which he gives you and works in you through the gospel of Christ.

And then Jesus adds something else about what Peter has just said. And here is where Jesus ties this truth about himself–he ties it, inseparably, to the church. Jesus says, “And I tell you, you are Peter, and on this rock I will build my church, and the gates of hell shall not prevail against it.” Jesus is saying that this apostolic confession of Christ–of who Jesus is and what he came to do–that this apostolic preaching is what Jesus will build his church on. Peter and the other apostles will be sent out with this gospel, and through this, Jesus will build his church. 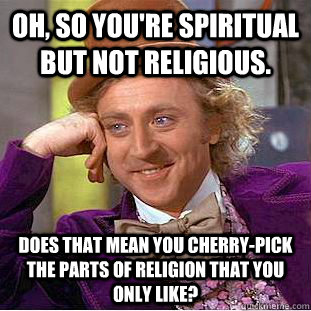 So Jesus is committed to building his church. And this church will be built on the pure proclamation of who Jesus is as the Savior sent from heaven. Jesus and the church are inseparable. You can’t have one without the other. Although some try.

And you say you don’t believe in organized religion? What, you prefer disorganized religion? You will have a religion of some sort, a certain set of beliefs and practices, whether you admit it or not. The important thing is to have the right religion, the one that agrees with what God reveals in Holy Scripture, the one that teaches Christ aright and leads you into his church.

You see, God doesn’t want to have “Lone Ranger” Christians. It’s not just about “me and Jesus.” No, Christ has founded his church. This is his plan. And it’s a good one. Church is where Jesus has promised to be. “For where two or three are gathered in my name, there am I, in their midst.” Inseparable. “And lo, I am with you always, to the end of the age.” Inseparable. Jesus and his Christians, Jesus and his church. God has this great big family, all around the earth, and in every locality, and it’s called the church. We are family. We are the body of Christ, and each one of us, a member of it. One part of the body can’t say to the other parts, “I don’t need you.” No, we need one another, and this is by God’s design. We help one another in the body of Christ, we encourage one another, even by our presence, whenever the church comes together. God wants us to live together and to work together as his family. To say, “I don’t need to go to church to be a Christian,” is just wrongheaded.

So there are those who want to have Jesus without the church. And there are those who want to have church without Jesus. At least without the Jesus who dies on the cross for the sins of the world. No, those so-called churches, if they mention Jesus at all, he’s more of a life coach, who gives good advice so you can live your best life now. This made-up Jesus is your best buddy, and maybe a little bit of a good-luck charm, to give you what you want. But that’s not the Jesus who is.

No, the Jesus who is, is the one and only Son of God who came down from heaven for us men and for our salvation. True God and true man, he won our salvation by being crucified for us, shedding his most holy blood to purchase our forgiveness. Having won this salvation for us, he rose from the dead, bodily, in victory over sin and death. And he did this for you, my friend! Jesus Christ did this for you!

And so we preach Christ crucified. Through the foolishness of this preaching, God is saving sinners like you and me. And this happens in and through the church. So we are not ashamed of the church, for this is where the gospel happens. This is where Jesus has promised to be present. This is where Jesus speaks and where he gives out his gifts of forgiveness, life, and everlasting salvation. Through Word and Sacrament. For you. And this, then–this is why you need Jesus and why you need his church, too. It’s a package deal.

Yes, Jesus and the church. Inseparable. You can’t have one without the other. Learn it. Love it. Live it. It’s all good.