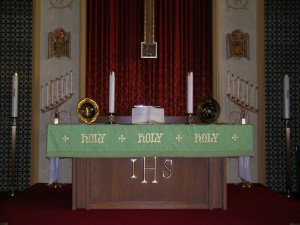 Historic Examples: Martin Luther, because he wrote three of the Lutheran Confessions: the Small Catechism, the Large Catechism, and the Smalcald Articles; and because our theology was originally his.

Philip Melanchthon, because he wrote three of the other Lutheran Confessions: the Augsburg Confession, its Apology, and the Treatise on the Power and Primacy of the Pope.

Martin Chemnitz, because he was one of the primary authors of the Formula of Concord, and because it was his idea to assemble a “Book of Concord” (Latin: Concordia) of confessions to settle the theological disputes of his day.

All of the “confessors”–such as John the Steadfast–Elector of Saxony, Philip–Landgrave of Hesse, and John Frederick the Magnanimous–Elector of Saxony–who put their signatures on the Lutheran confessions, and thereby confessed their faith before the Catholic emperor, the popes, the devil, and the whole world.

The orthodox Lutheran kings, princes, theologians, pastors, and laymen in Europe in the 16th to 18th centuries.

The pastors and theologians of the “confessional revival” of the 19th century in Europe, such as Claus Harms of Kiel, Johann Scheibel of Breslau, Wilhelm Löhe of Bavaria, Theodore Kliefoth of Mecklenburg, Adolf Harless and Franz Delitzsch of Erlangen, August Vilmar of Hesse, Andreas Rudelbach of Saxony, Heinrich Guericke of Halle, and Ludwig Petri of Hanover.

The founders of the Lutheran Church–Missouri Synod, such as Martin Stephan, C.F.W. Walther, Friedrich Wyneken, and Wilhelm Sihler.

The members of the “Evangelical Lutheran Synodical Conference” and their theologians and church-leaders, such as Francis Pieper, Adolf Hoenecke, and Herman Amberg Preus.

Ecclesial-Political Answer: With respect to the matter of church government, confessional Lutherans are suspicious of monarchical and autocratic forms of church government. This stance should be expected among all Protestants, with churches in the Anglican communion being the exception.

People should not be deceived by Melanchthon’s concession to the papacy in his subscription to the Smalcald Articles, for he was the author of the subsequent “Treatise on the Power and Primacy of the Pope” which stated that in his day “the marks of the Antichrist coincide with those of the pope’s kingdom and his followers” (Tr 39).

Confessional Lutherans have accepted various forms of church government, including church-governance by bishops, but they have always preferred a collegial or a balance-of-power approach, e.g., Chemnitz’s three estates, Brenz’s consistories, and the American synodical-congregational structure. No single form of church government is mandated in the Lutheran confessions, although many abuses of church government are condemned therein.

Ecclesial-Theological Answer: Confessional Lutherans see the “Book of Concord” as a fixed constitution, which all church officers, clergy, and assemblies are obligated to follow. This obligation is known as “confessional subscription.” Confessional Lutherans reject ideas of “doctrinal development,” because the confessions are drawn from a fixed body of revelation, namely, the canonical Scriptures, and because these ideas undermine the principle of the confessions as a fixed constitution

Many people wonder why it is necessary to add the qualifier “confessional” in front of the noun “Lutheran.” This is because many so-called “Lutherans,” since the beginning of the 18th century, have not agreed with the theology of Martin Luther and his immediate successors. By force of political power and/or influence, these quasi-Lutherans have claimed the name of “Lutheran” without that term’s original intent and substance. How then do they claim to be Lutheran? Quasi-Lutherans simply claim Martin Luther as their ideological forefather without warrant, even though they disagree with all or most of his theology.

Today all three–LCMS, WELS, ELS–are English-speaking and multi-ethnic. All three are in fellowship–or some kind of association–with the other confessional Lutheran churches around the world. At the present time, WELS and ELS are not in fellowship with the LCMS or its affiliates. All three agree that the largest Lutheran church-body in America, the “Evangelical Lutheran Church in America” (ELCA), is quasi-Lutheran.

Therefore, when we use the term “confessional Lutheran” today, it is a way of referring to the LCMS, WELS, and ELS, and all their members and synodical affiliates, with a single term.

For information about the LCMS, WELS, and ELS, check-out their official web-sites here: lcms.org ; wels.net ; evangelicallutheransynod.org.