Today is the Feast of the Ascension of Our Lord, always forty days after Easter, thus always on a Thursday. On Ascension Day we celebrate what Christ’s ascending into heaven means for us as the church. It means many things, certainly, and we could focus on many aspects of this great event: For instance, on how, after his resurrection and before his ascension, Jesus opened the minds of his disciples to understand the Scriptures, that they are fulfilled in his death and resurrection, and how he told them to preach repentance and forgiveness of sins in his name. Or, to use another example, we could focus on how Jesus promised to send the Holy Spirit upon the church, to empower our mission to the world. Or how, upon ascending, Jesus lifted up his hands to bless the church. Or how the angels announced that this same Jesus will come again. And so on. All these are legitimate Ascension Day themes.

But tonight I want to focus on another aspect related to Christ’s ascension. And that is, on what Christ is doing now, now that he has, in the words of the Apostles’ Creed, “ascended into heaven and sits at the right hand of God the Father Almighty.” And to do that, we’ll look at a portion of the Epistle reading for Ascension Day, from Ephesians 1, where St. Paul says that God the Father raised Christ from the dead and “seated him at his right hand in the heavenly places, far above all rule and authority and power and dominion, and above every name that is named, not only in this age but also in the one to come. And he put all things under his feet and gave him as head over all things to the church.”

Ascended into heaven, seated at God’s right hand, with “All Things under His Feet.” That gets at what Christ is doing right now, on behalf of us, his church.

You see, when Christ ascended, he wasn’t going on vacation. It’s not like he’s up in heaven now taking a nap. No, our risen and ascended Lord Jesus Christ is busy and active right now, ruling all things for the sake of his church. This should be very encouraging and comforting to us. It tells us that we’re not on our own here in this hostile world, having to tough it out in the midst of the chaos, because the earth has some absentee landlord and therefore things are out of control. No, that is not the case. And the ascension of Christ, his being seated at God’s right hand, with all things under his feet–this assures us that we’re not on our own.

Let’s start with this matter of Christ being seated at the right hand of God. What is the significance of that? To be seated at a king’s right hand means that that person occupies a position of great honor and great authority. Since for most people the right hand is the hand of power, for most of history the image of the right hand has been associated with authority and honor. Even in our culture, we still use the phrase “to be someone’s right-hand man.” It means that that person is the other person’s go-to-guy, the one he relies on, the one who has been authorized to act on behalf of the other.

That describes Christ now in his relation to the Father. Having accomplished the mission on which the Father had sent him–in other words, having won the salvation of the world by his death on the cross and his resurrection from the dead–Christ now is seated at the right hand of the God the Father, exercising all authority in heaven and on earth. And he is using this power for the good of the church.

Listen, this world is not spinning out of control, even though it may look like it at times to us. The truth is, we do not have an absentee landlord. No, Christ is in control, governing all things for our good. We in the church are under his care and his blessing.

On the other hand, for those who are enemies of Christ and enemies of his church, God has placed them under Christ’s feet, that is, under his dominion and subject to his rule. These enemies have no real power over us. They cannot hurt us or harm us ultimately. Oh, they may for a time wage war against the church, but they cannot prevail in the end.

Who are these enemies? The devil, who attacks the church, and the hostile world, which persecutes the church. But these enemies have been defeated and subdued. Christ has won the victory over them. They lay vanquished, under the feet of our great Champion and Conqueror, Jesus Christ.

Often, though, it doesn’t seem like Christ is really in charge. The world’s events seem like the tale of a madman, full of sound and fury, signifying nothing. Disasters and tragedies seem to be running amok. The church looks like it is losing–losing respect, losing influence, losing members. And our faith may be shaken as we look at these events on the surface. We feel like we’re all on our own, having to fend for ourselves, and it’s not going well.

Even so, despite appearances, history does have a purpose and a goal. It is going somewhere. This is the church’s time. We’ve been sent on a mission, to preach the gospel to all nations. And Christ, God’s right-hand man, is going to see to it that we get to do it.

“All things under his feet.” And how do we know that this dominion that Christ exercises–how do we know that he is using this power for our benefit? Well, just a take a look at those feet. These are the feet that traversed the dusty roads of Palestine, bringing blessing wherever he went. “How beautiful the feet of him who brings good news!” These are the feet of Jesus, who preached the gospel to downtrodden sinners, who announced and brought with him the kingdom of heaven. These feet, the feet of Jesus–these are the feet at which people brought their sick and crippled, and Jesus healed them. These are the feet that a woman wet with her tears and wiped with her hair, feet that she kissed and anointed with oil, so grateful was she that Jesus had forgiven her sins. These are the feet at which Mary of Bethany sat, listening to her Master’s teaching. Then later that same Mary also anointed Jesus’ feet with fragrant oil, which Jesus interpreted as preparing him for his burial. Yes, take a look at those feet. 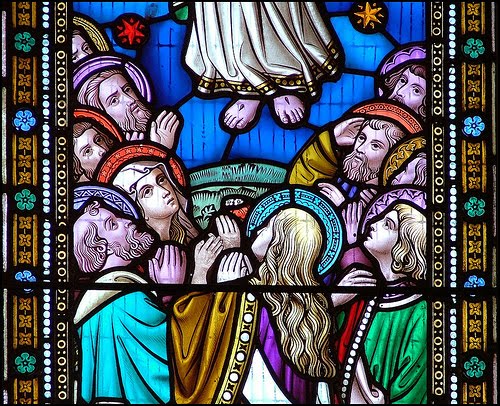 Dear friends, these are the feet–the feet of Jesus–that were nailed to the cross, in order to win your salvation. These are the feet–and the hands, and the side–that Jesus showed to his disciples, to show that it was really he, that he is indeed risen from the dead, and that his death on the cross is how he has won the victory for us, victory over sin and death and the devil. Those feet, those nail marks in his feet–this is how you can know for sure that now, now that God has placed all things under his feet, that Jesus is using his authority for your benefit.

“All things under his feet.” Jesus’ enemies, and thus our enemies, lay vanquished in the fight. They have no power over us. And the last enemy to be destroyed is death. Christ has already won the victory over death, but for a while yet, death still takes its toll among us. Yet Christ has taken the sting out of death. On the day when he returns–and that day is coming–on that day death itself will be overthrown once and for all, finally and for good. That day is coming, my friends. Christ is coming, coming back for us, coming back in glory, just as those angels at the Ascension announced.

Dear Christians, when it looks like the enemies are winning, when it feels like Jesus has gone on vacation and isn’t caring for you–at those times, remember Ascension Day. Remember that Jesus Christ has won the final victory for us, that he has ascended into heaven and is seated at God’s right hand and that all things have been placed under his feet. Oh, they’re the feet with the nail marks in them, you can’t miss them. How beautiful are those feet!