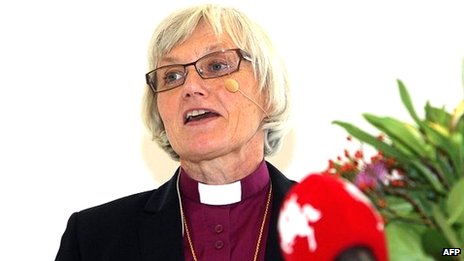 On October 15th,  Rev. Antje Jackelen was elected the first woman Archbishop of the Church of Sweden in a substantial win.  She joins the ranks of Rev. Elizabeth Eaton as Presiding Bishop of the ELCA.  Before those elections, the Evangelical Church in Germany elected Rev. Margot Kaessemann as their head but she resigned in 2010 after her arrest for drunk driving.  These elections continue the feminist interdenominational conquest of the western church.

An article about Rev. Jackelen’s election notes that she is a mother of two and, “…is known in Sweden for her statements questioning the Virgin birth and endorsing the theory of evolution.”  Ordination of women and denial of the Creeds is  certainly not “that old-time religion” and both heresies of women’s ordination and denial of the Creed go glove on hand.

Pr. Louis A. Smith of blessed memory cited at the end of his essay, “How I Changed My Mind” [i], C. S. Lewis who said that should the Church ordain women we would quickly find that we have a new religion.  My purpose in this posting is to explicate the ideology of this new religion, then next to show that this religion is actually not “new”.

Prior to the ELCA’s decision to allow for false marriage in 2009, I attended my last conference as an ELCA pastor.  In  our discussion, I talked about the Biblical case for marriage.  A woman pastor said in alarm, “That would mean we would have to revisit ordination of women and divorce and remarriage.”  I said, “Yes, that’s what it would mean”.  I thought I heard the air being sucked out of the room.  The feminist hermenuetic (interpretative lens) is a parting of the ways into two religions, as incipient Gnosticism  caused a parting in the days of the Apostle John (see 1 John 2: 19).  Today it is a feminist religion not based upon Scripture, using a particular  feminist ideology (which is very much gnostic), and the other  grounded in the written Word, i.e. Confessional and catholic.

Feminism has two types:  liberal (political) feminism and gender feminism.[ii] The women’s liberation movement began as political feminism but eventually has been replaced by gender feminism, especially in churches.  Rev. Richard John Neuhaus made this distinction in his magazine First Things, based upon articles by philosopher and professor Christina Summers of Clark University:

“The goal of liberal feminism is straightforward: women have a right to fair treatment and equal opportunity in trying to realize their aspirations. Gender feminism is very different, indeed radically different. Gender feminism views all of social reality in terms of the “sex-gender system.” According to gender feminist Sandra Harding, this system is a “system of male-dominance made possible by men’s control of women’s productive and reproductive labor, where ‘reproduction’ is broadly construed to include sexuality, family life, and kinship formations, as well as the birthing which biologically reproduces the species. . . . The sex/gender system appears to be a fundamental variable organizing social life throughout most recorded history and in every culture today.” It is that system that must be replaced.”[iii]

I focus on gender feminism.

I do not know why Rev. Jackelin denies the virgin birth, but I will speculate it is simply not the assertion that the Bible is errant, but the Bible is errant because it is sexist and patriarchal, and oppressive of women.  This is the raison d’etre of inclusive language, which was the next win in the feminist conquests after woman’s ordination, in much of the church and society.  The proponents of the  new alien hermeneutic have one goal:  replace the old patriarchal church with the “new” church, the gender feminist church. I heard an ELCA vicar years ago introducing himself to the conference: “I am a recovering sexist”. Gender feminism is pervasive.

We can debate political feminism as it pertains to the nation but gender feminism is simply non-debatable in regards to the Church and the Scriptures.  It is also a denial of basic biology, per the quote above, as is gay marriage.  If biology can be denied, then why can not Biblical theology be replaced? Yet the reverse cannot happen.  The “old time religion” is incrementally being replaced with ideological and political zeal under the guise of religion and ‘spirituality’.   The gender feminists have and will try everything in their power to marginalize the orthodox of all Christian church bodies using friendly illiberal politics and academia where gender feminism has taken control. A trustworthy conservative pastor here in town related to me that a member of  the ELCA congregation of which I was pastor, told him about me, “Oh, he’s fundamentalist.”  This is at first a ‘damning’ accusation but it can get worse.

The marks of this new religion are:

I chose these ‘marks’ arbitrarily, there are probably more, but I stopped at seven to parallel in antichrist fashion Luther’s marks of the Church:

So every ‘win’ of a woman pastor breaking the “stained-glass ceiling” by election to  a higher churchly office is not considered  in feminist ideology simply as a win for women but a win for the alien ‘new’ religion to replace orthodox and Confessional religion. If you can ordain women, contrary to a ‘sexist’ Bible, why cannot one deny the virgin birth?

Yes, gender feminism is antichrist because it is a denial of  the basic Christian doctrine of the Biblical Name of the Father and the Son as patriarchal constructs, and so it is denial of the Son and hence antichrist:

This is not actually a ‘new’ religion.  It is as old as Eve.  It is Eve and us “The serpent asks, “Did God say, ‘You shall not eat of any tree in the garden’?” The serpent does not dispute this word but it enables man to catch sight of a hitherto unknown profundity in which he would be in the position to establish or dispute whether a word is the Word of God or not. The serpent itself in the first place only suggests the possibility that man has perhaps misunderstood here, since God could not possibly have meant it in this way. God, the good Creator, would not impose such a thing upon his creature; this would be a limitation of his love. The decisive point is that this question suggests to man that he should go behind the Word of God and establish what it is by himself, out of his understanding of the being of God.”[iv]

I can hear someone saying, ‘Gender feminists in the Church only want to see if this Biblical word about women in the Church is actually God’s or Christ’s, or a church oppressive of women, that’s all.  God could not have possibly meant what is written in the way the text has been understood.  You don’t want to limit God’s love, now would you, when it comes to your mother, your sister, your co-worker?  Do you want to be oppressive?’   Later, Bonhoeffer simply states, “Man cannot go behind God’s Word”[v] and any alien interpretation is the attempt to go behind God’s Word, for whatever intention.  Going behind God’s Word, such as as in the ‘Jesus Seminar’,  is man judging between word and Word but the very nature of the text of the Bible will not allow it because is it is inspired, all of it (see:  2 Timothy 3: 16).  If man and woman think they have gone behind God’s Word, then they have stood over the Word, interpreting the Word according to their own alien hermenuetics.   It is like Eve in Cranach’s woodcut (above) looking at the serpent become a woman, that is, a reflection of Eve, her own goddess.  If it is the God we imagine, it will always be a reflection of ourselves, and God will always meet us in the place where we would not look  for Him and that place is the Cross  (Bonhoeffer), the tree of Life. Gender feminist interpretation is tragically  no longer God’s Word but man and woman’s ideology, complete with religious trappings, a ‘new’ religion but essentially the false religion of Adam and Eve in which Adam and Eve will be the god and goddess…or the goddess and god.

These two religions are at odds and there are many in the new religion who are still of the old time religion.  The Lord enlists us for the fight (2 Timothy 2: 4) and it is the good fight of faith (cf. 1 Timothy 6: 12), not for ourselves alone but for others as well. St. Paul sitting in prison, looking at his chains, wrote to his fellow pastor, Timothy:

“Remember Jesus Christ, risen from the dead, the offspring of David, as preached in my gospel, for which I am suffering, bound with chains as a criminal. But the word of God is not bound! (2 Timothy 2: 8-9)

No one can bind the Word of God: not by alien ideologues, not by the ‘brilliance’ of million doctors of theology…not by the subtle serpent.  We need to hear this Word more than ever.  Paul encouraged Timothy to remain steadfast, as steadfast as Ruth was to the God of Israel and to Naomi, as Mary at the feet of Jesus, might we be also:

Almighty God, grant to Your church Your Holy Spirit and the wisdom which comes down from heaven, that Your Word may not be bound, but have free course and be preached to the joy and edifying of Christ’s holy people. In steadfast faith, we may serve You and in the confession of Your name, abide to the end through Jesus Christ our Lord. Amen.