Whenever there’s a mass tragedy in the news–a building collapse or a mass murder, for instance—it’s become customary in our society to get opinions and comments from various high-profile individuals, celebrities or influential public figures. That’s what happens in our culture now, and it’s also what we see going on in Jesus’ time. In the Gospel reading for today, from Luke 13, some people ask Jesus for his views on a great tragedy that has just taken place, the mass murder of some Galileans at the temple in Jerusalem. They were slain, cut down, by Pilate’s soldiers. “So, Jesus, what is your take on this terrible tragedy? You’re a Galilean yourself. You must have some comment.” He does. But it’s not what the people who ask him are expecting. In fact, it’s not what we are expecting. “Jesus’ Take on Mass Tragedies”? “Repent or Perish.”

Let’s back up for a moment and set the scene. Apparently, some Jews from the region of Galilee had gone to Jerusalem recently to offer up sacrifices at the temple. Nothing unusual about that. Happens all the time. But on this occasion Pontius Pilate, the Roman governor, sent in his soldiers to the temple grounds, and they killed a bunch of those Galileans, struck them down, shed their blood. A terrible mass murder. We’re not told why Pilate did this–maybe he suspected them of being insurrectionists or something. The Romans didn’t mess around. But in any case, it was a bloody mass murder.

So some people tell Jesus about this. They figure he would be interested in this news, if he hasn’t heard it already. And it seems they want to get his take on the matter. Jesus is a high-profile individual by this point, and he is known to be rather outspoken. He often says controversial stuff.

But the first thing Jesus says in his answer tells us something about the people asking him the question. He says, “Do you think that these Galileans were worse sinners than all the other Galileans, because they suffered in this way?” Now that may strike us as odd. The people asking Jesus the question apparently thought the victims of this mass murder somehow must have been worse sinners, because they suffered such an awful fate. In other words, if this sort of a bad thing happened to them, it must be because they were especially bad people.

That was a view that was going around in that culture, in that day. Think of Job’s friends, who thought that Job must have done something really bad, for him to be suffering like he was. Or think of the man born blind. Jesus’ own disciples asked him, “Who sinned, this man or his parents, that he was afflicted with this blindness?” Bad things happen to bad people–that was the idea.

But Jesus disagrees with that notion. “No, I tell you,” he says. “Those Galileans who were killed, it was not because they were worse sinners.” So Jesus isn’t buying the idea that because people die in a particularly violent or tragic way, that therefore they must have deserved it, that they were worse sinners. But at the same time, Jesus also is not saying that because people are innocent victims of terrible tragedies, that therefore they must automatically be in heaven, that they must have been pure and innocent before God. He isn’t saying that, either. And it is that notion that is the most prevalent in our society today.

I’ll give you a couple examples. After 9/11, in which 3,000 people were killed in a terrorist attack, at the interfaith prayer service that was held later at Yankee Stadium, Oprah Winfrey, the high priestess of American civil religion, declared: “You know, I believe that when you lose a loved one, you gain an angel whose name you know.” And she assured the crowd that all of the thousands of victims were now, to use her words, “angels added to the spiritual roster.” Well, no, Oprah, that just ain’t so. Being an innocent victim of a terrible tragedy does not give you an automatic ticket to heaven. You are giving people false hope there.

Likewise, after the Newtown shooting in December, in which 20 children and six adults were killed–a heartbreaking, horrible tragedy, full of grief–there was one of those interfaith prayer services held there, too. And, unfortunately, the same message of universal salvation apart from Christ was conveyed there, also. One of the clergy, a Monsignor Weiss, said: “We bring to you 20 new stars in the heavens, 20 new saints, 20 new angels.” Again, no, that just is not so. Innocent victims, yes. Automatically saved therefore, no. Monsignor, you are giving people false hope. You are misleading them.

So that’s the heresy of our day. The error back in Jesus’ day was to assume that victims of tragedies must have had it coming, that they must have been worse sinners than the rest of us. And Jesus says no to that.

“Unless you repent, you will all likewise perish.” This is not what we would expect mild, gentle Jesus to say in the wake of these terrible tragedies. “Repent or perish”? This is not what we like to hear. But it’s not like Jesus is being cold and heartless. Indeed, just the opposite. Jesus here is giving us a wake-up call, which is actually a good thing.

Jesus is taking these examples of sudden, unexpected death, and he’s using them to call our attention to matters of our own life and death. You–are you ready for death? These examples should tell you that death could come at any time.

The suddenness and nearness of death, which could strike unexpectedly, at any time–this should be a wake-up call to all of us. Don’t get caught up in whether those people killed in this or that tragedy were worse sinners–or conversely, that they all must now be angels in heaven. That is not what Jesus is driving at. He is stressing the urgency of our own repentance. He’s warning us that there is judgment coming, something worse than being cut down by Pilate’s soldiers or having a tower fall on you. Are you ready for that? If not, you will perish.

Now the fact that Jesus is telling us this, that he’s alerting us to our need and calling us to repentance–this is a good thing. It is part of his grace that he does so. We need to know that we need help, that we need rescuing.

And Jesus is just the man to do that rescuing. That is why he came. That’s why he continues to come to us and call us to repentance. So that we might be saved and not perish! God’s will is to save. You heard it in Ezekiel: “As I live, declares the Lord GOD, I have no pleasure in the death of the wicked, but that the wicked turn from his way and live.” In 2 Peter, it says: “The Lord is patient toward you, not wishing that any should perish, but that all should reach repentance.” And of course, John 3:16: “For God so loved the world, that he gave his only Son, that whoever believes in him should not perish but have eternal life.” God does not want you to perish! God wants you to have eternal life, and this life is in his Son, our Lord and Savior Jesus Christ. 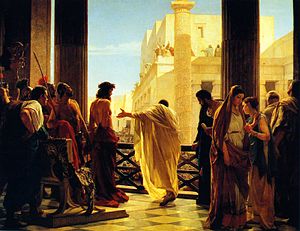 In the slaughter at the temple mentioned in our text, Pontius Pilate mingled the blood of the Galileans with their sacrifices. But there was one more Galilean whose blood Pilate would shed, and that would be this man, Jesus of Nazareth. His blood, Christ’s blood, is the sacrifice! It is the one supreme sacrifice to end all sacrifices. For his is the blood of the holy Son of God, shed on our behalf, that cleanses us from all our sin. His blood has universal effectiveness: It covers the sins of the whole world.

And now God is calling us and all men everywhere to repent and believe in Christ. Trust in him alone, not in any gods of your own making. Christ alone is your righteousness, your salvation, your one and only reliable “ticket to heaven.” In him, through faith in him, you do have everlasting life. You can count on him.

Thank God that he does call us to repent and to put our trust in Christ, so that we will not perish but instead be saved! Christ Jesus is our one hope in the midst of all tragedy and loss. Christ Jesus is our one sure and lasting comfort, who will carry us through this vale of tears and bring us to himself. He will wipe away every tear from our eyes and give us a joy that lasts forever.