And John’s father, Zechariah, has a song to sing about this, a song of praise to God for the birth of his son. This poetic piece is called the “Benedictus,” “Benedictus” being the Latin word for “Blessed,” which is how the canticle begins: “Blessed be the Lord God of Israel,” etc. Today we want to find out why Zechariah is praising the Lord God of Israel so, what his song is saying, and how Zechariah’s song can be our song, too.

First, though, let’s back up a bit. Who is this guy Zechariah, and what’s the big deal about his being the father of John? Well, this fellow Zechariah was a priest serving in the temple in Jerusalem. One day he was in there, doing his priest thing, when all of a sudden an angel appears to him. “Whoa! This is different!” thinks Zechariah. People in the Bible generally are scared a bit when they encounter an angel, so the angel says, “Don’t be afraid, Zechariah. I’ve got some good news for you. You know how you and your wife have always wanted to have a child, and you couldn’t, because she wasn’t able to have kids, and now you two are too old anyway? Well, guess what? Now you can, and you will! It’s going to be a boy, and you’re going to name him John. And God’s going to have a special assignment for him.” The angel continues and tells Zechariah more about what God’s calling will be on his son John’s life: “He will be filled with the Holy Spirit, even from his mother’s womb. And he will turn many of the children of Israel to the Lord their God, and he will go before him in the spirit and power of Elijah, to turn the hearts of the fathers to the children, and the disobedient to the wisdom of the just, to make ready for the Lord a people prepared.”

Now this is a tall order for a little baby who hasn’t even been born yet. Zechariah is having a little trouble taking all this in. Well, to be honest, he even doubts the angel’s words. And so the angel, whose name is Gabriel, tells Zechariah he’s going to be unable to speak for a while, until the child is born. Which is what happens.

Now we fast-forward nine months, and John indeed is born. God’s word to Zechariah has been fulfilled. And now Zechariah’s mouth is opened, his tongue is loosed, and he begins to praise God with this song we call the Benedictus. Zechariah has not been able to speak for nine months, but now he’s got a mouthful to say, and it’s all good. Zechariah is filled with the Holy Spirit, and he prophesies about what the birth of this child John means.

But the first half of the Benedictus does not deal with John per se. Instead, it deals with the broader picture, with God’s overall plan. Zechariah starts out like this: “Blessed be the Lord God of Israel, for he has visited and redeemed his people.” Well, that’s good. When the Lord “visits” his people, that means he comes down and gets personally involved in their welfare. And when he “redeems” his people, that means he takes action to set them free. That the Lord has visited and redeemed his people is certainly something to praise God for.

Can we say that, too, what Zechariah said, that God has visited and redeemed us? Yes, I believe we can. As we shall see.

Zechariah continues: “and has raised up a horn of salvation for us in the house of his servant David, as he spoke by the mouth of his holy prophets from of old, that we should be saved from our enemies and from the hand of all who hate us.” A “horn” of salvation is a very biblical way to talk. The horn was a symbol of strength, like a ram’s horn–although our Rams, the football team with the horn on the helmet, don’t always seem so powerful. But a horn of salvation, as here, would be a very powerful instrument that the Lord has raised up to come to the rescue of his people. 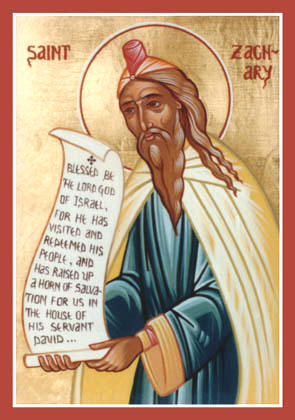 And Zechariah says that the Lord has raised up such a horn now “in the house of his servant David.” The house of David was the royal line of that old king, the line from which Israel’s kings were to come, as prophesied so long ago. That royal line had been dormant for some centuries now. No Davidic king had actively reigned in Israel for hundreds of years. But the genealogical line was still producing descendants from the house of David–plenty of descendants, just no kings coming up. But now Zechariah, inspired by the Holy Spirit, says that has changed now. He can’t be referring to his own son, John. Since Zechariah was a priest, that means he was from the tribe of Levi, not the tribe of Judah, from which the royal house of David came. But somehow Zechariah is connecting the birth of his son John with the arrival of the great Davidic king, prophesied to be the Messiah who would be that mighty horn of salvation. What’s the connection? Well, after the birth of John, about six months later, there would be another baby boy born, and that one would be from the house of David.

Zechariah continues: “to show the mercy promised to our fathers and to remember his holy covenant, the oath that he swore to our father Abraham, to grant us that we, being delivered from the hand of our enemies, might serve him without fear, in holiness and righteousness before him all our days.” Zechariah moves from the prophecy about David to God’s promise to Abraham. Abraham came first, of course. The whole nation of Israel descends from him. The Lord God had made a covenant with Abraham. This covenant was a solemn promise God made when he chose Abraham and promised to make of him a great nation. The Lord promised to bless Abraham and to make him a blessing. And the Lord told Abraham that in him–that is, in his seed, in his offspring–all the nations of the earth would be blessed. And now that promise is coming to fruition. Again, not in the birth of John himself, but insofar as John would prepare the way of the one coming after him, the next baby to be born, Jesus.

He says: “And you, child, will be called the prophet of the Most High; for you will go before the Lord to prepare his ways, to give knowledge of salvation to his people in the forgiveness of their sins, because of the tender mercy of our God, whereby the sunrise shall visit us from on high to give light to those who sit in darkness and in the shadow of death, to guide our feet into the way of peace.”

Parents may have certain hopes and dreams for their children when they are born, that they would grow up to do this or that, to take up a certain profession, to take over the family business, etc. But in baby John’s case, father Zechariah had already received from the Lord a specific job description that his son would carry out. And what a special job it is! To be the forerunner of the Lord. To go before him to prepare his way. This is exactly what the adult John the Baptist would do. He came preaching salvation and the forgiveness of sins. He brought the tender mercy of God to his people by pointing people to the one coming after him, the Messiah, Jesus Christ. Christ himself is the one bringing light into our darkness, the light that dispels the shadow of death.

What is that darkness, that deep dark shadow? It is the darkness of sin and death–the deadly, willful ignorance that we sinners have according to our fallen nature, that we do not know God aright or do his will as we ought. And that’s where we would be stuck, were it not for the coming of Christ, whose way John prepared and whose arrival John announced.

But now Christ has come, and with him all of these wonderful things spoken of by Zechariah in the Benedictus, all the things John the Baptist heralded–all these have come to us in the person of Christ: redemption, salvation, the forgiveness of sins, the tender mercy of our God, the light that conquers darkness and death, and our feet being guided in the way of peace. What a marvelous treasure trove of blessing and God’s gifts are packed into this Benedictus! Zechariah foresaw it and sang about it, through the inspiration of the Holy Spirit, who revealed this to him. Baby John grew up and carried out his mission, to set the stage for the coming of the Christ.

And Jesus of course fulfilled it. He has redeemed us with his holy precious blood, setting us free from our bondage to sin and death. In him we have redemption, the forgiveness of our sins. God has had mercy upon us and has given his only Son to die for us and for his sake forgives us all our sins. We have the light of the knowledge of God shining in our hearts, the Holy Spirit giving us the gift of faith through the preaching of the gospel. This is the light that dispels our darkness. This is the light of life that conquers death. Jesus Christ, risen from the dead–Jesus Christ is the light of the world, the light no darkness can overcome.

So can we join Zechariah in singing his song of salvation, the blessed Benedictus? Oh yes. You don’t have to have a son named John to do that. You just have to know the one whose way John prepared, namely, our Lord and Savior Jesus Christ. In him, through faith in Christ, we can and we do sing, with great joy: “Blessed be the Lord God of Israel, for he has visited and redeemed his people.”