What day is it? It is . . . today. And since it is today, that means that this is the most important day for you to hear God’s voice. To hear his voice means to receive it and respond to it in repentance and faith. And this morning we will look at a couple of examples of those who had the voice of God speaking to them, but they did not repent or believe. One was a nation that fell in the wilderness. The other was a man who went away sorrowful. My prayer for you, though, is that you will hear–really hear, and take to heart–what God is saying to you today, so that you will go away from here rejoicing. That will happen, by God’s grace, “Today, If You Hear His Voice.” Our Epistle reading from Hebrews, quoting from Psalm 95, states this theme: “Today, if you hear his voice, do not harden your hearts as in the rebellion.” The rebellion being referred to is the rebellion the Israelites committed long ago in the wilderness. Israel was the people of God. The Lord had been gracious to them. He had brought them out of slavery in Egypt and led them out under Moses, to head to the Promised Land. The Lord God spoke to Israel, through Moses, giving them–literally–words to live by. And yet Israel rebelled. They rebelled against the Lord and against his servant Moses. They grumbled and complained. This was symptomatic of their disobedience and unbelief. When they heard the voice of the Lord, they did not receive it and respond in repentance and faith. And so most of that generation fell in the wilderness. They did not make it into the Promised Land.

In this way, the rebellion of Israel serves as a negative example for the church, to which we should take heed, lest we fall also. That’s the point the writer to the Hebrews is making when he says, “Take care, brothers, lest there be in any of you an evil, unbelieving heart, leading you to fall away from the living God.” To prevent that, we exhort one another, we admonish one another, we encourage one another, to keep on in the way of faith: “But exhort one another every day, as long as it is called ‘today,’ that none of you may be hardened by the deceitfulness of sin. For we have come to share in Christ, if indeed we hold our original confidence firm to the end.”

How will we hold our confidence in Christ firm to the end? By hearing God’s voice today. Every day it is called “today” we are called to hear and receive and respond to the voice of the Lord. To respond in repentance and in faith. How is God calling you today?

We find a story of someone who heard the voice of the Lord speaking directly to him, and yet did not respond in repentant faith–we find that story in today’s Gospel, the story of the rich young man. This man runs up to Jesus and kneels before him–maybe that’s how we can tell he was a young man, he can still run and kneel–and he asks Jesus, “Good Teacher, what must I do to inherit eternal life?” Well, that’s a good question. Would that more people were that interested in their eternal future! This man at least has some concern about eternal life and wants to find out how he can get it. Apparently, he’s got a gnawing feeling that something ain’t right; he’s not sure if he’s done enough to gain eternal life. But he figures Jesus is the hot young rabbi everybody is talking about, so maybe he might have the answer.

But there’s a misconception lurking in his question. A couple misconceptions, actually. First of all, he addresses Jesus as “Good Teacher,” as though he’s just another rabbi–maybe a really good rabbi, an insightful rabbi, but that’s it. He doesn’t realize that Jesus is, in fact, the very Son of God come in the flesh. So Jesus wants to get him thinking about that. He says, “Why do you call me good? No one is good except God alone.” In other words: “You aren’t going to inherit eternal life just by finding out the latest secret formula from the latest hotshot teacher. Only God can provide you with what you need for that. And guess what? You’re looking at him.” Well, that’s what Jesus wants the young man to discover.

And then Jesus gets to the question itself and to the other misconception it contains. The young man asked, “What must I do to inherit eternal life?” Well, if you think it’s something you can gain by doing, here’s what you will have to do. Jesus tells him: “You know the commandments: ‘Do not murder, Do not commit adultery, Do not steal, Do not bear false witness, Do not defraud, Honor your father and mother.’” In other words, if you want to gain eternal life on the basis of your works, then how do you stack up against God’s Law, the Ten Commandments? And we’ll start with the second table, the ones about loving your neighbor. What do you think? Have you kept those well enough?”

Without batting an eye, the young man answers, “Teacher, all these I have kept from my youth.” Hey, guy, not so fast! Do you really think you have kept those commandments well enough to gain eternal life? If you do, then you have not taken those commandments–and your breaking of them–seriously enough. Jesus would say that to you and me, as well as to the young man in the story.

Do you really think you have kept God’s commandments well enough? Remember, the score needed for eternal life is 100%. Perfect. God does not grade on a curve. So maybe think a little more deeply. Take a look in the mirror of God’s law.

“Honor your father and mother.” Did you always obey your parents? Did you do what they told you without grumbling or complaining? What about other authorities God has placed over you for your good? Government authorities. The pastors of your church. “Hmm. . . .”

“Do not murder.” “OK, there I score pretty good!” Alright, so you haven’t killed anybody, literally. But what about hurting or harming your neighbor in his body? What about tearing him down with your words? Hating him or her with your thoughts? In the Sermon on the Mount, Jesus says those things qualify as murder, too. “Well, rats!”

Next: “Do not commit adultery.” Let’s see. Divorce? You fail. Shacking up outside of marriage? Fail. Lustful thoughts? Fail again. “Boy, this is getting frustrating!”

Yeah, that’s the point. You fail the test. I fail the test. This young man failed the test, even though he didn’t think so. That’s why Jesus asked him about his keeping of the commandments. Jesus wants him–and us–to realize our sin, to come to grips with our lack of righteousness, and thus the realization that we cannot gain eternal life on our own. Only then will we be ready to receive the righteousness that God freely gives us. 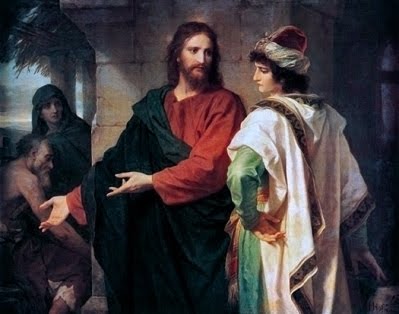 One more try. The young man thinks he scores well on the second table of the Law. Let’s see how he does on the first table, about loving God above all things. Are there any idols, false gods, in this man’s life? There are. And Jesus puts his finger on it. Jesus looks at this young man–and loves him, it says–and he says to him: “You lack one thing: go, sell all that you have and give to the poor, and you will have treasure in heaven; and come, follow me.”

Now it’s not that somehow you can earn your way into heaven by taking up a vow of poverty and helping the poor. That’s not why Jesus says this. Rather, Jesus again is wanting the young man to see how he has not kept the commandments. And the big one, the first commandment is, “You shall have no other gods before me.” And this man did. It was his money. The rich young man’s wealth ultimately was his god, that which he loved and trusted in more than the Lord God himself. Jesus cuts right to the heart of the matter.

You see, the nature of our sin is that we all set up other gods, other than the one true God. It could be money. For another person, it could be pleasure. Ultimately, when you come down to it, the one idol we all have in common is the god of self. I want to be my own god, serve my own desires, make my own decisions about right and wrong–even earn my own salvation, based on my own goodness, rather than receiving it purely as a gift.

But Jesus is looking at you, my friend, and he loves you, just as he loved that young man. He wants you to come to grips with your own need and to sense it. Jesus is calling you to cast every idol from its throne, whether that be wealth or pleasure or whatever it is.

Not that you earn salvation thereby. No. The salvation comes in the next part of Jesus’ call. It’s when he tells the young man, “and come, follow me.”

“Follow me!” There it is! There is the salvation! There is the eternal life! In Christ. Following Jesus in faith is the only way we find it. For only in Christ is there righteousness enough to pass God’s test. More than enough. Jesus kept God’s commandments, perfectly. He loved his heavenly Father and came to do his will. He loved his neighbor even more than he loved himself. Jesus laid down his life for you and me, and for the rich young man, that’s how great his love is. Jesus paid the price for all our sins, the sins of the whole world, because the blood he shed on the cross for us is that of the one and only Son of God. That is more than enough to do the job. And so when Jesus rises from the grave, victorious over sin and death and hell, he sends out his messengers to tell you: “What must you do to inherit eternal life? Nothing, really. You see, it’s nothing you do. It’s what Jesus does for you. Trust in him. Listen to his voice when he calls you, saying, ‘Come follow me.’”

The rich young man was disheartened by that saying, and, it says, “he went away sorrowful, for he had great possessions.” Those things were his idol, and he could not give them up. How about you? Jesus is calling you today. Do you hear his voice? Today, if you hear his voice, harden not your heart. Instead, today, receive Jesus’ call in true repentance and firm faith. And you will leave this place today, not going away sorrowful, but rather following Jesus, rejoicing.