The Luther Academy goes to Indonesia
By Pastor Charles Henrickson

On March 8, Luther Academy Executive Director Daniel Preus and I boarded a plane and flew–and flew and flew–halfway around the world to Indonesia, from St. Louis to Minneapolis to Tokyo to Singapore to the city of Medan. We went there to put on a five-day Luther Academy conference, March 12-16, for a group of Lutheran pastors, on the topic of “The Two Kingdoms.”

First, a little about our destination: Indonesia is the fourth-largest nation on earth, with a population of about 240 million. Over 80% of the people are Muslim, making it the nation with the largest Muslim population. The country consists of a long string of islands, straddling the equator, stretching from near Malaysia over to the Philippines and down toward Australia. The city of Medan is situated on the island of Sumatra, and the city has a population of over two million (four million in the metro). The temperature forecast for Medan is about the same every day of the year: high of 90, low of 75, with a 60% chance of rain. Selamat Dating di Medan! “Welcome to Medan!” 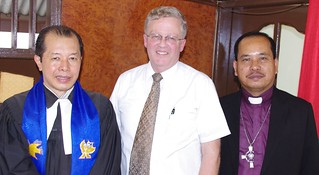 Our host in Indonesia was the Rev. Aladin Sitio, bishop of the Gereja Kristen Luther Indonesia (GKLI, the Indonesian Christian Lutheran Church). On Sunday, he took us to a church service in Medan. Two hours! And no one complained. The people love to sing. I was able to figure out a few Indonesian words and phrases, for example, Tuhan, “Lord,” and Bapa dan Anak dan Roh Kudus, “the Father and the Son and the Holy Spirit” (note similarity of Indonesian Roh Kudus to Hebrew Ruach ha-Kodesh). The Christians do use Allah for “God,” but obviously they do not mean the false God of Islam. After the service, Pastor Preus and I were greeted by everyone with a warm Horas, a traditional Batak word of greeting in which the handshake is followed by putting one’s hand on one’s heart, the idea being, “I have you in my heart.” It was a beautiful welcome. 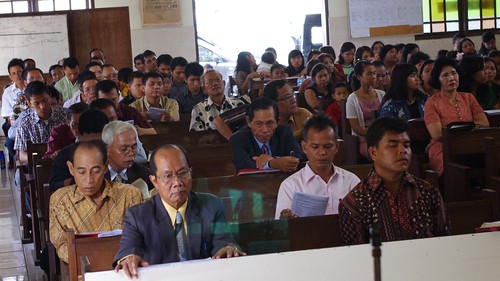 On Monday afternoon the conference began. We met at the Hotel Grand Antares in Medan. There were about 60 pastors in attendance. The topic on which I lectured–with the assistance of an able translator–was “The Two Kingdoms: The Proper Distinction of Church and State.” We had more than twenty hours of sessions over the course of the week (plus Matins and Vespers), so we were able to cover the topic in depth. 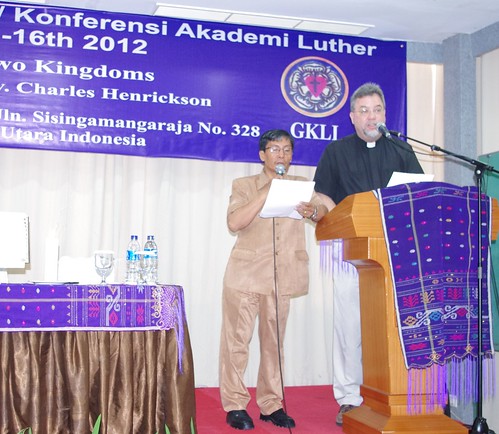 We started with the distinction of Law and Gospel, since that is the basis for the distinction of how God rules in his two “kingdoms” (or “governments”), Church and State. The “first use” of the Law, written on human hearts, is how God keeps order in the world, especially through civil government. The Gospel is the special ministry of the Church, by which God saves sinners for Christ’s sake for eternal life. Law and Gospel, Church and State–these need to properly distinguished and not confused, so that each can do its necessary job. 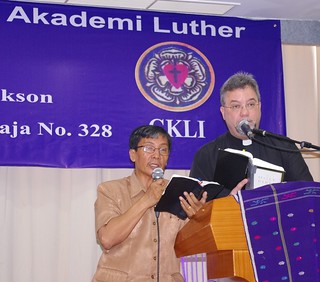 The seminal work by Luther on the topic of the Two Kingdoms is his 1523 treatise, “Temporal Authority: To What Extent It Should Be Obeyed” (Luther’s Works, Volume 45). All subsequent Lutheran teaching on this topic stems from this essay. I led the group through this treatise, which was also a good way of getting at the key Bible passages, which Luther handles.

Next we went through the pertinent portions of the Lutheran Confessions, especially the following. From the Augsburg Confession: Articles IV, V, and VII, on Justification, the Ministry, and the Church; Article XVI, on Civil Government; and Article XXVIII, on Church Authority. Likewise, from the Apology: Article XVI, on Political Order. And from the Small and Large Catechisms: the Fourth Commandment and the Table of Duties. 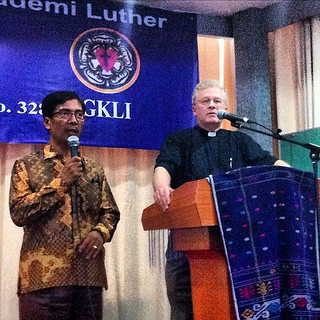 Then we went through other biblical and historical examples of how the two kingdoms operate and how they often have been confused. From the Imperial Cult of Rome to Constantinian Christendom to the Medieval Crusades, from the Protestant Reformation to the Prussian Union to issues of Church and State today, history bears witness to the importance of keeping the two kingdoms in their proper perspective.

We provided plenty of time for contemporary application and discussion, and the conference attendees engaged the subject matter and actively participated. Particularly in a land like Indonesia, dominated as it is by Islam in society and politics, the biblical doctrine of the Two Kingdoms is highly relevant. 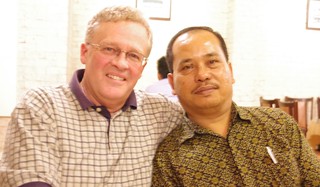 Beyond the subject matter itself, the conference was valuable for building relationships among the Indonesian pastors and they with their Lutheran brothers from overseas. I see that as a great benefit of these Luther Academy conferences: promoting confessional Lutheranism both by teaching sound doctrine and by building relationships among Lutherans around the world. I’m deeply impressed at the excellent work Daniel Preus has done in advancing these aims.

The pastors in Indonesia were most appreciative to the Luther Academy for sponsoring this conference. I myself would like to thank Executive Director Preus for inviting me to teach and for coming along with me. I want to thank my two congregations, St. Matthew in Bonne Terre and Redeemer in Potosi (both in Missouri), for granting me the time to go to Indonesia (during Lent, no less!). And I thank all those who support the work of the Luther Academy for making this trip possible. Above all, thanks be to God for bringing us into the kingdom of his Son, our Savior Jesus Christ! 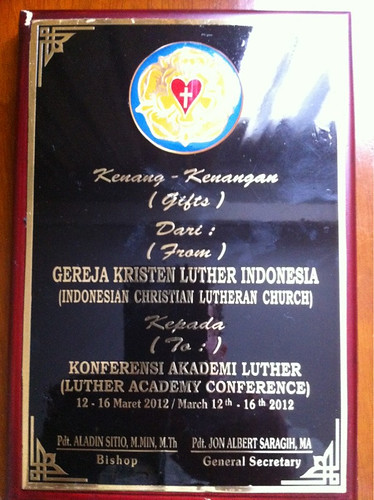 For those of you in the St. Louis area, I will be giving a report on my trip to Indonesia, with more photos, after our Ascension Day service (during our ice cream social) at St. Matthew-Bonne Terre on Thursday, May 17:

Ascension, Ice Cream, and Indonesia, at Bonne Terre, May 17: All are invited to an Ascension Day Festival Service, on Ascension Day, Thursday, May 17, at 7:00 p.m., at St. Matthew Lutheran Church, 340 Summit St., Bonne Terre, MO 63628. Then stay after the service for an ice cream social (with homemade ice cream) and Pastor Henrickson’s report on his trip to Indonesia (with photos).