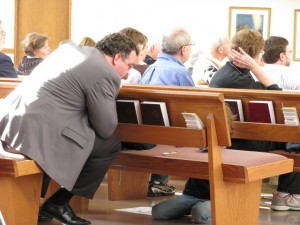 Since BJS is dedicated to helping restore fatherhood, I thought I would share a moment from the BJS Conference this past weekend.  While attending the first lecture on Witness, my wife and children accompanied me into the sanctuary of Bethany in Naperville (our family vacation time was originally around Symposia week, but chicken pox stopped that from happening, so BJS provided a second chance).

The picture in this post is of President Harrison interacting with my oldest daughter, who was reading “The Magician’s Nephew” by C.S. Lewis and also spending time being artistic with the BJS place mats from the morning breakfast.  What this picture doesn’t show is that just minutes later my youngest daughter was struggling to keep quiet and was getting very tired of her dad’s efforts to keep her under the acceptable volume for a presentation.  All of my efforts to distract her to do something else were not working, and she was beginning to raise a bit a of a ruckus.   President Harrison intervened and asked my daughter to come back by him and show him her book “Treasury of stories for four year olds”.  He then interacted with her as she told him all about each of the stories which she has already almost memorized (from some of dad reading, but mostly mom).  My eldest daughter also came back and showed her work and books as well.  President Harrison did a wonderful job with them, and as a father I was thankful to have a moment to hear the presentation and look on as my daughters interacted with the Synodical President no different than they do with any member of the congregation I serve.

As a pastor in the LCMS, it was humbling to see the Synodical President interacting with children at such a time (I am sure he had about a hundred other things that he could have been working on).

Thanks to Norm for capturing the moment.