The Lord richly blessed the work of the now  sainted Robert Preus. Not only did he gather together one of the most incredible seminary faculties the Church has ever witnessed (many of whom are still teaching at Ft. Wayne such as Art Just, Dean Wenthe, David Scaer, etc.) but he also brought us several sons who are a great blessing to the church which is being witnessed at the LCA and ACL conferences this week in the twin cities. 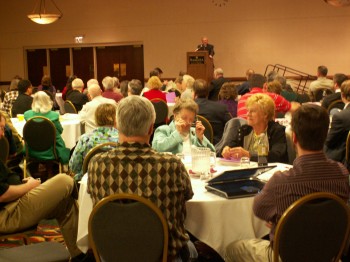 The LCA (Lutheran Concerns Association) wrapped up their conference this morning with an articulate critique of the work of the Blue Ribbon Committee by Robert’s attorney son Christian. His legal skills were on clear display as he carefully and skillfully analyzed the strengths and weaknesses of the commission’s work. Mostly he found weaknesses in the proposals.

Following right on the heals of the LCA conference came the ACL (Association of Confessional Lutherans) conference. It is co-sponsored by the Luther Academy whose head is the Reverend Daniel 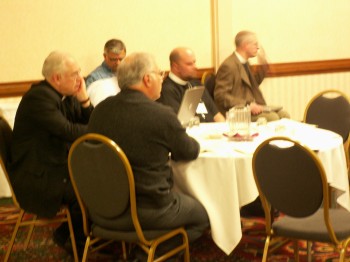 It is a wonderful site to see a hotel conference room filled with over 150 pastors and laity commited to the Lutheran Confessions. Take heart Brothers of John the Steadfast, you are not alone.