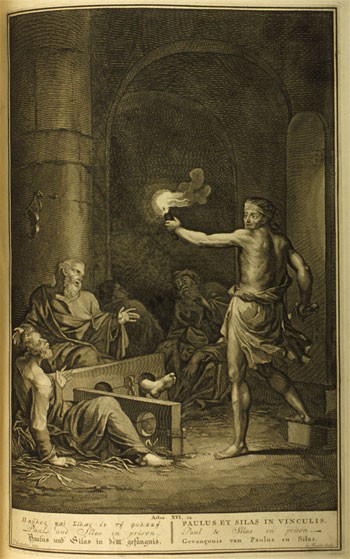 Forty years ago this summer, the first moon landing took place, Apollo 11, and the first man set foot on the moon. Many of you probably remember his name, Neil Armstrong. “One small step,” and all that. There was another man on that trip who was the second man to step on the moon, and some of you may remember his name, too. That’s right, Buzz Aldrin, the #2 guy on the first trip to the moon. But that was the first trip. Later that year there was another trip to the moon, Apollo 12, and even if I gave you the name of the lead astronaut, Pete Conrad, I bet you no one here could come up with the name of the second man. Give up? Alan Bean. Alan Bean was the #2 guy on the second trip. But no one remembers him.

Now the “official” description you get for the Commemoration of Silas, as you find it in the hymnal, is, “Fellow Worker of St. Peter and St. Paul.” “Fellow worker”: Hey, that sounds like all of us! For we are all fellow workers, aren’t we, in one form or another, pastors and laymen alike, in a lead role or a supporting role–all of us, fellow workers in the church’s great mission of spreading the gospel. Silas, then, may have something to say to us today.

What do we know about this man Silas? We first meet him in Acts 15, at the Jerusalem council–the first church convention, if you will. The apostles and the elders hash out this thorny problem about what to do with the Gentiles, and they compose a letter to be sent out, and they send out two men to take it–“leading men among the brothers,” it says, and one of them was Silas. They go with Barnabas and Paul back to Antioch to report the decision. There Silas is referred to as a “prophet,” and it says they “encouraged and strengthened the brothers with many words.”

Well, then Paul and Barnabas have a bit of a falling out, and now Paul needs a new #2 guy to go with him on his second journey. He chooses Silas. There must have been something about Silas that caused both the church at Jerusalem and then the Apostle Paul to choose him for an important, though somewhat unglamorous, task. Perhaps the word is faithfulness, steadfastness. St. Peter said as much about Silas in his epistle, using his Latinized name, Silvanus, and calling him “a faithful brother.”

Faithfulness is tested and strengthened over time. Silas was found faithful in his local church, then he was selected to be an emissary from Jerusalem. He was found faithful in that, at Antioch, and then Paul selected him to be his assistant on the missionary journey. Sometimes Silas worked directly with Paul. Sometimes when Paul traveled elsewhere, he entrusted Silas and Timothy to carry on the work in that place. So Silas spent considerable time in places like Philippi, Thessalonica, and Corinth. Being faithful meant being given increasing responsibility. But it wasn’t about who got top billing or who got the greater glory. Silas, the “faithful brother,” was content just to be a “fellow worker.”

As is humility–humility, the willingness to take the lower part. For that’s what Silas’s Lord did, wasn’t it? He took the lower part. Christ Jesus humbled himself, and became obedient unto death, even death on the cross. “The Son of Man came not to be served, but to serve and to give his life as a ransom for many.” Because Christ has set us free and redeemed us by his holy precious blood, now we are free to take the lower part, to humble ourselves toward one another, even as we humble ourselves before God, knowing we are nothing on our own–we all are beggars, this is true. Everything we are and have comes from God. To him alone goes all the glory. It doesn’t matter who’s in a lead role and who’s in a supporting role. It doesn’t even matter, in one sense–namely, for our salvation–whether we do any work at all. For that, we rely completely on the finished work of the sole worker, Jesus Christ.

Nevertheless, having been freed from our sins and from our self-glorifying efforts and from the fear of the grave, now we are free to serve in this great endeavor of spreading the gospel, in whatever capacity we have open to us. Fellow worker, faithful brother–that’s enough.

So Silas goes with Paul on his second missionary journey, through Syria, Cilicia, Asia Minor, where they pick up Timothy to join the group. Paul gets his Macedonian vision, and now the little missionary band heads over there, to northern Greece. First stop, Philippi. That’s where we pick up our reading from Acts. As is his wont, Paul gets himself in trouble for preaching this Jesus stuff. Paul and Silas get grabbed and beaten and tossed in the clinker. The jailer fastens their feet in the stocks.

Well, now what? Give up? It’s not worth it? Does Silas wonder, “Maybe I should have stayed in Jerusalem”? Does he say to Paul, “This is another fine mess you’ve gotten us into”? I don’t know if any of those thoughts were racing through Silas’s mind–I don’t know what thoughts run through your mind when you encounter trouble or hardship while you’re busy serving in the cause of the gospel. Blame God? “I don’t deserve this, God. I’m doing your work, after all.” There is that temptation in all of us, I suppose. Our sinful flesh will always remain the sinful flesh, blaming God and blaming other people for everything.

But that’s not all of who you are. You are also a man of the Spirit, a new man in Christ. You now know a heavenly Father, who loves you and cares for you in all of your suffering. You call on him in the day of trouble. You rejoice in his salvation in whatever the circumstances. That’s what Silas did. “About midnight Paul and Silas were praying and singing hymns to God,” our text says. And this was while they were chained up in the stocks.

Well, that’s a good time to pray, isn’t it? When you can’t do anything and God has to do everything. That’s a good place to be, actually. We don’t like it, it can be a painful experience, but relying on God to deliver you is a good thing. “Casting all your anxieties on him, because he cares for you.”

And it’s a good time to rejoice, singing hymns to God. Singing in the chains. The joy of our salvation is such that we can do that. “Rejoice and be glad,” our Lord says, “for your reward is great in heaven.” Christ Jesus won that reward for us, totally undeserved, by his death and resurrection. Through him, in him, our place in heaven is sure and secure. What happens in the stocks, or in the stock markets, cannot shake that. Whether you’re being persecuted or prosecuted, whether you’re tied up in chains or just in blue ribbons, your salvation is sure and you have something to sing about. Praying and singing in the stocks. That’s a good place to be.

But God wasn’t done with Paul and Silas yet, so he sent some good shaking to get them out of those shackles. More preaching to do. “Believe in the Lord Jesus, and you will be saved.” That’s the same message we preach, faith in the Lord Jesus, the message by which our hearers are saved. It’s the same message we ourselves believe, and by which we are saved. Our Savior, the Lord Jesus Christ, who saves us from our sins, saves us from ourselves, saves us from eternal death. And he is the Savior of the whole world, the only one there is, and the church brings this message of salvation to the world in his name.

So Paul and Silas had more preaching to do. More baptizing to do, a jailer and his household. More towns to go to. “And when they had seen the brothers, they encouraged them and departed.”

Silas “encouraged and strengthened the brothers with many words.” That’s what he’s been doing here today, too. What God did through Silas encourages and strengthens us to be willing to take the lower part, to take a humble role, even when that means being “the second second banana,” the one that no one remembers. What God did through Silas also encourages and strengthens us when we find ourselves facing trouble and hardship, that those are times to pray and to sing, casting our cares on God and rejoicing in our salvation. God’s grace in Christ is such that he is making many Brothers of Silas the Steadfast: Fellow workers, faithful brothers, praying and singing in the stocks.