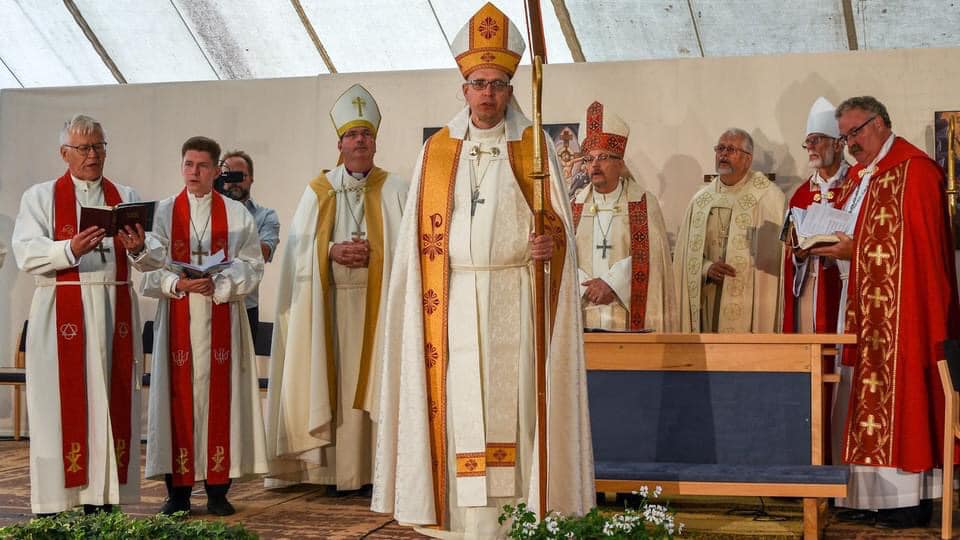 Editor’s Note: Rev. Lange has asked me to publish this piece, which is a response to my article that reported of the consecration of the Finnish Bishop and my questions of the participation in consecration and communing alongside bishops of church bodies we are not in fellowship with. I offer it as it was sent to me as an honest, good, and helpful part of a conversation that official Synod appears to not want to have.

Recently, LCMS President Matthew Harrison participated in the consecration of Juhana Pohjola, Bishop of The Evangelical Lutheran Mission Diocese of Finland (ELMDF). This service, which took place at Loimma, Finland on August 1, 2021, included the sacrament of Holy Communion. Participation in both aspects of the service was in keeping with the full altar and pulpit fellowship that the LCMS recognizes with ELMDF.

An article titled, “LCMS President participates in consecration service of new Finnish bishop alongside church leaders we are not in fellowship with” was posted on August 19 at the Steadfast Lutherans website. Rev. Joshua Scheer raised questions about two church bodies, represented by their respective bishops, that seem problematic. The ELMDF is in full altar and pulpit fellowship with both the Mission Province of Sweden (MPS) and the Evangelical-Lutheran Diocese of Norway (ELDN). The LCMS, however, is not. Thus, a fellowship dynamic, characterized as “triangular” fellowship, occurred at the consecration service. These public questions demand a public answer.

The article centered on an explanatory email from Harrison to LCMS officials and District Presidents. It begins by noting how the LCMS came to recognize altar and pulpit fellowship with the ELMDF. It relates how the Finnish Lutherans, and Bishop Pohjola’s family in particular, have undergone persecution at the hands of the government. Then, after a brief discussion of the MPS and ELDN, it concludes with six details providing specific context.

The author seems to justify this characterization largely by the sixth detail in Harrison’s email. This noted that the consecration service was “a rare circumstance.” For Scheer, that phrase raises the specter of Yankee Stadium and similar unionistic events that have been defended as “once in a lifetime” exceptions. Worse, it is seen as an escalation. “Once in a lifetime,” at least claims that it will not be repeated in this generation. “Rare,” on the other hand, opens the door to still other “exceptions.”

Based on this interpretation, Scheer inquires whether a “’once in a lifetime’ exception” is sufficient excuse to set aside “the doctrine of fellowship.” Similarly, he asks if, “persecution mean[s] that we loosen doctrine and practice,” or “lower our standards?”

Thus construed, the answers are clear. Fellowship questions neither hinge on the magnitude of the occasion, nor on the rarity of the occurrence. Tragedies—ranging from natural disasters to mass murders to government persecution—are illegitimate reasons for altering the principles of church fellowship. Repeated claims that some such reason will never again arise is reminiscent of the provisional apology of a serial abuser. On this all should agree.

However, there is scant evidence in Harrison’s email that these questions fairly characterize his point. The mere mention of persecution directed at the ELMDF does not imply that this drove Harrison’s decision. The human compassion (splanchna) that it evokes could, just as well, be a reason to consider the situation more carefully. Likewise, mention of the rarity of the occasion need not imply the relaxation of standards, but rather, a more stringent application of doctrine. Unless the president contradicts the latter interpretation, we should “put the best construction on” his words.

In a third, more extensive, discussion the author observes that the LCMS President has authority to “declare provisional fellowship with smaller, emerging Lutheran church bodies.” But he finds fault that, prior to the service in question, Harrison made no such declaration concerning either the Mission Province of Sweden or the Evangelical-Lutheran Diocese of Norway. He asks, “what prevented that from occurring prior to this event?” and likened to fornication his communing with these bishops without a prior declaration.

It is not a new question. This assertion (often unspoken) haunted the Synodical Conference for almost a century. Sadly, however, it was rarely dealt with up front. Still today, it remains an unspoken assumption fomenting confusion, suspicion, and division.

Let us speak plainly. If church fellowship is properly a fellowship between individuals, all of Pastor Scheer’s questions are valid and urgent. Moreover, if fellowship is so construed, every individual communicant who communes at any altar would be required by God to abide by the same canons of fellowship. Faithfulness to one’s Lord would require personal investigation of the individual orthodoxy of every other communicant participating in the Divine Service. This may even extend to an investigation of that congregation’s membership rolls.

This personal responsibility can only be attenuated if there is biblical warrant to discriminate between different types of communicants. Burdening the conscience of presidents, bishops, clergy or rostered workers while exempting others needs more than the vague, much-given-much-required justification of Luke 12:48.

If, on the other hand, church fellowship is properly recognized between altars and not between individuals, President Harrison’s actions in Finland are not only permissible, they are the only faithful response to the situation. Far from “setting aside the doctrine of fellowship,” he precisely lived it. Hence, before either criticizing or approving Harrison’s participation, every churchman must choose a side in this debate—and fully embrace all the consequences that follow.

To get this debate started, I will make three brief points in defense of the proposition that church fellowship is properly understood corporately, and not individualistically. For a more academic approach, one may consult “Fellowship in Its Necessary Context: The Doctrine of the Church and the Overseas Theses of 1961,” (CTQ 84:1-2).

First, let us lay to rest an obvious objection. What about a bishop that regularly refuses to guard the altar from unbelievers, heretics, and unrepentant false teachers? Wouldn’t faithful Christians, in that case, be bound to refrain from communion? Yes, they would. But the word, “regularly” is key. Since church fellowship is based on the faithful confession and practice of the presider (the bishop), the only faithful response to an unfaithful bishop would require the breaking of church fellowship altogether.

However, it should be noted that the breaking of fellowship is a reaction to the bishop and church, per se, based on the regularity of his unfaithful action. It is not based on the error of the individual at his altar. For this reason, faithfulness would require not a momentary abstention only on the singular occasion that the individual in error communes. Rather, it would require a suspension of church fellowship until the bishop’s regular confession and practice is corrected.

By recognizing fellowship on these terms, the LCMS directed its president to live out the reality of this fellowship with the ELMDF openly and immediately—not awaiting some future change. It would have been unfaithful for President Harrison unilaterally to act otherwise. According to this same principle, Bishop Pohjola, practiced fellowship with two churches (ELDN and MPS) with whom it has concluded fellowship discussions while we, ourselves, are still in process.

This clear principle makes it possible for both President Harrison and Bishop Pohjola to perform the duties of their respective offices faithfully in real time. President Harrison would have placed himself under the wrath of God—as St. Peter did—if he had unilaterally refused the hand of fellowship that the Church recognized (Galatians 2:11-14). Further, he would have short-circuited the Church’s authority to conclude fellowship if he had preemptively declared fellowship with the ELDN and the MPS before the full church had spoken.

Likewise, Bishop Pohjola would have placed himself under the wrath of God had he denied an invitation to the bishops of the ELDN and the MPS contrary to the considered and faithful determination of the ELMDF. There is no other possible way to live faithfully in time.

This observation brings us to the third point. The perennial confusion regarding so-called “triangular” fellowship fails to treat time as a creation of God through which He Himself works in the world. When fellowship is construed in instantaneous terms, there is simply no allowance for the human and humanizing element of time to process and react either to a new recognition of fellowship, or to a new recognition that fellowship has been broken.

As Harrison noted in his email, both of these church bodies “clearly reject the ordination of women, confess the teachings of holy scripture on man and woman, and confess the Book of Concord. They are not in the LWF, and [both] have suffered for their confession.” These considerations factored into the LCMS’ recognition of fellowship with the ELMDF. Had they not been true, it is unlikely that we would have entered into fellowship in January 2021.

These same factors offer realistic hope that, in time, fellowship might be recognized between the LCMS and these two bodies (MPS and ELDN). However, other considerations, like the nature of MPS’ ongoing relationship with the state church of Sweden still require further discussion. It would be unfaithful summarily either to rule out any further discussion, or to short-circuit the corrections and clarifications necessary to decide one way or the other.

Time is of the essence. Bodies—including church bodies—are organic, not mechanical. Relationships grow, strengthen and bear fruit in time, just as relationships may wither, weaken, and decay over time. The spoken word makes all the difference. And that word itself is an event in time and through time. This is God’s design, not man’s. And just as the Word itself is a function of time, so also is Spirit-wrought faith. The word, “come,” in the petition, “Thy kingdom come,” is a movement through time.

The spirit of sectarianism is a gnostic spirit that has no time for repentance, forgiveness, and change. It approaches the world with immediacy. In the words of Herman Sasse, “We have been too much influenced by a certain type of sectarian Christianity which for a long time flourished in America. The sect cannot wait; it must have everything at once, for it has no future. The church can wait, for it does have a future. We Lutherans should think of that.” The Holy Spirit governs the Church in the fullness of time. Thus, Church fellowship is more organic than mechanical, more like leaven than lightning. It requires God’s own patience and longsuffering.

The three brief points above can only be a beginning. Brevity of time necessarily left much out that still needs to be explored. I welcome challenge and correction. If this essay does nothing more than to cause other churchmen and theologians to consider how church fellowship relates to individual fellowship, I will have accomplished my goal.

4 thoughts on “Participation in the consecration of a Finnish Bishop – guest article by Rev. Jonathan Lange”