The Second Sunday in Advent

“And there will be signs in the sun, in the moon, and in the stars; and on the earth distress of nations, with perplexity, the sea and the waves roaring; men’s hearts failing them from fear and the expectation of those things which are coming on the earth, for the powers of heaven will be shaken.  Then they will see the Son of Man coming in a cloud with power and great glory.  Now when these things begin to happen, look up and lift up your heads, because your redemption draws near.”  Then He spoke to them a parable: “Look at the fig tree, and all the trees.  “When they are already budding, you see and know for yourselves that summer is now near.  So you also, when you see these things happening, know that the kingdom of God is near.  Assuredly, I say to you, this generation will by no means pass away till all things take place.  Heaven and earth will pass away, but My words will by no means pass away.  But take heed to yourselves, lest your hearts be weighed down with carousing, drunkenness, and cares of this life, and that Day come on you unexpectedly.  For it will come as a snare on all those who dwell on the face of the whole earth.  Watch therefore, and pray always that you may be counted worthy to escape all these things that will come to pass, and to stand before the Son of Man.”

That’s too bad.  We should pay attention to Advent.  It’s not just a season of the church year.  It’s a promise and a warning. 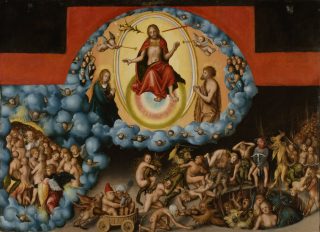 It’s a promise of redemption.  It’s a warning of judgment.  Judgment Day is the day of the Christian’s redemption.  It is the same day.  Just as surely as Christ redeemed us by his blood at his first coming, he will judge the living and the dead at his second coming.  Those who repented of their sins and trusted in their Savior Jesus who bore away all their sin on the cross, washing it away by his blood, will welcome Christ’s second advent as the day of their final redemption.  Those who continued in their sin and rejected God’s grace in Christ will be terrified at Christ’s second advent.  Their hearts will fail for fear.

The powers of heaven will be shaken.  The world that we know will be destroyed.  The orderly universe will fall into disarray.  This will be no natural disaster.  It won’t be a manmade disaster, either.  God will do it.  Just as he destroyed the world by a flood and destroyed Sodom with fire from heaven, he will destroy the world in which we live.

Hearts whose affections are attached to the cares and pleasures of this life will fail from fear.  They thought that this world would last forever.  They thought that if there were ever a reckoning that they must face, they would surely have time to prepare for it.  They were fools.  They didn’t reckon with the fact that they owed their Creator devotion and obedience.  Instead they lived as animals live.  Perhaps not in violence like the wolf bringing down the deer.  Maybe in friendliness as the dog who runs up to be petted.  But they lived as animals, not as men and women created in the image of the holy God.  Jesus describes these people when he warns his Christians not to let their hearts be weighed down with carousing, drunkenness, and the cares of this life.  It’s a description of the person who lives as if God doesn’t exist.

We can call it functional atheism.  It’s not actual atheism because these people don’t deny with their mouths the existence of God as atheists do.  They would not deny that God exists.  But they live as if he doesn’t.  They live to get pleasure and avoid pain.  “Carousing, drunkenness, and the cares of this life” are a summary of those concerns that concern people who are not concerned about God.  They don’t pay attention to what he says.  They don’t know what really matters in life.  They think that their bodily comfort, pleasures, pains, and cares matter the most.  They look around and see what others have that they want to get and what others suffer that they want to avoid.  What God says is all very good, but it goes in one ear and out the other.  They adopt whatever religion the culture is featuring which, while ever-changing, never requires genuine repentance or calls for true faith, but instead advocates some form of moralistic self-righteousness.  The true God of the Holy Scriptures is replaced by the generic one size fits all god who can accommodate himself to anybody’s religious sensibilities.  These are the so called people of faith whose faith is as substantial as the mist before the rising sun.  They pray, but uninformed by God’s word, prayer has become nothing more than talking to oneself.  The God who has been denied by disinterest and neglect is not the One to whom the prayers are addressed.

Then Jesus returns.  It was true after all!  Judgment Day wasn’t a scare tactic to get people to behave.  It was a certainty.  All of this theology that seemed so distant and irrelevant is now so vivid and real, staring us in the eyes.  There was never any doubt about it.  Jesus said so.  That settled it.  The second coming of Christ is as certain as his first.  Just as surely as Jesus came into this world in humility to redeem us all, so surely he will return in glory to judge all those whom he redeemed.  The first advent guarantees the second.  Those who receive Jesus as he comes in humility are ready to receive him when he comes in glory.  Those who don’t are not.

The same event is terror for some and freedom for others.  For some it is terror worse than the most deadly terrorism the world has ever known.  What makes it so very terrifying is that it doesn’t come from evil religious ideologues whose minds have been poisoned by blind hatred.  It comes from the holy God whose righteousness cannot be questioned.  The reason the hearts of sinners will faint from fear is because when they see the universe shaken down to its foundations and the end of all things at hand they will know that they are facing their Judge and they haven’t got a leg to stand on.  They will be overcome by fear because they will know the truth of what they dismissed.  They will know that putting their confidence in the things of this world that perish was not only foolish, but a terrible sin against God.  The destruction of the world will catch them as a snare catches the animal in the woods.  No warning.  He’s running along entirely unconcerned and then he’s trapped.  There is no escape.

That day of terror is coming, but for those who have found their refuge in the wounds of Jesus, it will be a day of joy, not terror.  Week after week we come to church, we hear the gospel, we eat and drink the body and the blood of Jesus, but we cannot get rid of our sins.

The pastor preaches that they are forgiven.  But they’re not gone!  We hear of our redemption, Jesus as our Redeemer, how he shed his blood for us on the cross, how he took away all our sins by dying for them and rising again, and we believe it, but we don’t see the proof of our redemption.

Oh, it’s not as if the Holy Spirit doesn’t do anything in us.  He keeps us from falling away.  He upholds us by his grace and he gives us confidence that the gospel we hear is true.  But there is one thing he doesn’t do.  Not in this life.  He doesn’t purge us entirely of all our sin.  I don’t care how pious you are, how sanctified, how devout – there remains within you that corruption of sin that has held onto the human race since the fall of Adam and Eve.  There’s even a fancy theological term for it: concupiscence.  Concupiscence is the constant inclination toward evil, the sinful desires that lie within us, that will break out into every kind of sin of thought, word, and deed.  Make no mistake about it: concupiscence is sin.  It’s not just the occasion for sin, as if it isn’t sin until we do the deed we want to do.  Wanting what God forbids is a sin against God.  The two commandments about coveting what belongs to our neighbor should make that crystal clear.

So which is it?  Are we sinners or saints?  God tells us our sins are forgiven.  Listen to what St. Paul writes to the Christians in Colossae:

He has delivered us from the power of darkness and conveyed us into the kingdom of the Son of His love,  in whom we have redemption through His blood, the forgiveness of sins.

“He has delivered us,” Paul says.  It’s a present reality.  But sin clings to us like mud to a wheel.  It permeates our thoughts.  It hounds our affections.  It distorts our love.  It pollutes our desires so that we cannot truthfully say that our hearts are perfectly pure.

If only we could be completely delivered from that sin!  If there were nothing but the purity and love of Christ within us.  If all our lust, selfishness, hatred, and distrust were fully and finally removed so that we would enjoy the vision of God with pure hearts.  Oh, what a happy day that will be!  All of nature awaits the day of our final redemption.  As St. Paul writes to the Romans:

For we know that the whole creation groans and labors with birth pangs together until now.  Not only that, but we also who have the firstfruits of the Spirit, even we ourselves groan within ourselves, eagerly waiting for the adoption, the redemption of our body

When the whole world is falling apart, wars here, there, and everywhere, foreign and domestic terrorism on the rise, the stock market plunging in fear, deep corruption in government, moral bankruptcy among the high and mighty, faithlessness and apostasy on the part of the religious elite, and every imaginable evil seemingly triumphant – in the terrifying signs that appear to signify, in the words of the singer, a snowball headed for hell, we look at what terrifies the world and we see the tree budding in the spring.  Just as surely as the budding tree tells you that summer is at hand, the falling apart of this world tells us that the day of our redemption is at hand.

This, brothers and sisters in Christ, is why we will compromise anything else, let go of everything else, and concern ourselves with nothing else but holding on to God’s Word, confessing it in its entirety as divine truth, compromising not one word of it, listening to it as if our lives depended on it, because they do, and resting our hope in him who came in humility to redeem us, so that when he returns in glory to judge, we can meet him with joy and say: Free at last, free at last, I thank God I am free at last!