↓
Home ☰
Home→Uncategorized→LCMS Commentary on Mark – the good and the horrible of it. Log in 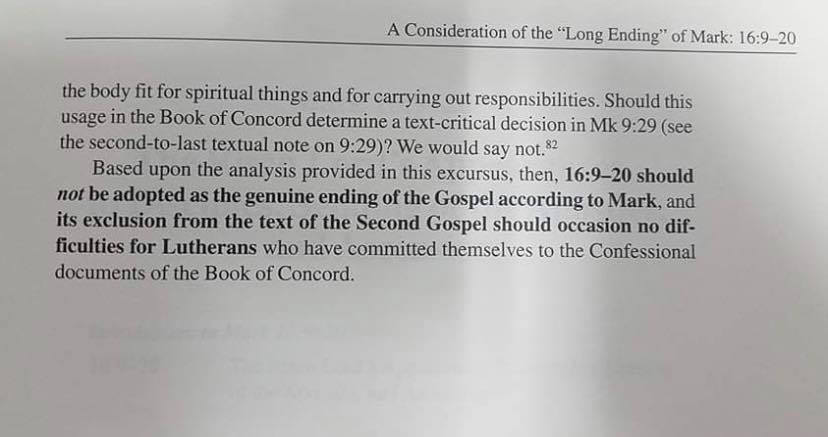 The last volume of the Concordia Commentary on the Gospel of Mark is out.  Some interesting things appear to have taken place to produce this volume.

First, the main author, Dr. Voelz, apparently would not finish out the Gospel, believing that the longer ending of Mark (16:9-16:20) “should not be adopted as the genuine ending to the Gospel according to Mark”.  It gets even more puzzling in that he states that this should cause no difficulty with regard to subscription to the Lutheran Confessions.

From the Small Catechism (one of the documents of the Lutheran Confessions):

What benefits does Baptism give?

It works forgiveness of sins, rescues from death and the devil, and gives eternal salvation to all who believe this, as the words and promises of God declare.

Which are these words and promises of God?

Christ our Lord says in the last chapter of Mark: “Whoever believes and is baptized will be saved, but whoever does not believe will be condemned.” (Mark 16:16)

Dr. Luther apparently didn’t agree with this Concordia Commentary author.  Neither should we.

Another interesting note – Concordia Seminary St. Louis, where Dr. Voelz taught for years until his recent retirement to the Fort Wayne area, does a dramatic reading/performing of the Gospel of Mark that apparently doesn’t include the ending either.  See the flyer for their performance.  It ends with Mark 16:8.

I will say that Concordia Publishing House did good by at least having Dr. Mitchell finish out the Gospel of Mark.  Thanks to Dr. Kintz and his folks for that.

Apparently LCMS doctrinal review had no problem with the above statement.