The Twenty Seventh Sunday after Trinity

“Wisdom and Folly in Light of God’s Word”

“Then the kingdom of heaven shall be likened to ten virgins who took their lamps and went out to meet the bridegroom. Now five of them were wise, and five were foolish. Those who were foolish took their lamps and took no oil with them, but the wise took oil in their vessels with their lamps. But while the bridegroom was delayed, they all slumbered and slept. And at midnight a cry was heard: ‘Behold, the bridegroom is coming; go out to meet him!’ Then all those virgins arose and trimmed their lamps. And the foolish said to the wise, ‘Give us some of your oil, for our lamps are going out.’ But the wise answered, saying, ‘No, lest there should not be enough for us and you; but go rather to those who sell, and buy for yourselves.’ And while they went to buy, the bridegroom came, and those who were ready went in with him to the wedding; and the door was shut. Afterward the other virgins came also, saying, ‘Lord, Lord, open to us!’ But he answered and said, ‘Assuredly, I say to you, I do not know you.’ Watch therefore, for you know neither the day nor the hour in which the Son of Man is coming.”  Matthew 25:1-13 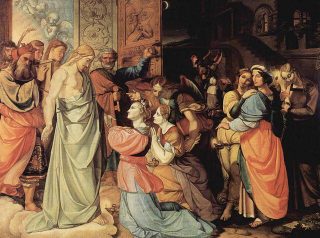 For four weeks we prepare for Christmas.  The celebration of Christmas begins on December 25th or the 24th in the evening, and continues until January 6, which is Epiphany.  In the church calendar, the Sundays that come at the end of the year feature Gospel and Epistle lessons that focus on the end times: the end of this world; Judgment Day; and in the case of today, the wedding of the Bridegroom, Jesus, and his bride, the Holy Christian Church.  Then the Sundays in Advent focus on preparing to receive the Christ Child of Bethlehem in repentance and faith.  This is the church year.

The world’s year is very different.  There is no mention of the last times, Judgment Day, and the end of this world.  There is no mention of repentance and Advent.  Christmas begins immediately after Thanksgiving.  On the day after Thanksgiving, Sidney features a parade that celebrates Christmas.  Candy canes are handed out to children lined up along Central Avenue.  The entire nation prepares to celebrate Christmas by spending billions and billions of dollars to buy more and more stuff.  Most Americans know the theme of Black Friday: save lots of money by spending lots of money to buy lots of stuff.  How many know the theme of the last Sunday of the Church year?  It is to this theme that I call your attention this morning.  The topic is: “Wisdom and Folly in Light of God’s Word.”

Jesus teaches his church to be prepared for the end of the world by telling a number of parables.  The one before us this morning is the story of the ten virgins who are waiting for the arrival of the bridegroom.  First let’s look at the story itself.

The bride and groom are bound together by the act of betrothal.  Soon afterward, the groom goes to the home of the bride and takes her to his home where the marriage will be consummated, followed by several days of celebration.  In the story before us, ten virgins – friends of the bride – are waiting for the beginning of the bridal procession to the groom’s home.  None of them knows when the bridegroom will arrive, but they all know that when he does the wedding celebration will begin.  Five of the virgins are wise and five are foolish.  All ten virgins fall asleep before the bridegroom arrives.  He arrives unexpectedly at midnight.  All of them wake up to prepare their lamps.  The city has no lampposts.  They must light their way to the wedding celebration with their own lamps.  They get the wicks ready, but the foolish virgins notice that they have no oil for their lamps.  Without oil, the wicks won’t light.  No oil, no fire, no light.  They need oil to fuel their lamps.  They ask the wise virgins for some of theirs, but the wise virgins tell them to go and buy for themselves, and of course, you know how the story ends, as they run to find oil for their lamps, the wedding begins, the door to the groom’s home is shut, and when the foolish virgins seek entrance, he says to them: “Assuredly, I say to you: ‘I do not know you.’”

Jesus says, “Blessed are those who hear the word of God and keep it.”  They hold onto it.  They take it to heart.  They listen carefully to it.  They go to where it is purely preached.  They do not despise preaching and God’s word, but hold it sacred and gladly hear and learn it.  Their faith is not their own decision, as if they decided to make Jesus their Savior and Lord.  Their faith is not fueled by their own will, as if they could, by their own reason and strength, believe in the Lord Jesus Christ.  Their faith is God’s gracious creation.  It is God’s gift, fueled by his word.

True faith brings confidence, but it is not self-confidence.  It is knowledge, but not a mere intellectual comprehension.  It is a living faith.  It is saturated with Christ himself.  Christ does not pay our bills, make us new friends, or set up for us a comfortable retirement account.  He doesn’t empower us to right the injustices of this world, or set us up in a prestigious social position.  He gives us what is much more precious.  He confronts our spiritual enemies and defeats them.  He defeats our sin by bearing its weight, suffering its guilt and punishment, and dying the death that is sin’s wages.  He wins forgiveness of our sins.  He gives us this forgiveness in the gospel.  He confronts our death and replaces it with life.  He gives us this life in the gospel.  He battles the devil, the liar and murderer of souls, and silences his forked tongue by crushing his head under his bruised heel.  He gives us victory over the devil in the gospel.

Faith without oil is no faith at all.  There is no forgiveness of sins.  There is no true life.  Artificial ornaments replace true spiritual life.  And while the devil is in control, subservience to the father of lies is seen as liberating.  Church-going heathen, with names on church rosters, live oblivious to the fact that they’re carrying around empty lamps that are useless.

What folly!  It’s like carrying around an empty thermos, just in case you get thirsty, and when you’re thirsty there’s no water to be found.  It’s a religious exterior with no substance to it.  Since there is no genuine faith, there is no genuine love.  The life of self-sacrifice appears to be useless, because they cannot see beyond their own immediate wants.

The foolish virgins are baptized.  They attend church, at least, sometimes.  They stand with the congregation, they sit with the congregation, and they kneel with the congregation.  But they don’t belong, even though their names are on the roster.  They say the words of the prayers and sit respectfully when the lessons are read and the sermon is preached.  They go to Communion.  They eat and drink Christ’s body and blood.  They even make a stab at reading the Bible now and then, but quickly get bored and distracted because there are so many other things to do.

The foolish virgins are indistinguishable from the wise virgins as far as their outward appearance is concerned.  The difference – and this is a difference that makes all the difference – is that the foolish virgins have no oil in their lamps while the wise virgins have oil.  There’s a reason they don’t have oil.  They forgot.  They forgot because they didn’t care.  They didn’t care because they saw no need.  They saw no need because they were too filled with themselves to acknowledge that they need Jesus to rescue them from their sins, to destroy their death, and to conquer Satan, their enemy.

It’s good to go to church.  You get to hang out with decent people, learn interesting things, and gain some religious structure to your life.  You ought to go to church.  But going and being physically present doesn’t make you a part of the church.  The church is the Communion of Saints.  It is those whose lamps are lit because their faith is drenched in Christ the Savior of sinners.

The gospel isn’t something to learn and set aside in a safe compartment where nothing can touch it.  If nothing can touch it, it can touch nothing.  The Christian faith is a living faith precisely because it is Christian.  It claims Christ’s achievements.  It claims his obedience, his suffering, death, and resurrection.  It lives on what Jesus has done.  His love triumphed over hatred when he bore our sins on the cross.  When we take in his gospel we take in his love.  With forgiveness of sins is also life and salvation.  This is the life we live.  It is a life of love.  It’s a life guided by the wisdom that comes down from above.  That wisdom is planted deep inside of us.  It is the love of God – a love we don’t deserve, but that God freely and repeatedly showers upon us.  It is the oil of the Spirit.  When it is to you your very life, you do not forget it or neglect it.  Those who take it for granted are fools.  They don’t know what is valuable in life.

When Jesus comes to consummate his marriage to his holy bride, those with true faith will be ready to meet him.  There is no true faith without the Holy Spirit, that is, without the word of God.  This is why we cherish God’s word, take it in, and take it to heart.  It keeps our faith alive.  Those who despise God’s word don’t know God and God doesn’t know them.  They will be locked out of heaven.  Jesus will say to them, “I tell you the truth, I do not know you.”  When we live on the word of God, God’s wisdom becomes ours, and lightens our way to heaven.