St. Michael and All Angels Day

“Take heed that you do not despise one of these little ones, for I say to you that in heaven their angels always see the face of My Father who is in heaven. For the Son of Man has come to save that which was lost.”  Matthew 18:10-11 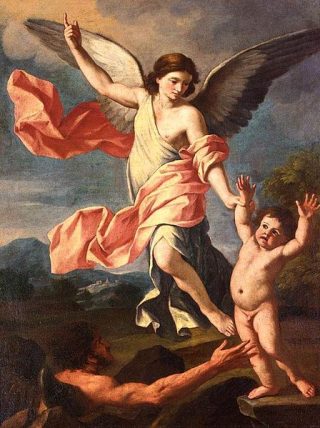 I walk with angels all the way,

They shield me and befriend me;

All Satan’s power is held at bay

When heavenly hosts attend me;

They are my sure defense,

All fear and sorrow, hence!

Unharmed by foes, do what they may,

I walk with angels all the way.

One of the most influential Lutheran theologians of the twentieth century was a man by the name of Rudolph Bultmann.  Bultmann became famous for advocating – here’s a fancy term for you – the demythologizing of the Holy Scriptures.  What is demythologizing, you ask?

Bultmann, along with most modern theologians, assumed that the Bible contains myths that cannot be taken literally by us today.  Ancient peoples lived in a world inhabited by angels and demons because they didn’t understand what we know from modern science.  They attributed what they didn’t understand to the agency of spirits.  Accidents and diseases were said to be caused by demons.  When things went well it was because angels were protecting the people.

This pre-scientific view was perfectly fine for then and there, but it won’t do for the church of the twentieth century.  We must reinterpret the Bible, Bultmann insisted.  We must extract from it its mythical elements because people today just won’t buy into a Christianity laden with incredible myths.

Well, you can imagine what happened when folks started demythologizing the Bible.  Before you knew it, all of the supernatural features were gone.  Gone was the atoning sacrifice for sin and the bodily resurrection from the dead.  Who can believe such things anymore?  Everything miraculous was stripped away.  The demythologizing of the Bible was nothing but a wholesale rejection of biblical teaching.

Bultmann wasn’t as smart as he thought he was, but then Bible doubters rarely are.  Modern science cannot disprove the existence of angels.  The fact that people don’t believe in something is no evidence that it doesn’t exist.  We do live in a world inhabited by good and evil spirits.  They surround us every day.  It is true that in the past people ignorantly ascribed to the agency of angels and demons things that had a perfectly natural explanation.  But if people in times past were ignorant concerning angels, our generation is the most ignorant of them all.

Nowadays angels are invariably pictured as sweet, pretty, and relatively harmless creatures.  In the Bible angels appear as men but never as women.  Today angels are usually pictured as women.  If the popular view of angels reflects popular piety we can assume that for most people today religion is ornamental and primarily intended for women.

But the biblical view of angels is quite different.  The Bible portrays angels as fearsome creatures.  After Adam and Eve sinned and were expelled from the Garden of Eden, God sent angels with fiery swords to keep them away from the tree of life.  When Sennacherib, the king of Assyria, mocked the true God and went to war against Jerusalem God sent one angel who destroyed his entire army.  Sennacherib had to go home in disgrace.  (2 Chronicles 32, 20-22)  When an angel appeared to the shepherds outside of Bethlehem to announce the birth of Jesus Christ, they were struck with fear.  Biblical angels aren’t pretty and harmless.  They strike fear.  When Zacharias called into question the angel’s testimony concerning the birth of his son John, here’s what St. Luke records happened:

And the angel answered and said to him, “I am Gabriel, who stands in the presence of God, and was sent to speak to you and bring you these glad tidings.  But behold, you will be mute and not able to speak until the day these things take place, because you did not believe my words which will be fulfilled in their own time.”  Luke 1:19-20

As we know, Zacharias remained mute until John was born.

The word angel means messenger.  God has frequently communicated through angels.  He announced the conception, birth, and resurrection of Christ through angels.

Angels are spirits.  They have no bodies.  Angels are not human and human beings don’t become angels when they die.  Sometimes angels appear as men.  Sometimes, as in visions, angels appear with wings.  While the Bible pictures angels in a variety of ways, strictly speaking, angels are invisible.

They serve God and God’s people.  They speak for God.  They act on behalf of God.  They are powerful.

And, according to our Lord, the children have guardian angels.  Little ones are not just those who are young in years.  It includes all who are like the little children, who are little in their own estimation, who hold with the faith of a child to the promises of God.  Their angels behold – they see, they look upon – the face of God the Father.

Jesus said so.  Jesus cannot speak falsely or mislead us.  Jesus places great value on children and on their faith.  When he warns against offending them or causing them to sin he is warning against putting their faith in jeopardy.  What does this mean?  It means depriving those baptized in Jesus’ name of God’s word by which they may grow and be strengthened in their faith.  This can cause them to fall away.  It refers also to teaching false doctrine that could confuse the little ones and replace the true faith the Holy Spirit has worked in their hearts with a counterfeit faith that yields death instead of life.

God values the little children.  He proved it by becoming one of them.  The devil opposed the incarnation of the Son of God.  He resented the creation of man.  This is why he led Adam and Eve into sin. 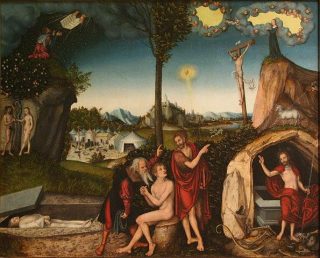 He wanted glory for himself.  While the angels of God rejoiced in God’s creation of man and woman in his own image, Satan and his demons despised the human race from the very beginning.  The war in heaven that led to the casting out of Satan was waged by Michael, the archangel.  Michael is none other than the Lord Jesus Christ himself.  The cosmic battle between God and the devil, between good and evil, between Christ and the accuser of his people began at the beginning of time and the decisive victory was won on Calvary where Jesus, the seed of the woman, crushed the lying head of the old, evil foe, the devil, the murderer of souls, the slanderer of God’s people, the father of all lies, heresies, and false teachings.

Rudolph Bultmann was a fool and he is joined by millions of other nominal Christians who foolishly think that the world that is measurable by scientific measurements is the only world in which we live.  We live surrounded by good and evil, by spirits devoted to the good and spirits devoted to the evil, by angels and demons.  This is not the mythical world of our ignorant and superstitious ancestors!  This is the real world.  It’s a world in which the battle over souls is waged every single day.

The angels served our Lord Jesus in his battle against the devil.  There was not a time during Christ’s life of holy service and his sacrificial death that the heavenly angels did not attend him and bear him up and strengthen him.  These are the angels who serve those who believe in Jesus, who trust in his victory over the devil, who look to him as their only Mediator before God throne of justice in heaven.

The value of children is seen in the fact that God became a little baby. 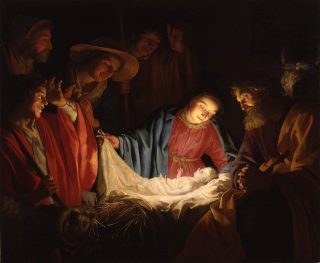 He became one of us: a child, a boy, a man.  He offered his life up to the penal justice of God as the sacrifice of atonement to buy back the children who had been led into sin and death.  Christ’s incarnation tells us the value of children.

Children do not exist for the entertainment of their parents.  God doesn’t give us children so that we may live vicariously through them.  Children are blessings that we give back to the God who gave them to us.

Fewer and fewer children are being born these days.  Fewer people are getting married and they’re not having children.  Abortion on demand is the settled law of the land.  Children are regarded as rather inconvenient and expensive commodities.  Parents hire others to raise and educate their children.  The so called experts on childrearing teach children precisely the opposite of that humility in which a child enters into the kingdom of God.  Surely, we live at a time when children are despised.

Yet Jesus says that if you would be the greatest in the kingdom of God you must be converted and become like a little child.  They are small and unimportant.  But this is how we come to know God.  We come to know him in humility.

God will avenge his children.  The reason murdering abortionists is wrong is not just because it is taking the law into your own hands and acting against established governmental authority.  It’s worse than that.  It is an act of unbelief, assuming that God won’t avenge the little children.  He will.  He will arise and judge those who slaughtered the little ones for profit.  And he will always be the refuge of forgiveness for those who have wronged the little children and have come to repent of their sin.

Let the little children come to me, says Jesus.  Christians baptize babies, they don’t abort them.  And they bring them to Jesus, not just when they are baptized but throughout their lives.  In so doing they walk with angels.

Little children of every age need a Savior.  After warning us not to despise the little children, Jesus appeals to the fact that he came to save those who were lost.  He is serious about this.  Ultimately, everything he orders his angels to do is for this purpose: to bring sinners to repentance and faith.  Now at the heart of this faith is the crucifixion of Jesus for our sins.  We look at him dying for us and we believe that God freely forgives us all our sins for Jesus’ sake.  Since Jesus has lived and died for us we believe that he has won forgiveness and salvation for us and that he gives us this forgiveness in his holy word.  This we believe.

And in believing this, we live as well on every single word that God speaks.  We don’t despise the faith of our fathers in God’s promise to send angels to protect us.  In fact, we rely on God every day to bless our efforts and to send his invisible servants – his angels – to shield us from harm.

And when we gather together here in this place to praise our God and to receive from him the heavenly treasures he offers us in his gospel and sacraments we are joined in fellowship with the angels.  We sing the Sanctus – the holy, holy, holy – with the angels in heaven.  Then we go to the altar to eat and drink Christ’s body and blood, given and shed for us, for the forgiveness of our sins, for life, and for salvation.  The angels ascend and descend for here is the gateway to heaven.  Here Jacob’s dream is fulfilled as the Lord God  become the Son of Man comes to us, forgiving us, embracing us, and guaranteeing to us victory over all evil.  We walk with angels and so we walk with Jesus and what a wonderful walk it is!