Below is a translated excerpt from August F.C. Vilmar’s “Textbook of Pastoral Theology” (Lehrbuch der Pastoraltheologie) from 1872.  Vilmar was an influential figure for the Lutheran Confessional movement in 19th century Germany.  His remarks on congregational song are insightful and thought-provoking for us even today.

Song is the form of our common audible worship, especially when worship takes the form of praise.  It is a necessary part of our worship.  Only through congregational song is it possible to bring the full harmony of the congregation to expression.  The 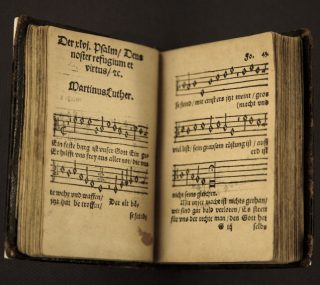 In the Greek Church, common congregational song could not come to fruition.  The concept of “singing together” contradicts the Greek character.  It is not much different in the Roman Church.  Therefore it can be said in a certain respect that this type of song has something specifically Germanic about it: the full expression of the certainty of salvation belongs to us in our congregational song.  The highest peak of faith lies in our people.  Therefore it also happens when the faith declines among us; when this happens, we fall much farther than other peoples.

Concerning hymns texts, one must distinguish between the Church Hymn and the Spiritual Hymn.  The Church Hymn expresses the common experience of all believers.  It is folksy in the strictest sense of the word.  It touches on essentially the same elements as would an epic poem.  Facts form the content of the Church Hymn, which by necessity must be experienced by every church member.  The Spiritual Hymn expresses the experiences of the individual and certain religious feelings.  It is meant for the need of the individual.

Actual Church Hymns are those of the 16th century, especially Luther’s hymns.  After the 17th century, there are no more Church Hymns.  The hymns of Gellert and Klopstock are Spiritual Hymns and should be removed from churchly hymn books.  It is our certain pastoral duty to reintroduce the old authentic Church Hymns and to pursue solid texts with all endurance.  Only a few hymns are necessary, 150 is more than enough.  The thick hymnals are unpractical.

In congregational song, some hymns must be sung often, as they were in the time of the Reformation.  That way the congregation will always hold fast the experiences of our church, always available in our enduring treasury of hymnody.  When it comes to the reintroduction of good hymnals, so should we observe the following: The hymns which are sung in the churches, for the most part, they are introduced by custom or habit.  In a sense, they introduce themselves.  On the other hand, we also know how hymns naturally fall into disuse.  But in Hessen, since the time of Landgrave Moritz, a special canon for Church Hymns has existed.  The last chapter of the Church Order from 1657 contains this Hymn-Canon.  This cannot be abrogated, even if hymns appear to be falling into disuse.  Where these hymns have fallen out of use, here they can be reintroduced by means of church law.

The melodies: The old Church Hymns have their own unique melodies; text and melody here belong together as with a folk song.  The melody stands together with the text.  Therefore one should seek to restore the old melodies up until Johann Krueger, Paul Gerhardt’s composer.  Since the end of the 17th century, the Arian style has penetrated into congregational song under the influence of the pietistic school.  For example, Arian melodies are found in the following hymns: “Lobe den Herren, den maechtigen Koenig der Ehren (Praise to the Lord the Almighty)” and “Seelenbraeutigam, Jesu Gottes Lamm.”  Dactyls are very disadvantageous in Church Hymns.  The ugly French Psalm-melodies of Marot and Beza are to be rejected.

The so-called rhythmic song is the old tempo in which the traditional hymns are sung.  This tempo is very irregular in contrast to the Gregorian song, which is still found in our hymn book.  Slow tempo singing is often unbearable.  The rhythmic song, however, has it its worth, when it is placed alongside Gregorian liturgical song.  Otherwise, the seriousness of the Divine Service would suffer under the springing tone of rhythmic song.  The rhythmic character is missing in many very good hymns, including: “Now Thank We All Our God” and “In God, My Faithful God.”  These hymns may not be sung rhythmically.

One ought to take into consideration how to introduce time-tested hymns in the congregation.  “Come Holy Ghost,” in the beginning; and where possible according to the old melody.  Then the Agnus Dei (Lamb of God, Pure and Holy).  Later especially the old Te Deum.  One should read the Te Deum and the Litany at least from the pulpit (at least on days of prayer and repentance), so that one can speak the responses in the beginning.  Later the congregation can become accustomed to singing the responses, after first learning how to speak them.  One does not need special hymns for every sermon.  The main hymns are appropriate for every sermon, as long as the sermon is evangelical.  One must sing these hymns often.  This way the congregation learns not out of the book (originally congregations sang from memory in the church without hymnals), but to sing from the heart.