The Twenty Fifth Sunday after Trinity

But I do not want you to be ignorant, brethren, concerning those who have fallen asleep, lest you sorrow as others who have no hope.  For if we believe that Jesus died and rose again, even so God will bring with Him those who sleep in Jesus. For this we say to you by the word of the Lord, that we who are alive and remain until the coming of the Lord will by no means precede those who are asleep. For the Lord Himself will descend from heaven with a shout, with the voice of an archangel, and with the trumpet of God. And the dead in Christ will rise first. Then we who are alive and remain shall be caught up together with them in the clouds to meet the Lord in the air. And thus we shall always be with the Lord. Therefore comfort one another with these words. 1 Thessalonians 4:13-18

Death makes us sad.  There are many reasons for this.  When someone we love dies we are sad because we will miss our loved one.  If your husband dies, he isn’t just going away on a trip to return next month.  He’s gone and you won’t see him against this side of the grave.  That makes you sad. 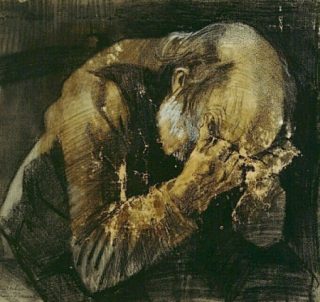 Death makes us sad because death is God’s judgment against us for our sins.  When Moses writes that the soul that sins shall die and when St. Paul writes that the wages of sin is death they are writing what is true according to the very nature of sin.  God warned Adam about disobeying him and eating the fruit that God told him not to eat.  He said, “The day that you eat of it you shall surely die.”  Death is what disobedience yields.  This means that death is punishment for sin.  That’s what makes us sad when we face death.

There is nothing wrong with sorrowing when facing death, but the Apostle tells us not to sorrow as those who have no hope.  Those who have no hope are those who do not know Christ.  They are ignorant.  They lack the knowledge that gives eternal life.  When they face death they face nothing but loss because they have no reason to believe that there is anything good waiting for them beyond the grave and, indeed, there is not.  That’s because without Christ we must pay the wages of sin and those wages are not just bodily death but eternal death severed forever from the source of true life and hope and love.

This is why the inspired Apostle writes, “I do not want you to be ignorant.”  He’s writing to Christians who mourn the death of fellow Christians.  Go ahead and be sad.  Mourn.  Cry your heart out.  There’s no sin in that.  But when you sorrow you sorrow in hope.  You know that death is not the end of the road for a Christian.  In fact, here the Bible calls it a sleep.  Paul writes, “I do not want you to be ignorant, brethren, concerning those who have fallen asleep, lest you sorrow as others who have no hope.”  If you are asleep you will wake up again.  Death for the Christian is a sleep.  The body that decays in the ground is but resting, waiting to be raised incorruptible on the last day. 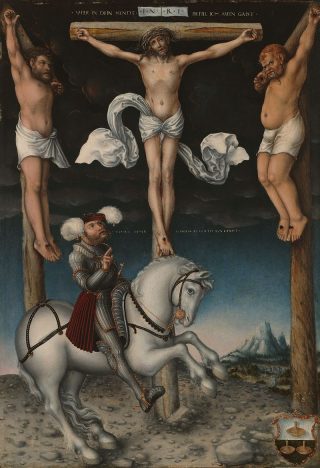 But the greatest benefit of Christ’s death is that it is vicarious.  He dies in our place.  He dies the real death, the punitive death, the death that God warned was the wages of sin and the just deserts of all sinners.  He, the innocent, dies in the place of the guilty, as our substitute, so that by his death we might be delivered from death.

Death is a sleep for those who sleep in Jesus.  St. Paul writes, “For if we believe that Jesus died and rose again, even so God will bring with Him those who sleep in Jesus.”  The death and resurrection of Jesus is the guarantee that those who believe in Jesus will not die but only sleep.  By suffering for our sins he has stripped sin away from death, thus leaving death an empty shell, nothing but a sleep, a temporary separation of the body and the soul.

Christ’s Church cannot be divided.  The body of Christ is indivisible.  The Church is the bride of Christ, and Christ is no polygamist.  He has but one wife.  The Church is joined in an intimate union with Christ, whether living here on earth or sleeping in the ground and waiting for the resurrection of the body on the last day.

When Christ returns to judge the living and the dead, his coming will be announced by the archangel.  St. Paul writes: “For the Lord Himself will descend from heaven with a shout, with the voice of an archangel, and with the trumpet of God.”  His coming will not be in secret.  The whole world will see him.  All people will be brought before him.  The dead will be raised.  Those living in their bodies will be changed.  St. Paul continues:

And the dead in Christ will rise first. Then we who are alive and remain shall be caught up together with them in the clouds to meet the Lord in the air. And thus we shall always be with the Lord. Therefore comfort one another with these words.

The Christians who have died will rise first and then those Christians who have not died will be caught up together with them in the clouds to meet the Lord Jesus as he returns.  We will always be with him.  Nothing can separate us from him.  The grave cannot destroy the joy we have in Christ because the grave cannot separate us from the love of God that we have in Christ.

Speculations abound about end of life issues.  For the past generation or so, the Hindu notion of reincarnation has been popularized here in America.  People think that after death they come back in a different body to live another life here on earth.  For them, the goal of life is to get rid of the body.  But then they don’t believe that the creation is necessarily a good thing.  We Christians know that it is.  This is what the resurrection affirms for us.

When God’s original creation fell from grace, he did not discard it.  He did not toss it aside and start over with something else.  God loves those he made in his image – even those who have fallen away from him, and remain far away; living lives as if God doesn’t exist.  God loves them.  He reaches out to them.  Jesus suffered and died for them, and when Jesus rose from the dead on Easter Sunday it was their death he destroyed.  He died the death of all humanity.

Our comfort is what this world needs.  I know that many people who wouldn’t think of darkening the door of church on a Sunday morning or any other time of the week for that matter will talk about life after death with a brash confidence that they aren’t afraid of it.  They will either assume an air of nonchalant indifference (as if anyone in his right mind could not care about where he will spent eternity) or they will fall back onto the sentimental notion that a good and loving God couldn’t possibly require retribution against sinners.  That would not be nice.

But God isn’t from North Dakota, or Minnesota either.  He doesn’t care one bit about the religion of inoffensive niceness that prevails in these parts.  The Bible says that our God is a consuming fire.  He visits the iniquities of the fathers upon the children to the third and fourth generation of them that hate him.  He is not mocked.  Death isn’t a power outside of God, a natural event that he observes, a part of nature that just got away from the Author of life.  No, death is God’s personal judgment against those who die and it is proof that we are all accountable to our Maker for our lives.  When we die we are in his hands.  So in whose hands are you before you die?

This is our comfort.  It is that we belong to God as his dear children.  This comfort comes from knowing God in the person of his Son who died for us and rose again.  It is the comfort in knowing what God alone can teach us.  For the knowledge of the resurrection of the body and the life everlasting is not a natural knowledge.  The natural knowledge would be that dead is dead, never to rise again.  But we have supernatural knowledge that keeps us from sorrowing as those who have no knowledge and no hope.  We live and die in hope because we know that all our sins are forgiven for Christ’s sake.

Those who don’t know Christ have no hope because they live in ignorance.  They can guess.  They can speculate.  They can wonder.  But they cannot know.  They cannot know what will happen to them when they die because apart from Christ God is a consuming fire.  This means that everything anyone knows about death and the life after death apart from Christ is bogus.  It is but a human rationalization of death, and a pathetic attempt to ward off the obvious: that death is the judgment of God.

We who are baptized into union with Christ’s death and resurrection and know by faith him who died for us, bearing our burden of sin, paying its wages for us, dying our death for us, suffering its judgment for us, have comfort in the face of death because we know that we will not experience or suffer what our Lord Jesus experienced and suffered.  For him death was death.  For us it will be but a sleep.  It will not break our fellowship with God.  These are the words by which we comfort ourselves when we must face death.  They comfort us because they are the words of the Holy Spirit, the Comforter.