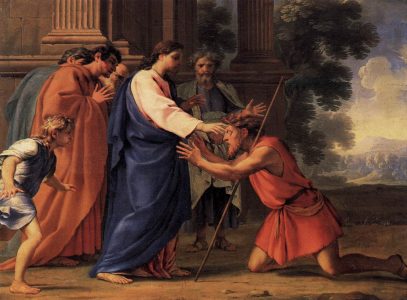 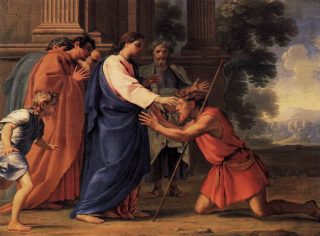 “The Lord’s Prayer in the Lord’s Passion” is the theme of the Lenten devotion that Steadfast Lutherans has put together this year. The following sermon introduces the theme of prayer, preached on Quinquagesima (Luke 18:31-43), and largely influenced by The Large Catechism III.26-27 and The Apology of the Augsburg Confession XX.17-20.

This is the last Sunday before Lent, which begins this Wednesday. During the Lenten midweek services we’ll be going through the Lord’s Prayer line by line, which is fitting, since the Church has long had the practice of being more purposeful in prayer during the season of Lent. The appointed reading for today, in which the blind beggar prays to Jesus, serves as a wonderful introduction to this Lenten emphasis. Today we learn the basis and foundation of prayer: prayer is based on God’s Word and Jesus’ merits.

“As he drew near to Jericho, a blind man was sitting by the roadside begging.” The rich don’t beg. The powerful don’t beg. The needy beg. We are all beggars before God, because we have no strength or riches in his sight; rather, we are needy. Being needy is scorned in our society. Neediness is listed among the great American vices, right alongside talking to strangers and being intolerant. As a country, we generally look down on the needy and idolize the self-made man, ignoring the fact that such a person, who gave birth to himself, nursed at his own breast, and changed his own diapers, does not exist.

Now our neediness is not the basis of our prayer, meaning it’s not because we’re needy that we receive what we ask for. But if we don’t recognize out neediness, we’ll never pray, because we won’t think we need anything from the Lord. You’ve often neglected prayer. It’s as if Jesus were walking by, and there you sat in rags, unable to stand up, not having two pennies to rub together, and you said, “All’s well here, Jesus. Good day. Don’t let me hold you up.” It’s a mercy that the Lord gives us various afflictions in life, because by them he teaches us what we really are and opens our beggar mouths in prayer.

In the same way it’s a mercy that the Lord shows us our lowliness by his Law, because then we recognize our need for his Gospel. And in this we see that not only is neediness permitted in the kingdom of heaven, but the kingdom of heaven is for the needy. The Gospel is for those who lack the righteousness of the Law, and prayer is for those who stand before God with nothing. So if you consider yourself a “poor, miserable sinner,” then thank God that by his Word he has given you an accurate assessment of yourself, and take heart that Jesus has spoken his beatitude to you, “Blessed are the poor in spirit, for theirs is the kingdom of heaven.”

So while we have not yet reached the basis of prayer, we have at least identified why we might ask God for something, namely, because we’re beggars who can’t get what we need for ourselves. The blind man sits begging. “And hearing a crowd going by, he inquired what this meant. They told him, ‘Jesus of Nazareth is passing by.’ And he cried out, ‘Jesus, Son of David, have mercy on me!’” The crowd says “Jesus of Nazareth,” and yet the beggar says, “Jesus, Son of David,” and this alerts us to the important fact that the beggar has heard of Jesus before. The beggar has heard the Word that Jesus is no ordinary person, but is the Christ: descended from David according to his flesh, and worthy to receive prayer according to his divinity. The beggar has heard that Jesus has mercy on the helpless, and according to that report, the beggar trusts that Jesus will have mercy on him.

Here we see the first part of the basis of prayer, which is the Word of God. The beggar does not pray to a random stranger; rather he prays to a very specific person whom God’s Word has identified as the Son of God and the only Mediator between God and men. And we look to Jesus in faith and in prayer for the same reason: we’ve received the Word of God that identifies Jesus as our Mediator, and therefore we direct our prayers to him, knowing that everything we’ve heard about him is true, knowing that he cares for us more than he cares for his own life, and knowing that he has mercy on the helpless.

The beggar prays on the basis of God’s Word. But then he meets opposition in his praying. “And those who were in front rebuked him, telling him to be silent.” Likewise the devil opposes our prayers and tries to use our troubled conscience to silence our prayers. The devil tells you, “Jesus doesn’t want to hear it, Jesus is too busy for you, Jesus has better things to do, you’re not worthy to address him, you have no right to expect anything from him, the weight of your sins makes all your petitions come crashing down to the ground unheard.

And with this in mind the troubled conscience can make its answer to Satan. “I have sinned. I am not worthy that Jesus should even notice me, let alone hear my prayers or answer them. But I don’t expect an answer to prayer based on my own merits. I expect an answer to prayer based on Jesus’ merits. He alone is perfect and righteous, and his perfection and righteousness is my hope. His perfection and righteousness not only allow a sinner’s prayers to be heard, but even take this sinner’s sins away so that Jesus sees me in the light of his own perfection and righteousness. Because he has died for my sins and was raised for my justification, I’ll pray on his merits and character and name, as David does in Psalm 109, ‘You, O God my Lord, deal on my behalf for your name’s sake; because your steadfast love is good, deliver me, for poor and needy am I.’”

And so great is the Lord’s steadfast love that he did not scorn becoming poor and needy for you. He humbled himself to the earth, scraped by in poverty, and then at his glorious death did not even call his own skin his own, but donated to you true riches. Jesus has become your wealth and strength with God, and he lives as your Savior and Mediator, and loves to give even more than you dare to ask. And thus in the face of the devil’s attacks the Christian conscience says, “He who has the Lord and remains silent in his distress is a fool. Now is not the time for silence, but for more prayer.”

And thus the conscience ignores the devil’s attempts to silence prayer, and the devil only succeeds in prompting more prayers. “And those who were in front rebuked him, telling him to be silent. But he cried out all the more, ‘Son of David, have mercy on me!’”

And then in the rest of the account Jesus comforts us greatly by showing what he does with prayers that are based on God’s Word and his merits. “And Jesus stopped and commanded that he be brought to him.” Jesus was processing along with a great multitude. Indeed, this very procession is the one that brought Jesus to Jerusalem on Palm Sunday. A royal parade the likes of this in size and majesty had not been for many years, and Jesus stops the whole thing on a dime the second a poor blind beggar cries out. By this Jesus shows how precious your prayers are to him, and how much he cares for you.

“And when he came near, he asked him, ‘What do you want me to do for you?’” From this we learn two things. First, when we pray Kyrie Eleison, “Lord, have mercy,” we should consider what we’re asking for. Why do we need Jesus’ mercy? What exactly do we want him to do? Forgive our sins, grant healing, protect us from evil, guard us in temptation, strengthen our faith, increase our love, preserve his Church? Yet this isn’t a law, as if “Lord, have mercy” were an insufficient prayer in itself. The Kyrie is one of the best and most honest prayers, because so often we don’t even know exactly what we need, and yet we can pray anyway, “Lord, have mercy,” knowing the Lord will have mercy in whatever way is best for us.

Second, we see that Jesus loves to hear prayer, not for his own sake, but for our sake, because he loves us. Jesus inclines his ear to the man and emboldens the man to ask for something great. There’s a temptation to limit our prayers to what we think we can reasonably expect. But Jesus’ question here, which he continues to ask with his living voice, throws all our hesitancy and doubt to the wind. “What do you want me to do for you?” “Pray, man! Don’t hold anything back. I want to hear and grant your prayers.”

The beggar says, “Lord, let me recover my sight.” And Jesus says, “Recover your sight, your faith has made you well.” Many false teachers have twisted this verse to say, “If only you believe strongly enough, Jesus will grant you healing.” If only such teachers had muteness to accompany their blindness! But in this passage there’s no mention of degrees of faith or kinds of faith. And in fact, Jesus more literally says, “Your faith has saved you.” His words show that prayer and justification go together. The faith that trusts Christ as Savior is the same faith that knows he hears our prayers, the same faith that expects an answer.

“And immediately he recovered his sight and followed him, glorifying God.” The Lord promised in Psalm 50:15, “Call upon me in the day of trouble. I will deliver you, and you will glorify me.” Jesus has shown this Word to be true, and the beggar’s faith rejoices at this confirmation of the Word. The crowd gets to share in this: “And all the people, when they saw, gave praise to God.” We get to share in this as well when we see our corporate prayers granted and faith rejoices because Jesus is true to his promises. You also share in this joy and strengthening of faith when you confide in one another, and pray for one another’s troubles, and rejoice with one another when Jesus answers your prayers. When Jesus grants our requests he not only gives us what we’ve asked for, but he also upholds the Word in answering prayer, and thereby he strengthens faith. Then prayer proceeds even more readily, founded on the bedrock os God’s Word and Jesus’ merits.

By the end of the reading the blind beggar sees, and all the people also see. Jesus has opened all eyes in preparation for his passion, that we might see and understand what he does for us. Jesus proceeds to the cross, to fulfill God’s Word and to merit grace. And based on these two – God’s Word and Christ’s merit – he has gotten for us salvation and given to us the great gift of prayer. Amen.