The judges in the book of Judges are individually shadows of Christ, and taken together are a more defined shadow. Othniel is a rather vague shadow of the torso; Ehud adds the shadow of a leg; Deborah, the other leg; Gideon, the arms; Jephthah, the head; and Samson, the cross.

But before we get into the third cycle, we must meet Shamgar.

31 And after him was Shamgar son of Anath, and he struck down six hundred Philistines with an oxgoad. And he also saved Israel.

But why should our mouths stop just because God’s Word has? We could write a book called “The Three Success Secrets of Shamgar.” (This is a real book, and his success secrets are: start where you are, use what you have, do what you can). After all, why would we learn the Commandments or the Creed when we could speculate and blow wind? We could write a children’s book: “Shamgar and the Ox Goad” (also a real book). Why would we tell a clear story from the book of Judges – like the account of Ehud – when we could project our guesswork onto the text of Holy Scripture, and, while we’re at it, instill in our children a love of biblical fiction instead of a love of God’s Word?

The Apostle John writes toward the end of his account of the Gospel: “Now Jesus also did many other signs before his disciples, which are not written in this book; but these things have been written that you may believe that Jesus is the Christ, the Son of God, and that believing you may have life in his name” (Jn. 20:30-31). The Church loves the things that have been written; they give her faith and life. Beware those who love the “many other” things, which have not been recorded. If you pay them heed, you will only hear the empty opinion and vain ramblings of man.

And now on to the third cycle:

1 And the sons of Israel again did what was evil in the eyes of Yahweh after Ehud died.

So the cycle begins again. We know that the land had peace for eighty years after Ehud saved the sons of Israel from the hand of Eglon king of Moab (Judg. 3:30). Sometime, likely during these years of peace, the sons of Israel grew complacent (assuming that the note in the first cycle, “they forgot Yahweh their God,” is part of the first stage in all the cycles of the book of Judges). They forgot their former oppression and slavery. A new generation arose which did not know what the Lord had done, how he delivered them and gave them the peace that they enjoyed. This is another failure of parents to bring up their children in mind of what the Lord had done to save them (you can read more on that in the fourth part of this series on Judges). 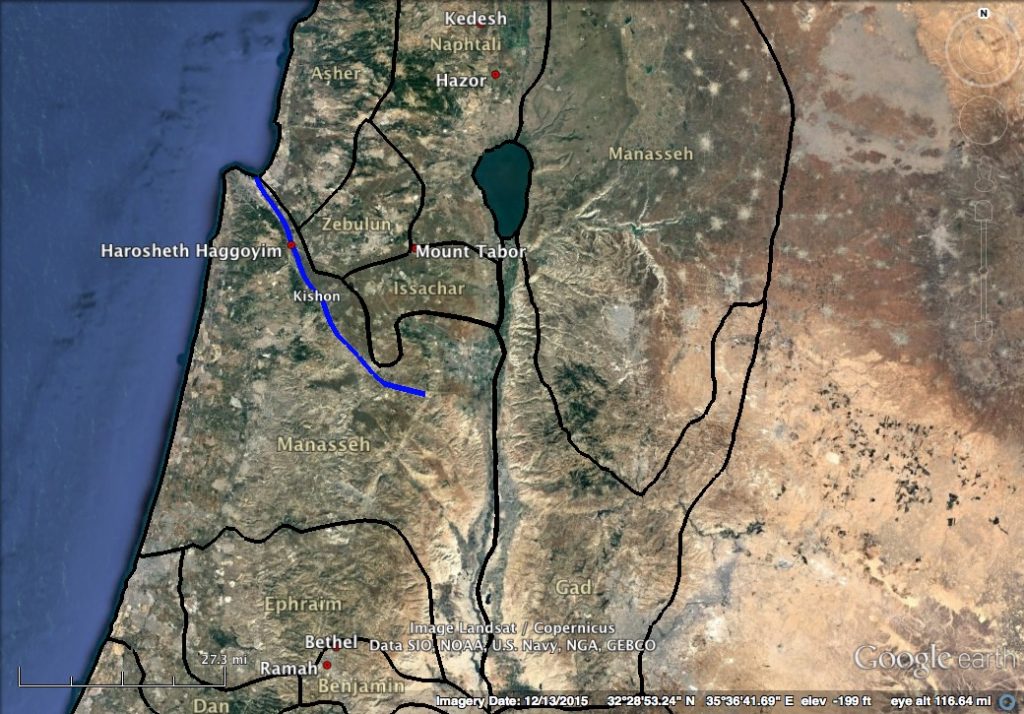 2 And Yahweh sold them into the hand of Jabin king of Canaan, who reigned in Hazor. And the commander of his army was Sisera, and he was dwelling in Harosheth Haggoyim.

This is the second stage of the cycle, when the Lord sells off his people to an enemy. And here’s a name we’ve heard before: Jabin king of Hazor. Hazor had formerly been the head of a great alliance. A certain Jabin king of Hazor had summoned many nations against Israel in northern Canaan during the time of Joshua’s military campaigns (Josh. 11), which took place about 180 years before the battle recorded in Judges 4. Jabin sent to the king of Shimron, the king of Achshaph, the kings in the northern hill country, and in the Arabah south of Chinneroth, and in the lowland, and in Naphoth-dor on the west, and to the Canaanites in the east and the west, the Amorites, the Hittites, the Perizzites, and the Jebusites in the hill country, and the Hivites under Hermon in the land of Mizpah. It says, “And they came out, and all their camps with them, a numerous people, in multitude as the sand that is on the shore of the sea, with a very great cavalry and chariotry.” (Josh. 11:4).

Joshua fought them at Merom (very near both Kedesh-Naphtali and Hazor, which are mentioned in Judges 4). Joshua hamstrung their horses and burned their chariots, and captured Hazor and struck down Jabin with the sword and burned the city with fire. It was a great victory and secured the northern region of the land that the Lord had sworn to give to the patriarchs.

But faithlessness has a way of bringing up enemies who are supposed to be dead. Egypt was supposed to be drowned and forgotten. But when the spies brought back a bad report of the land in Numbers 14, the congregation of the people purposed to choose a leader to take them back to Egypt. Here in Judges 4, the city of Hazor is suddenly rebuilt, and of all the men who could have been king of the once-destroyed city, the king’s name had to be Jabin. Jabin king of Hazor: lord of the necropolis.

Harosheth Haggoyim means “forge of the nations.” Jabin’s army had nine hundred chariots of iron, and this forge, located along the Kishon River, is presumably where they were made.

3 And the sons of Israel cried out to Yahweh because he had nine hundred chariots of iron, and he had oppressed Israel for twenty years.

This is the third stage of the cycle, when the sons of Israel pray to the Lord because of the oppression that they suffer.

When the first Jabin king of Hazor fought against Joshua, he fought with chariots that could be burned (I think it’s safe to assume that his chariots were made of wood). The second Jabin king of Hazor has made a great technological advancement: his chariots are made of metal. They are impervious to fire; indeed, they are born out of fire! And they are impervious to a great many other things as well, whether sword strokes or spear thrusts or sharp projectiles. With these nine hundred chariots of iron, Jabin and Sisera dominated the surrounding peoples, specifically the sons of Israel. It seems that Hazor was well on its way back to its lost glory, with a reincarnate Jabin to lead it.

4 And Deborah, a woman, a prophetess, the wife of Lappidoth: she was judging Israel at that time. 5 And she was dwelling under the Palm Tree of Deborah, between Ramah and Bethel, in the hill country of Ephraim; and the sons of Israel came up to her for judgment.

Typically in the cycles of Judges, this is where we would expect the line: “Yahweh raised up…” a certain savior. In this third cycle, however, instead of the usual line, we have an abrupt transition to an existing judge.

While each cycle has a character who falls into the general classification of “judge” (see the overview of the cycles in Judg. 2:16-19), typically the “judge” was known for accomplishing a great military victory, and not necessarily for pronouncing judgments in court. For example, in Judges 3:10 it says of Othniel, “And the Spirit of Yahweh was upon him, and he judged Israel and went out to war.” The term “judge” seems to have included two main duties: first, what we usually think of when we think of a judge, namely, settling disputes, and second (and primarily in the book of Judges), leading the sons of Israel in military victory.

In this third cycle, these duties of judge are shared by several characters. Deborah is the judge in the traditional sense. She has what we might think of as a “court” at a set location in Israel. Barak fulfills the other duty of the judge, even though he is not called a judge: he will lead the sons of Israel into battle.

6 And she sent and called for Barak son of Abinoam from Kedesh Naphtali. And she said to him, “Has not Yahweh, the God of Israel, commanded: Go, and march to Mount Tabor, and take with you ten thousand men from the sons of Naphtali and from the sons of Zebulun, 7 and I will draw to you – to the stream Kishon – Sisera, commander of the army of Jabin, and his chariotry and his infantry, and I will give him into your hand?” 8 And Barak said to her, “If you will go with me, then I will go; but if you will not go with me, I will not go.” 9 And she said, “I will surely go with you. However, your fame will not happen on the road that you are treading, for into the hand of a woman Yahweh will sell Sisera.”

Enter Barak. He will serve as the warrior and savior in this third cycle. Now it seems that the Lord had already made it clear to Barak what he was to do. Whether the Lord spoke to him directly, through a prophet, or through Deborah, we do not know; whatever the case, it appears that this is not the first time Barak has received these instructions.

The Lord has promised victory to the sons of Israel under Barak’s leadership. Yet for some reason, Barak hesitates. He will not go based purely on the Lord’s promise, but says he will only go on condition that Deborah accompanies him. Deborah agrees to go with Barak. But she makes it clear that he should be ashamed of himself: his hesitancy has led him to ask a woman to accompany the army. Because of his request, he will not have the fame of battle: to his shame, the Lord will sell Sisera into the hand of a woman (more on this later).

Now before we proceed, I should note what we can and cannot say about Deborah based on her title “prophetess.” Some vulgar people might use Judges 4:4-7 in support of the ordination of women, which is to obliterate clear passages of Scripture with an obscure one. What do we know about Deborah as a prophetess? Apart from her office as judge, as a prophetess all we really know is that she spoke a specific Word of God to a specific individual, namely Barak. Frankly, it’s not much to go on. What we don’t have is any instance of her prophesying to all the people, such as Moses or Jeremiah did.

The title “prophetess” is also used of Moses’ sister Miriam in Exodus 15:20. The only act that might be associated with the title is her singing of the Lord’s victory over Egypt at the Red Sea. Interestingly, Deborah also sings in Judges 5. There is also a prophetess Huldah in 2 Kings 22:14 and 2 Chronicles 34:22 (parallel accounts). When the book of the Law was found during the reign of Josiah, the king sent several royal officials, saying, “Go, seek Yahweh on my behalf and on behalf of those left in Israel and in Judah, concerning the words of the book that was found” (2 Ch. 34:21). The officials went to Huldah the prophetess who said, “Thus says Yahweh,” and proceeded to tell of the destruction of Judah. Here we have a woman speaking words from the Lord, as Deborah did. Here again, we have no instance of public preaching and teaching.

All this to say, the Lord has given specific messages through prophetesses; we have no instance of the Lord calling and sending a woman to teach and preach publicly. Let us focus on what we can say for sure about Deborah, and not turn silence into words, as certain malcontents have done with Shamgar.