Over 25 years as a pastor, I have had a number of World War II veterans as members of the congregations I have served. Homer Rouggly was one of them. In fact, Homer Rouggly might well be the last one that I will have the honor of laying to rest. That “Greatest Generation” is quickly passing away, and they were quite a crew.

By the way, for a number of years I had two World War II veterans sitting near each other in the pews at St. Matthew’s: Homer Rouggly and Albert Mertsch. The ironic thing was, they were both World War II veterans, but they had fought on opposite sides, Albert for his native Germany, and Homer for the United States. The fact that they were united as brothers in Christ and fellow members of his church is a testimony to the power of the gospel to reconcile people to God and to one another. Last year Albert died in the faith, and now it’s Homer’s turn.

And so it goes. One after another, the people we’ve known our whole lives slip away from us, and we feel the loss. For you in the Rouggly family, it’s been a double loss this year, first Dorothy in May and now Homer in August. Just three months apart. Married for 70 years, and then going home to the Lord within three months of one another. You who have known them your whole lives, as your father and mother, as your grandfather and grandmother, as great-grandparents and great-great-grandparents even, this is going to leave a void in your lives. But you will have all those wonderful memories to look back on, and that will help. And you will have one another to lean on for support. 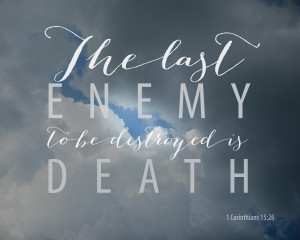 Even more, though, you will have the comfort of the gospel of Christ to strengthen you and to give you hope. That is the rock you can rely on that will never let you down. Because of what Jesus Christ did for you and did for Homer, you can have the sure hope of a joyful and eternal future. For in Christ we know that the final outcome has already been decided. The victory has been won. And “The Last Enemy to Be Destroyed Is Death.”

“The last enemy to be destroyed is death.” So says St. Paul in our reading from 1 Corinthians 15. Let’s put it in context. Listen again to this part of the chapter: “But in fact Christ has been raised from the dead, the firstfruits of those who have fallen asleep. For as by a man came death, by a man has come also the resurrection of the dead. For as in Adam all die, so also in Christ shall all be made alive. But each in his own order: Christ the firstfruits, then at his coming those who belong to Christ. Then comes the end, when he delivers the kingdom to God the Father after destroying every rule and every authority and power. For he must reign until he has put all his enemies under his feet. The last enemy to be destroyed is death.”

In 1 Corinthians 15, Paul is talking about the resurrection of the dead: That it is real. That it will be a bodily resurrection. That it is tied to the resurrection of Christ himself. Because Christ Jesus died and rose again, therefore all those who trust in Christ and are united with him–they too will be raised from the dead. It’s a sure thing. And it will happen on the day when Christ returns. But it’s guaranteed even now, you can count on it, because of what Christ has already done.

Paul puts it in the language of destroying enemies. Christ has already won the war. The decisive battle has already been fought. The final outcome is guaranteed. There will still be some losses along the way. Even Christians will die, and they will keep on dying until the end comes. “The last enemy to be destroyed is death.” But the end of the war is in sight. There is light at the end of the tunnel. The resurrection is coming, the resurrection unto eternal life, when there will be no more death or dying, no more sadness or sorrow or loss. The resurrection is coming, because Christ has already won the victory for us.

How did Christ win this victory? What was the decisive battle? The key battle was fought on Good Friday. That was when Jesus died on the cross for the sin of the world. By his death, Christ destroyed death and brought life and immortality to light.

Sin, and with it, death, had entered the picture way back when, when our first parents, Adam and Eve, thought it was a good idea to disobey God and do what he had told them not to do. That was sin, and with it came death. “Dust you are, and to dust you shall return.” And so the curse descended upon mankind, and we’ve been sinning and dying ever since. We’re all affected. We’re all infected. And the disease is terminal. 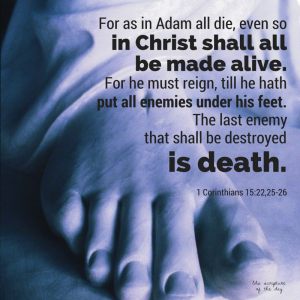 But God in his great mercy planned for our salvation. He would send his own Son into the world to redeem us, liberate us, from our captive condition. The war was on. Help was on its way. It’s an Army of One: One man to do the will of God perfectly, fulfilling the righteousness mankind needs to be right with God. One man to take the punishment that our sin deserves, to take it in our place, thus satisfying God’s justice. One man to stomp the devil on the head, even as his own heel and hands would be nailed to a cross. It is the one man Jesus Christ, the Son of God come in the flesh. “For as by a man came death, by a man has come also the resurrection of the dead. For as in Adam all die, so also in Christ shall all be made alive.”

And so that was the decisive battle, the battle Christ won for us on Good Friday. And that he had accomplished his saving mission–this became apparent on Easter Sunday, when Jesus rose from the dead, the empty tomb showing forth the triumph of the cross. “The strife is o’er, the battle done; now is the victor’s triumph won; now be the song of praise begun. Alleluia!”

So what about us? What about Homer? Well, we know that Homer and all of us who trust in Christ, who have been baptized into Christ, joined to Jesus in Holy Baptism–we know that we will share in his victory. This is the “Greatest Re-generation,” our new birth as baptized Christians. Now our future, our eternal future, is tied to that of Christ, who himself was raised from the dead and now lives forever. Because he lives, we shall live also. 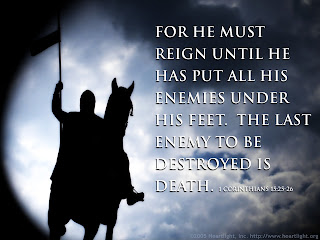 Christ lives and reigns to all eternity. He is reigning even now. Having ascended into heaven, he now sits at the right hand of God the Father Almighty, ruling over all things for the good of his church. “For he must reign until he has put all his enemies under his feet. The last enemy to be destroyed is death.”

And so we wait for a while, until that day when death will be no more. But we know that day is coming, because Christ is coming, and we belong to him. This gives us great comfort and great hope, even in the times of loss and sadness–especially in those times. Like now.

Let me close with an analogy, fittingly enough, to World War II. It’s not original with me; a theologian named Oscar Cullmann came up with it years ago. Cullmann was talking about when it was that World War II was effectively won. The official end of the war came in 1945, but he says the war was effectively won, for all intents and purposes, a year earlier, when the Allies successfully landed on Normandy beach and thus gained access to all of Europe. That of course was D-Day, June 6, 1944. The war would rage on for another year, many more battles would be fought, many more lives would be lost. But the decisive battle had been fought, and the final victory was only a matter of time.

So it is for us Christians. Jesus our Savior, that Army of One, established his beachhead on Good Friday and Easter. That was the decisive battle that ensures the final outcome. The war has already been won. We’re just waiting for the trumpet that will sound the Victor’s return. And when he comes, Christ the Victor, he will raise up our mortal bodies to be like his glorious body. Homer, too, will be there. And Dorothy. And Albert. All those who have trusted in God’s promise of salvation in Christ. We’ll all be there, with Christ, with all of God’s people. “Then shall come to pass the saying that is written: ‘Death is swallowed up in victory.’”

Dear friends, we do not grieve as those who have no hope. We have hope, the sure and certain hope of the resurrection. Homer knew this hope. He knew the war had already been won, and that he will share in the victory. As a young man, Homer Rouggly had experienced what it was like to celebrate the victorious end of a war. And now we look forward to celebrating, with Homer, the far greater victory celebration to come. “Thanks be to God, who gives us the victory through our Lord Jesus Christ.”